Writing
After taking a short break from Texas Living magazine (simply because I was too busy keeping my head above water to write and send my editors any pitches), I started back at it this month with an article about a topic near and dear to my heart: the many Ferris Wheels worth visiting across the Lone Star State. This article won't come out for quite a few months, but working on it was a lovely way to spend some of my writing time this summer.

Reading
If you only had 100 words a day, what would you do to be heard? Set in an America where half the population has been silenced, VOX is the harrowing, unforgettable story of what one woman will do to protect herself and her daughter. 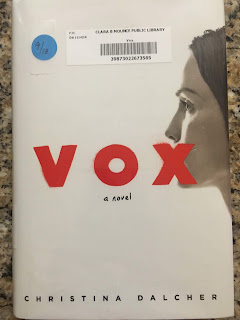 As I prepared to write about my most recent read - VOX by Christina Dalcher - I read a few reviews online and was surprised to discover that most people either LOVED or HATED this book. After a great deal of consideration, I decided I didn't fall into either camp but certainly liked and disliked different aspects. On the like side, the book kept me completely engrossed from page one - I finished it in less than four days and even took it to the gym with me. On the dislike side, the premise was disturbing, the plot development painful to digest, and the ending abrupt and under developed.

It's easy to say, "this isn't a realistic scenario". It's easy to say, "this kind and severity of systemic discrimination couldn't happen here." I said both to myself as I began the book. But as I immersed myself in Dalcher's novel, I found myself following - and worse, understanding - how the America in which the characters live came to be. I think this is an important read, regardless of gender, race, sexuality, religion, or political stance.

Watching
It's ba...ack! America's Got Talent has returned and the kids and I are laughing and crying our way through the auditions episodes. I can't think of a two-hour window during which I hit more emotions, and I think the photo series below offers a glimpse into the emotional roller coaster the kids experienced last week. 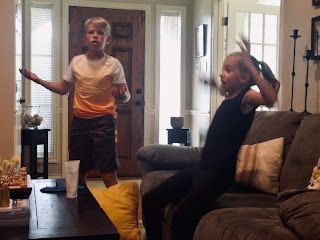 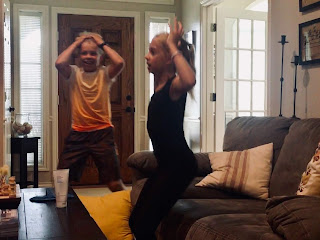 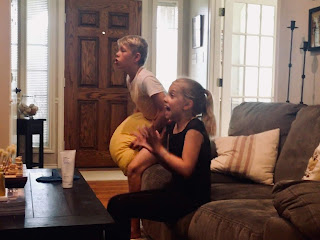 On the movie front, the kids and I saw Aladdin in the theater. I expected to enjoy the experience and feel satisfied by the overall quality of the film - Disney doesn't make a lot of poor movies - but I, like many fans of the original, was a little worried about Will Smith taking over the role of Genie from the iconic Robin Williams. I needn't have worried. Will Smith made the role his own, bringing his own sense and style of humor as well as an emotional depth and breadth I didn't know he had as an actor. I laughed out loud multiple times, but also shed a tear or two. Beyond Will Smith, I thought the movie was well cast with talented but relatively (if not completely) unknown actors and I loved the dynamic, vibrant sets and vivid, outrageous costumes.

Listening To
I tried a few episodes of the podcast Unexplained, but I haven't yet decided if I'll stick with it. Up next on the docket: on my own, Terrible, Thanks for Asking by Nora McInerny, and with the kids, This Podcast Has Fleas. Any suggestions for intriguing, engrossing podcasts or stories for Tom and me to listen to while on the road this coming month?

Wearing
I strongly dislike shopping at Walmart, however I occasionally pop in when waiting on one of the kids at the nearby dance studio and/or soccer complex. Earlier this month I stopped to look for a rug at the recommendation of my mom, and I managed to spend $50 in the women's clothing department on 8 - EIGHT! - pieces I legitimately like. I came home with three basic tank tops, two basic v-neck t-shirts, a pair of workout shorts, a pair of lounge shorts, and a romper, all of which are perfect for summer. And since they didn't cost an arm and a leg - more like a finger or a toe - I can wash and wear them regularly this summer and not worry if they wear out, they shrink, or I no longer like how they look or the style next summer. I never thought I'd say this, but Walmart for the win!

Trying/Using
For years I have been waiting for Fitbit to create a fitness tracker that could be worn both on the wrist and on a clip elsewhere on the body. FINALLY they got the job done with the recently released Inspire, and Tom, knowing how long I'd waited for such a device, bought me one for Mother's Day. I started wearing it about halfway through May but wanted to give it a bit more time before I weighed in; now at seven or so weeks in, I feel confident recommending the Inspire. It isn't the most glamorous or complex of Fitbit's products, which means it also isn't the most expensive of Fitbit's products. It gets the job done, however, and with its lengthy list of capabilities I highly recommend it! 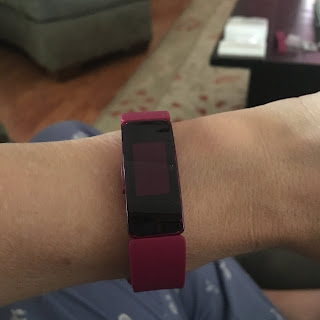 Also on the fitness tracker front, Will bought this one from Amazon and has been really happy with his purchase. He and I regularly compete to see who can take the most steps each day - he generally wins days on which he has soccer practice but I win the others - so he primarily uses that feature along with the watch, stopwatch, alarm, and sleep tracker.