One
Audition/tryout season for the Ferris family is OVER! Throughout the last six weeks, the kids have gone through auditions/tryouts for dance, soccer, orchestra, and musical theatre camp. I imagine the stress and anxiety they felt surpassed the stress and anxiety I felt...actually, no. Because Will and Hallie started early, they aren't afraid to put themselves out there. They experience the occasional and expected jitters, but aren't - like me - paralyzed with fear over what may or may not transpire. (Last year I wrote a post about the challenges - and benefits - associated with tryouts and auditions. It remains one of my favorite posts out of the 1,500+ up on Chasing Roots.) I feel so much calmer now that we have many of our placements for this coming year and the kids can just relax and enjoy dancing, playing soccer, and their musical pursuits.

Two
We had great luck with last and this week's camps, lessons, and intensives. The kids loved their coaches and teachers, learned a tremendous amount, and had a lot of fun at sports performance training, basketball camp, swimming lessons, and a dance intensive. And after all that activity, I'm looking forward to next week, when our pace will slow slightly. (Whenever possible, I try to find a balance between busy weeks and slower weeks throughout the summer months.) 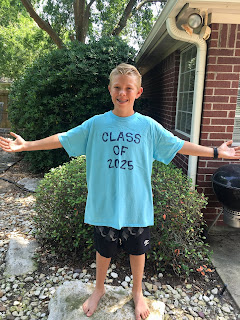 Four
Will and I can't get enough of the World Cup. We have the television on and turned to Fox Sports from 10am until 5pm every day, and our DVR is working almost as hard as these incredible athletes trying to keep up with recording every game so Will can watch all of the goals. (I need to teach him about highlight shows...) I have always loved watching soccer (comes with playing the sport for 15 years, I suppose), but watching it with Will - who shares my passion - is even better and one of my favorite ways for the two of us to spend time together.

Three days before the World Cup started, I Googled "how to watch the World Cup" so I could figure out which networks would show the games. Do you know what came up? NOT ONE article about how to watch the (Women's) World Cup kicking off just three days later. NOT ONE article about the US (Women's) National Team that is the most successful in international soccer EVER, with three World Cup titles and four Olympic Gold Medals. Nope, the articles Google showed me were all about last year's Men's World Cup, for which the US Men's National Team didn't even qualify. I was beyond frustrated.

Because doing makes me proud and helps me feel better about the future of our country, I have mentioned this before and will mention it again... When Will watches the "Women's" World Cup or the US "Women's" National Team, he doesn't feel the need to add the extra word. He's not watching women athletes. He's just watching athletes, and they deserve that title.

Five
On Sunday night we said goodbye "see you soon" to some of our best friends as they embark on a new adventure in Oklahoma. 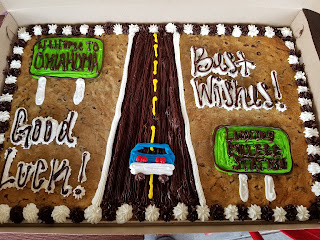 We met Nuria, Javier, and Paloma through mutual friends a year or two after moving to Texas. Paloma and Will are the same age and in the same grade and Paloma dances at the same studio as Hallie (and they were in Mini Company together Hallie's first year), so both kids consider her a friend. Tom and Javier both worked for TAMU as engineering professors, so they share quite a few interests and personality traits. And while I have no idea why Nuria decided she and I should be friends (my baked goods may have factored in), I fell in love with her unabashed sense of humor, unbridled honesty, and unending generosity. We hate that they're leaving and will miss them terribly, BUT we are tremendously grateful for the many years of friendship we've shared and know we will keep in touch across the miles that will soon separate us.
Posted by Chasing Roots at 5:00 AM