Writing
I didn't accomplish as much as I would have liked this month, but I stayed afloat. Sometimes that's enough, right? Right?

Reading
I had big plans to read multiple books over spring break, but for the same reasons I didn't write much in March, I also didn't read much in March. I did, however, finally have the opportunity to finish a book that has held a top spot on my "to read" list for years: The Zookeeper's Wife, about Polish zookeepers Jan and Antonia Zabinski, who used their one resource to save more than 300 people from the certain death at the hands of the Nazis. The Zookeeper's Wife tells an incredible story of bravery and compassion...and it happens to be true. 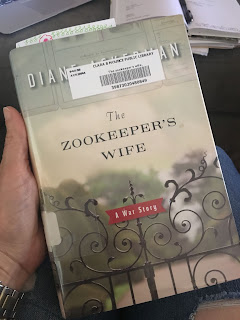 Watching
While Tom's dad and brother were visiting, we watched Free Solo, a documentary chronicling rock climber Alex Honnold's quest to scale Yosemite's El Capitan...without the support and/or security of ropes, harnesses, or protective equipment. The film received multiple nominations and awards, and I can definitely understand why; if you find yourself searching for an exciting, educational, inspirational, and family-friendly (though the movie does include a few swear words), you can find Free Solo on Amazon Video or National Geographic.

Did you hear? The Babysitters' Club (as a live-action series, I believe) is coming to Netflix and I can't wait! News that Netflix plans to release only one additional season of Fuller House crushed both Hallie and me, so learning about the streaming service's plans to bring back The Babysitters' Club lifted our spirits a little.

Listening To
I finally finished season one of Up and Vanished, and while I thought about switching gears and listening to something a little more inspirational and uplifting for a few weeks, in the end I dove right into season two. I promise to have a new podcast recommendation in April's Monthly Medley!

Wearing
I love my new soccer mom (though the message would work for any team sport parent) shirt. 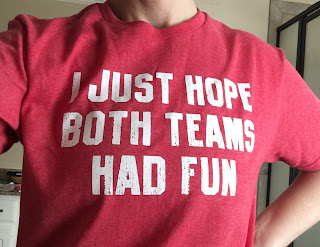 Will, on the other hand, doesn't appreciate the humor. Perhaps because he's just like me, and doesn't yet know that my plan is to personalize my shirt by adding to the back, "Just kidding. I'm not that kind of mom."

I bought this shirt from 6 Dollar Shirts, which seemed to me like kind of a sketchy company at first, but in the end I was incredibly pleased with the ease of ordering, speed of delivery, and quality of shirt. I have no affiliation with this company - I'm just a happy customer!

Trying/Using
In need of new carpet? We purchased Stainmaster from Lowe's, and are thus far extremely happy with the product. I have also been pleased with the Lowe's installation team - this was our third flooring purchase from Lowe's throughout the last eight years, and each time we've had the same professional, courteous, efficient team of installers.

Eating/Drinking
No new recipes this month (a week of sick family members followed by spring break and almost two weeks of company meant I stuck with my tried and true recipes), BUT...a few weeks ago some friends and I sampled this beer at a local tasting. We usually have differing opinions when it comes to this kind of beverage, but Wittekerke Wild received an overwhelmingly positive review from almost everyone. It's light and bright and perfect for spring! 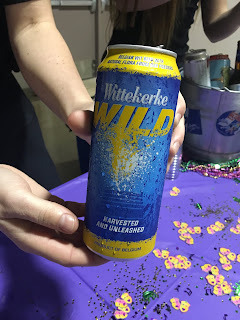 What's new or exciting in your life this month?
Posted by Chasing Roots at 5:00 AM