One
Our weekend certainly didn't go as planned, but with Hallie's injury came unexpected "free time" that she and I spent sleeping in, watching movies in bed, going for walks, shopping for her Daddy Daughter Dance dress and shoes, helping Tom pick out a suit, and playing board games. With the promise of holding our annual garage sale/lemonade stand and making the trek to IFLY and the Magical Unicorn Dessert Bar (all activities that we had planned for last Saturday and Sunday) later this spring, Hallie was able to enjoy the weekend as well.

Additionally, at our ortho on Monday morning we learned that Hallie wouldn't need a cast and could get by wearing just her brace for a few weeks. At first Hallie was a little disappointed about not having her wrist casted (she really wanted her friends to sign it), but after I explained that casts are like crutches - they sound fun and are even kind of cool to have/use at first, but after a few days the novelty wears off and you find yourself counting down the days until you can get rid of them - she agreed that staying in the brace sounded much like a much better course of action.

Two
A couple of months ago, an children's author named Crystal Allen visited several of our local schools to talk to the students about her career as a writer. She also shared with them an opportunity to compete in her Strikewriters writing competition. Will and his friend, Ben, wrote a story and submitted it to the competition, and that story was chosen as one of their school's winners. Last Thursday the boys and the other winners had lunch with Ms. Allen, received a signed copy of one of her books, and had their stories posted on her website: www.crystalallenbooks.com (click on the Strikewriter tab and scroll down to Cypress Grove Intermediate School). Yet another valuable opportunity provided to our students thanks to our fantastic school district!

Three
Hallie's story wasn't selected as one of her school's winners - a tough day in the House of Ferri - but on Friday she did receive an Outstanding 'Rangler award for being "respectful, responsible, and reaching for success". A proud week for me as a mama!

Four
On Tuesday evening, Will and his seven-member strings ensemble shared the piece they've been working on - almost entirely on their own - throughout the semester. It's hard to believe how far these kids have come in just a year and a half, and I look forward to hearing even more music from them in the coming years. Will surprised me by choosing to stick with the cello in 6th grade, instead of switching to percussion in band, but the amount of practicing he's done both at home and at school this year has proven how much he loves his instrument and orchestra in general. 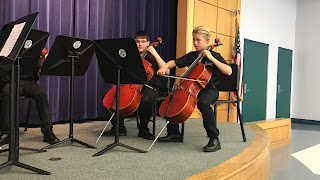 Linking up with High Five for Friday here.
Posted by Chasing Roots at 5:00 AM