I mentioned in last Friday's High Five post how it could easily and perhaps more appropriately have been replaced by a Five Fails posts.

Here's how all the things failed us last week...along with the upsides that kept me hanging on to the end of my rapidly fraying rope!

1. We replaced our old - and suddenly leaking into our closet - water heater in March...and the new model continues to malfunction. (For two months we've had to relight the pilot every few days, and while at first the problem seemed like a fluke, it has now become much more than a fluke.) It went out on Sunday and again on Friday.

The upside? Will is getting really good at lighting the pilot, our ridiculously hot weather makes cold showers less miserable, and we're one step closer to getting it fixed. (I realize it should be easy to get the water heater fixed given the fact that the appliance is nearly new, but there are some strange details in play here that make the process a little more complicated.)

The upside? After quite a few hours spent working on the system (which involved sitting in the lawn among the fire ants and under the blazing sun), Tom used his engineering problem solving skills to repair/replace and reconfigure all three broken sprinkler heads on his own.

3. Will's phone - and its charger - started the downward spiral toward certain death.

The upside? A system update seems to have given the phone a renewed lease on life, which gives us hope we can wait two months to replace it for his birthday. We like that Will's phone is ridiculously old and inexpensive because we don't worry much about him losing it and it has very few capabilities other than texting and calling, which is what we want for him. I was worried we wouldn't be able to find those features (or lack there of) in a replacement, but when I popped into Sprint last week I found a phone that while new, is relatively inexpensive and fairly lockable in terms of what Will can access.

4. Our freezer stopped doing its job, and I spent a couple hundred dollars to have the appliance repair company try to fix it...which they could not.

The upside? The freezer didn't completely die (it basically turned into a refrigerator) and we have a back-up freezer, so we didn't have to panic about what to do with all of the frozen food while I shopped for and found my new refrigerator...which I LOVE. Also, both Tom and I hated our old refrigerator - its design was poor, it had a faulty ice maker/water dispenser (that we tried unsuccessfully to have fixed), and a couple of years ago it leaked into the back wall of kitchen to the point that we had to have the kitchen wall redrywalled and the wood floor in the office (the next room over) replaced. It's been a money-suck since the beginning, so we waved goodbye to that appliance with smiles on our faces. 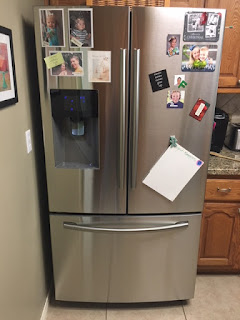 5. The orthodontist decided the time has come to put Will in braces. We thought we had more time since Will still has a couple of baby teeth left to lose, but when the orthodontist looked in Will's mouth at his annual check-up (Will had some orthodontia done a few years ago but for the last three years we've just been in a holding pattern) he decided we needed to move forward immediately to prevent a specific problem from getting worse.

The upside? Will's braces are going on on Thursday so he'll have more than a week to adjust to them before school starts. Also, our dental insurance, while not the best around in terms of provider flexibility and dental work, actually offers a small amount of coverage for braces which will make this expense a little less painful.

6. Hallie's desk chair - the one that matches her desk and dresser and that we've waited on for MONTHS - arrived...defective.

The upside? A second new chair is on its way! We're crossing our fingers it arrives before Hallie returns to school and the homework begins...

7. And last but certainly not least, Tom's car finally took its last breath.

The upside? We replaced it with a Ford Escape that, at least thus far, works well for him in terms of both people and music/disc golf gear transport. I have yet to ride in Tom's new car, but the kids say it's quiet, comfortable, and has great acceleration!

To be clear, I completely understand that these kinds of things happen. We plan for them as best we can. We deal with them when they arise. And we try not to let them get us down. But when they all happen back to back (to back to back), I can't help but feel a little ganged up on. Thankfully, Tom and I usually worry about completely different aspects of life. And when we do worry about the same aspects of life, we worry in completely different ways. He took all of this in stride, and not only kept me from losing my mind but helped me recognize the opportunities these problems presented. I'm thankful for a husband who can turn fails into fives!
Posted by Chasing Roots at 5:00 AM