I Survived...But My Dress Did Not 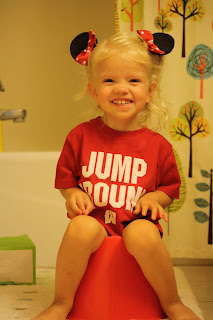 I potty trained Will and Hallie, so I get it: kids have accidents. In what were not their proudest moments, Will peed in the video game aisle at Target and Hallie lifted up her dress, dropped her underwear, and peed all over the patio at a local Mexican restaurant. My niece, Lily, visited me right after after she began potty training and over the span of five days peed in six or seven rooms of my house (I only have three toilets, so you do the math...) as well as in the parent waiting area of the gym and the little girls' department at Old Navy. Oh, and Lily also pooped in a display toilet at a home improvement store. All that to confirm that I get potty training - the drama, the trauma, the whole nine yards.

But y'all...until two weekends ago I had completely forgotten about all that.

Hallie's dance recitals were held in an auditorium on the TAMU campus. Hallie had five dances in the Saturday night recital, so we sat up close for that show. She had fewer dances in the two Sunday shows, however, so we sat toward the back in the "cheap seats" where families who have crying babies, wiggly toddlers, and potty training preschoolers might choose to sit in order to easily come and go without causing a disruption.

While watching the third show, a rather tall gentleman sat down right in front of my mom, blocking her view. She leaned over and whisper-asked me to move over one seat so she could see better. Because I wasn't sure one seat would be far enough, I moved down two seats and we all settled in to continue watching. About 15 minutes later, another tall gentleman sat down front of my mom. Again, she whisper-asked me to move over a seat. But this time, when I stood up I felt the back of my dress swing against my legs...and damply stick to the backs of my thighs. I assumed someone had spilled a bottle of water in the seat, but thought it best to verify; as I moved down two more seats, I discretely pulled the back of my dress around me and bent down to give it a sniff.

I had been sitting, for the better part of 15 minutes, in someone else's pee.

My dress, the backs of my legs, and my hand were covered in someone else's pee.

I have no idea how I didn't notice the seat was damp when I first sat down - my best guess is that the surface of the seat had dried but the inside of the cushion still held on to the moisture it had previously absorbed.

Just as I made this shocking, traumatizing, and repulsive realization, my mom started to sit down in the pee seat. I freaked out - as quietly as possible - and grabbed my mom's arm, pulling her to a different seat. I whisper-explained my predicament, and quickly left the theater in search of...something.

None of the bathrooms in the theater had hand dryers, so I couldn't rinse my dress and dry it under the hot air. The shirt sales table had closed, so I couldn't purchase an extra large recital shirt to wear as a dress. So I just walked around the nearly empty theater, feeling disgusting and waiting for my dress to dry, until I also found someone I trusted to tell me honestly what my dress looked like from behind. When she assured me my dress just looked slightly damp but not at all yellow, I decided to go back into the theater. I couldn't sit down though, so I knelt on the floor behind my mom and Lily (no one was sitting in that row) until my legs fell asleep/the finale wrapped.

I couldn't wait to get home for a long, hot shower and to burn my dress, but first we had to pick up Hallie backstage. Thankfully, some of my fellow Mini Company mamas had a glass of Prosecco waiting for me; I would have enjoyed the beverage and toast anyway, but cheers-ing to "WE SURVIVED RECITAL" took on a whole new meaning that night.

So yes, I survived recital...but by the slimmest of margins thanks to a toddler/preschooler who just couldn't hold it and needed to remind me of the drama, the trauma, the whole nine yards that come with potty training.

The story about Hallie peeing on the patio can be found here.

The story about Lily pooping in a home improvement display toilet can be found here.

And for those of you wondering about Will peeing in the video game aisle at Target... I dropped Tom and both kids off in the Target toy department so I could finish my shopping. About 15 minutes later I received a panicked call from Tom: "we have to go. NOW. I'll pull the car up and meet you outside." He hung up quickly so I didn't have time to ask for additional information; I suspected, however, that Hallie had had a meltdown - par for the course during her toddler and preschool years - so I paid for my items, gathered my bags, and headed out through the double doors. Tom had already parked the car in front of the store, so I hopped in and away he drove. Just as I started to ask Tom about our abrupt departure, I realized that 1) Hallie was completely calm and 2) Will wasn't wearing any clothes. "What in the world happened?!" I exclaimed.

"Um, Will peed all over the floor while playing one of the video games in the toy department."

I asked for clarification and Tom explained that Will must have gotten so engrossed in the game that he didn't realize how badly he had to pee until he started going right there in the aisle. And after it happened, Tom didn't know what to do...so he just grabbed the kids and ran away.

By the time I had all of the information we were already half way home and it was too late for me to do anything about the pee-filled aisle. Maybe this dance recital incident was the universe's way of punishing me...
Posted by Chasing Roots at 5:00 AM