At least every other day for weeks, Hallie asked me, "Mama, do you think it'll snow tonight?"

And at least every other day for weeks, I answered, "No, sweetie, I don't. It doesn't snow in Texas."

I would remind her that even if it did snow, the sleet-like flakes wouldn't stick because the ground in Texas doesn't freeze, and I would remind her that fluffy white flakes awaited us up north. And then she would remind me that while she couldn't wait to make snow angels and build snow forts and have snowball fights once we arrived in Wisconsin, she would in the meantime hope and pray for snow here at home.

"Some of my friends have never even seen snow, Mama! I want them to know what it looks and feels and tastes like!"

And then last Thursday, her hopes became a reality and her prayers were answered.

On campus for Nutcracker technical rehearsal, my mom, a few friends, and I were sitting inside a window-less cafe drinking coffee when another friend joined us and mentioned that light flurries had begun to form outside. I thought she had to be mistaken because while we knew the temperature outside had dropped, it wasn't even close to cold enough - scientifically speaking - for snow to fall.

A short time later we finished our beverages and headed back to the theater to pick up our dancers...and when we walked out of the building into the dusky evening, we saw them: big, soft snowflakes swirling beneath the street lights. Not the hard, sleet-like snowflakes we've experienced twice during our seven years in Texas, but the kind of snowflakes that swoop down from the sky in Wisconsin. Without warning and completely unexpectedly, tears sprung to my eyes. Almost nothing feels as magical as the first snow of the year, expect perhaps the first snow in many years and for some, the first snow ever.
As we hurried into the theater to grab the girls - for fear the snow would cease and they would miss this monumental occurrence - college students streamed past us, calling and texting their friends and excitedly sharing the news. Thankfully, not only did the snow not stop while we gathered our girls, it actually became more intense: more flakes, bigger flakes, and flakes we could actually see on the grass. My mom, Hallie, and I, delighting in this sure-to-be-over-in-minutes taste of winter - laughed and sang Christmas carols all the way home.

After dinner we decided we couldn't stay inside any longer. We threw on winter coats and boots and ran out into the yard. Neighbors began coming out to join us, and there on our corner - in the streets and across the lawns - we lost ourselves in a winter wonderland.
So many friends of Will and Hallie's had never seen (or felt or tasted, as Hallie pointed out) snow like this. Some adult friends of mine had never seen snow like this. Nearly everyone I know took advantage of Mother Nature's gift that night, going outside - after dark, after bedtime, and on a school night - to experience the overwhelming joy and breathtaking beauty of a simple snowfall. 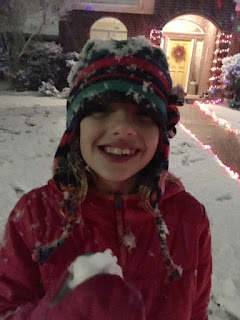 Many of my best childhood memories revolve around snowy, wintry weather. Sledding, ice skating, ice boating, building snowmen, having snowball fights, making snow ice cream. (I even enjoy shoveling.) Bundling up in snow pants and scarves...and then removing layer after layer as our bodies warmed. Playing outside for hours, even after our mittens dripped wet from melted snow and our socks slouched down into the toes of our boots. F...i...n...a...l...l...y coming inside to thaw our fingers and toes by the fire and warm our insides with hot chocolate. I have done my best to help Will and Hallie create these kinds of memories during our holiday visits to Nebraska, Illinois, and Wisconsin, but I never could have imagined how happy it would make me to see them creating these memories in - or outside of - their own home. And I couldn't help but think how incredible it was that all of these Texas kiddos were finally getting to create these kinds of memories as well.

I will always remember last Thursday night as one of the very best we have experienced as Texans. My fingers were cold, but my heart was warm.

P.S. Somehow school started on time on Friday morning. This is Will's "I'm shocked some of the snow remains, but I'm even more shocked I have to walk to school in it" face. Toughen up, kid - I walked a mile to school in 12 inches of snow more times than I could count. (No really, I did. Ask my mom. 😀) 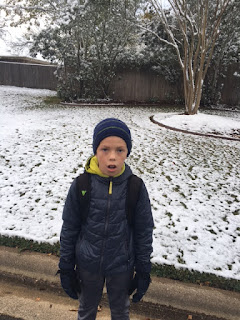