For the last few years, the kids and I, along with my mom and sometimes my dad, have been working our way through a South-Central Wisconsin bucket list of sorts. Along with Madison's most popular attractions, we've visited Circus World Museum in Baraboo, Mount Olympus Water & Amusement Park in Wisconsin Dells, Little Amerricka in Marshall, Troll Lake in Stoughton, the sunflower fields in Middleton, Miller Park (where the Brewers play baseball) in Milwaukee, and Cave of the Mounds in Blue Mounds.

This year we crossed The House on the Rock off our list of small town adventures and excursions. 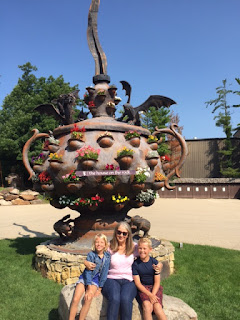 The House on the Rock opened in 1945 and over the years has become one of the most visited tourist attractions in Wisconsin. To give you an idea of its regional and even national popularity, we counted more than 20 different out-of-state license plates in the parking lot on the day of our visit.

Dreamed up and built by Alex Jordan, Jr. (who I might describe as a more eccentric, chaotic, and gaudy version of Walt Disney), The House on the Rock seemingly grows out of Deer Shelter Rock, a column of stone 60 feet by 70 feet by 200 feet nestled in a forested area near Spring Green. The house itself consists of an extravagant patchwork of dark rooms, narrow pathways, and cramped galleries that flow one to the next. The spaces were built like one might assemble a patchwork quilt: at different times, using different styles and materials, and without a master plan to guarantee a coherent final product. Beige shag carpeting meets - not at 90 degree angles but angles ranging from 60 to 120 degrees - walls of exposed stone and brick. (In some cases, these stone walls are made not by piecing together small, perfectly shaped stones but of the actual massive rock in which the house is situated.) Rustic wooden tables sit beneath hanging Tiffany lamps and next to a 1970s electric stove. A player piano cranks out an eery tune while the steady flow of a nearby waterfall keeps time like a metronome. Trees grow unimpeded through many of the dimly lit - but lit with electricity none-the-less - rooms. Nothing about the house makes sense, nor is it possible to adequately explain this cacophony of architecture in words...that's what makes it so ridiculously fascinating.
The highlight of The House on the Rock is the Infinity Room, which extends an unsupported length of 218 feet and 156 feet above the valley floor. The kids could have played out there all day; I, on the other hand, walked to the point, turned around, and walked quickly back to solid ground...well, as solid as one could consider a house built into a rock.

In addition to the house itself, The House on the Rock is home to a number of galleries in which Jordan stashed his abundant collection of bizarre...stuff.

Jane Smiley wrote this about the complex in 1993:

"It is hard not to be overwhelmed by the House on the Rock. The sheer abundance of objects is impressive, and the warmth most of the objects exude, the way that the toys ask to be played with, for example, makes the displays inherently inviting. But almost from the beginning, it is too much. The house itself is dusty. Windowpanes are cracked. Books are water damaged. The collections seem disordered, not curated. In fact, there is no effort to explore the objects as cultural artifacts, or to use them to educate the passing hordes. If there were informative cards, it would be impossible to read them in the dark. Everything is simply massed together, and Alex Jordan comes to seem like the manifestation of pure American acquisitiveness, and acquisitiveness of a strangely boyish kind, as if he had finalized all his desires in childhood and never grown into any others."

To give you a small glimpse into our experience... After strolling down the cobblestone streets and past the old fashioned storefronts in the "Streets of Yesterday", we paused to listen to a massive calliope - complete with animatronic musicians - crank out a lively melody. We then entered a tribute to all things nautical: a cavernous space, the walls of which were lined with naval artifacts, maps of the oceans, and models of ships. In the center of the room stood a GIGANTIC - perhaps three stories tall and 100 feet long - statue of an epic battle between an octopus and a mythical sea creature. Next we passed through a room filled with bicycles and hot air balloons on our way to the World's Largest Carousel (elaborately adorned with 269 handcrafted animals, 20,000 lights, and 182 chandeliers). Finally we wandered through multiple rooms filled to capacity with dollhouses, circus displays, guns, armor, music boxes, old fashioned wagons, organs, and enormous ship engines.
Can you picture it? I certainly couldn't before we set foot inside.

I doubt I'll return to The House on the Rock anytime soon as I don't get the impression the exhibits change very often, but I highly recommend the first two "levels" (the house and the first series of galleries - my mom and I agreed that we could have skipped the second series of galleries) to anyone traveling through Wisconsin.

One more excursion crossed off the Wisconsin Bucket List!

The kids wanted to sit in every single one of these - and there were A LOT - fortune telling chairs. The Throne of Passion labeled Will as "brain dead" and Hallie as "out of control"... 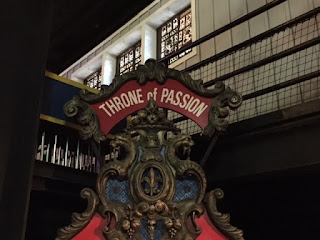 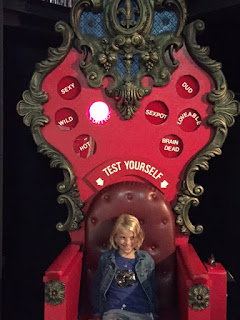 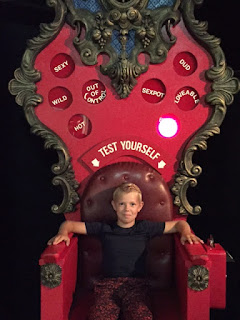