As you likely know, at the end of last week - Friday night, more specifically - Hurricane Harvey hit the coast of Texas just south of Houston, near Rockport and Port Aransas. According to a number of news and weather sources, Hurricane Harvey is:

Houston and many of the surrounding suburbs are devastated. The governor declared states of emergency for at least 50 counties, and though mandatory evacuations were issued for many of these counties, multiple people have already lost their lives as a result of this storm. 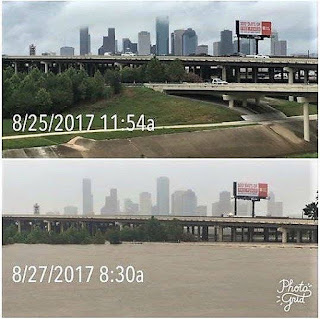 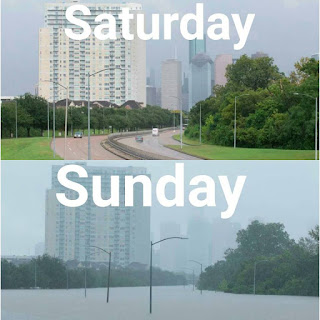 The four Ferri live in College Station, about 100 miles from Houston. While we - our family and our community - are feeling the effects of heavy rain for three straight days, we are safe. The National Weather Service has issued for our area multiple flash flood watches and warnings as well as an ongoing tornado watch and one tornado warning, but thus far nothing life-threatening has reared its head near us. Our backyard has flooded, but we rigged up two hoses to siphon water down our driveway and toward the street which has helped keep the levels from rising above what the grass and patio can handle. Our elementary school has multiple roof and door leaks, but we - my friend/neighbor/fellow PTO mom and I at the request of our principal, since we live so close - ventured up to school three times yesterday to position trash cans under roof leaks and put out dry towels in front of leaking doorways. The public schools and TAMU (along with our dance studio and soccer club) have all cancelled classes/practices and many businesses have closed, so we plan to stay close to home to keep an eye on the house, the yard, and Tux. (He does not like that his outdoor bathroom has closed for business and is taking it out on us.)

Sadly, the worst has not yet come to pass; meteorologists expect the rain to continue for days, which will only exacerbate the moderate flooding here in College Station (and in other cities across this region of Texas) and the devastatingly severe flooding in Houston. Additionally, multiple tornadoes have already touched down and more are expected to form.

Please, if you're the praying kind, say one for the residents of Houston and its surrounding areas who are struggling to save their homes or find peace with massive loss. Say one for the heroic first and second responders who have saved thousands of lives and whose job is no where near done. Say one for the mayors of our cities and governor of our state as they lead us through this crisis. And maybe throw one out there to Mother Nature, asking her to lighten up a bit.

And if you'd like to help in another way, might I suggest supporting the American Red Cross with either a financial contribution to the Disaster Relief Fund or a blood donation? Visit www.redcross.org, call 1-800-RED CROSS, or text the word HARVEY to 90999 to make a $10 donation. Visit www.redcrossblood.org or call 1-800-RED CROSS to schedule an appointment to donate blood. Donations of both kinds will enable the Red Cross to prepare for, respond to, and help people recover from this disaster.

I have a decades-long affiliation with the American Red Cross. If you would like to read about why I have supported - and will continue to support - this organization until my dying day, you can read my Red Cross story here.
Posted by Chasing Roots at 5:00 AM