After two weeks of cleaning out and reorganizing, a month of shopping for the larger furniture pieces, and another week of sewing curtains, shopping for the smaller furniture pieces and accessories, and pulling everything together with my mom, our playroom has officially become our family room! Or our music room. Or our famusic - as Tom suggested - room. We haven't landed on a name for the room quite yet.

To refresh your memory, this is what the room looked like shortly after we moved in: 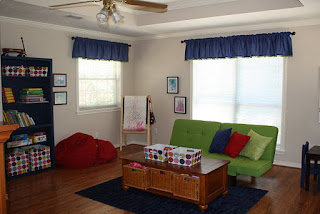 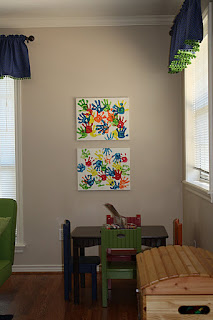 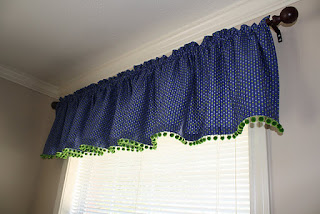 Aspects of the room changed every year or so, based on the kids' ages and interests. Hallie's art center grew, Tux joined the family (many of his supplies have to live in that room), we acquired the giant beanbag, and the kids and Tom started playing first the keyboard and then the drums. 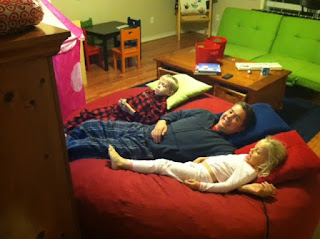 The room remained a playroom though, until one day I realized that very little traditional playing - other than an occasional board game on the coffee table - was actually going on in the space. Instead, Hallie created at her (too small for her seven-year-old legs) art table and Tom and the kids jammed and played video games. We just weren't maximizing the room's potential, or perhaps better put, the room no longer met our needs as a family.

In redoing the room I hoped to create a space that looked a little more "grown up" and in which the activities above (art, music, video games) could comfortably take place. I wanted a small but cozy and comfortable oasis where the four of us - me included, as previously I only entered the playroom to clean it - could rest, relax, and have fun together.

I think I came close!

This is the hardest room in our house to photograph because every wall has a window or doorway that lets in light. Hopefully I've edited the photos enough to show off the space's true colors!

As I type this post on a Saturday morning, Tom is playing the keytar, Hallie is singing into a microphone, and Will is playing Mario Kart on the Wii. And last night the four of us - plus Tux, on and off - watched a football game cuddled up together on the couch. Dare I say Mission Accomplished? 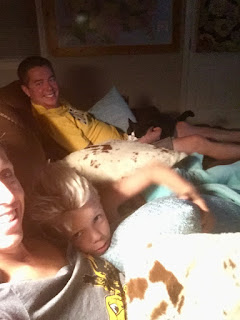 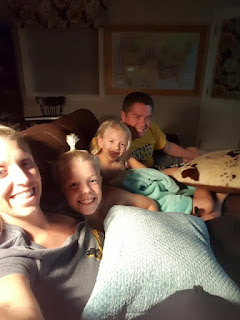