Congratulations to our Teal Pumpkin Project painting kit winner, Kelly, and thanks to everyone who entered! And don't worry - it's not too late to paint your pumpkin and pick up a few non-food treats in preparation for Halloween!

1. As I mentioned in Wednesday's post, Tom's parents and grandma came to visit last weekend. We had a great time catching up in between and during a soccer practice, soccer game, dance lesson, Nutcracker rehearsal, kid birthday party, adult birthday party, lunch with the kids at school, trip to the George Bush Presidential Museum, and outing to the pumpkin patch. As always, I am incredibly grateful for parents/grandparents on both sides who make every effort to stay connected to Will and Hallie...to all of us, really. 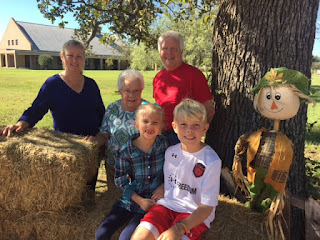 2. Last weekend Will's soccer team was tied 1-1 (he had the assist on his team's goal) with less than a minute left in the game. He stole the ball, and passed it to a teammate who passed it right back in a perfect give-and-go. Will continued dribbling down the left sideline, managing to get a cross off just before losing his balance and rolling down the slight embankment just past the goal line. From his vantage point - facedown in the grass - Will could only see the side of the net wiggle and hear the crowd cheer; because he couldn't see the ball, he thought his cross had come in short. Will stood slowly, his head hanging down in frustration, but then he started running - determined - back to his position hoping to get in one more attempt on goal before time expired. When he finally looked up, Will saw his teammates - who in the excitement hadn't realized he'd fallen - finishing their high fives and lining up for a kick off. The crowd had quieted by this point, so everyone on the field and sidelines heard Will exclaim, "Wait, what?! WE SCORED?!" His cross had passed directly in front of the goal and one of his teammates had knocked it in to make the score 2-1. The joy on Will's face and astonishment in his voice made me burst out crying and laughing simultaneously. 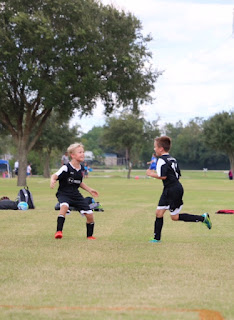 There is nothing better than watching your kids participate in - and succeed at - something they love.

3. While our weekend company played with the kids in the bus, Tom and I went out for drinks and dessert to celebrate a beautiful friend's birthday. Happy day to you, Natalie! 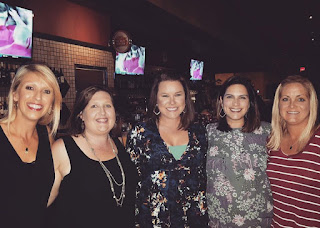 4. The official trailer for Gilmore Girls: A Year in the Life came out this week. Are you as excited as I am for the November 25th Netflix release of this revival?!

5. Last but not least and in place of Happiness Highlights... On Tuesday night - midway through Will and Hallie's elementary school's Red Ribbon Week (a national drug awareness campaign during which students dress up according to cheesy anti-drug-related catch phrases) - I came across this video. (I can only link to the Facebook page, so if the video isn't at the top of the feed, scroll down.) I couldn't help but laugh out loud as I listened this mother describe her week...a week that sounded an awful lot like mine. Check it out, especially if you're a parent of a school-aged child. Or if Reese's Peanut Butter Cups are your drug of choice.