1. Last summer Will lost his beloved Roar, a "lovey" lion he had cherished and adored since he was just a few months old. Will and I looked everywhere, multiple times, but Roar never turned up. Have you heard the saying, "nothing is truly lost until your mom can't find it"? Well, this mama couldn't find Roar and felt awful about it. And although Will tried to convince himself and then pretended he didn't miss Roar, I could tell that deep down the loss devastated him.

A few afternoons ago the kids asked if they could get out their sleeping bags and "play sleepover". I agreed, left them to their sleepover, and made a phone call for work. Midway through the 45-minute conversation the possibility of Will's sleeping bag as a "hiding spot" for Roar crossed my mind. The minute I hung up the phone I hurried to Will's room. He was playing in the sleeping bag, so my hunch seemed unlikely to be right, but I suggested Will check the foot of the sleeping bag for Roar anyway. "He's not in here, Mom," Will assured me as he pawed around down by his feet. And then, in what was one of the most beautiful moments I've witnessed as a mother, Will's face lit up as he pulled Roar out of the bottom of his sleeping bag.

Will and I sat wrapped in a hug on the floor of his bedroom, crying tears of both joy and relief. Roar came home, and I doubt Will will let him go anytime soon. 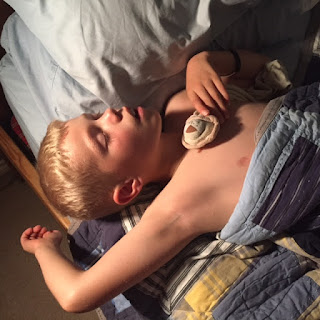 2. Three members of the Aggie basketball team - fresh off their fantastic run in the NCAA Tournament - and one of the TAMU yell leaders made an appearance at the kids' school. I have no idea if student athletes at other universities give back to the community the way these Aggies did, but either way, I feel lucky to live in place where such a strong connection exists. 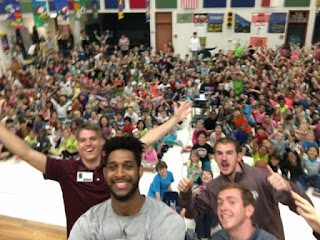 3. On a related note, at the end of last week Tom gave a talk at the University of Iowa, our alma mater. Prior to his visit, Tom jokingly asked those coordinating his visit (who are friends and colleagues, which is why it was alright for Tom to joke around with them) to set up a meeting with Fran McCaffrey, the Iowa men's basketball coach. When Tom arrived, the joke was on him. 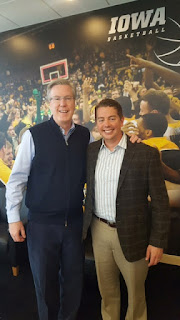 Tom and Fran probably high-fived a couple of times...

4.  On Sunday we celebrated Spicy McSpicerson's 7th birthday with donuts for breakfast, a picnic lunch at the park with friends, a playdate, Rosa's Mexican food for dinner, presents, chocolate cake and ice cream for dessert, and Garfield cartoons before we turned in. Thank you to everyone who called, texted, and/or mailed/brought over cards, presents, and balloons - Hallie appreciated every ounce of love sent her way.

5. Lily and Grandma have come from Wisconsin and Illinois for their annual cram-as-much-activity-into-a-weekend-in-Texas visit! Between Thursday afternoon and Monday morning we hope to attend Tom's department picnic and soccer tournament, attend Science Night and the book fair at the kids' elementary school, try Core Yoga at the gym, bake and decorate Hallie's birthday cake and cupcakes, have lunch with both Will and Hallie at school, pick up and package Hallie's birthday party favor cookies, attend Hallie's dance recital dress rehearsal, attend Will's soccer game, host Hallie's birthday party, and hopefully make a trek to the outlet mall. Oh, and dress the girls in matching outfits every minute of every day.