Do you fool family members and friends on April 1st? I love reading about or seeing pictures of other people's pranks, but I rarely follow through on any of my own...

1. As much as it pains me to write this, TUX has won our family's NCAA basketball tournament bracket competition. It looks like the five us will spend next Friday night eating tuna, rolling in the dirt, and playing with lizards...

All kidding aside, as of right now, Will and Hallie are within five points of one another at the top of the leader board. If North Carolina loses, Will wins the competition. If North Carolina wins, Hallie takes home the trophy for the first time ever.

I wrote previously about how I wanted Will to win because he cared the most and hadn't won before. Well, last Sunday morning he informed me that he won last year. So...GOOOOOOOOOO North Carolina!

2. We had a lovely Easter weekend. The kids didn't have school on Friday, so we slept in, worked out at the gym, went out for lunch, baked and decorated cupcakes, and wrapped up the day with drinks and music at an outdoor brewery with friends. On Saturday my friend and neighbor, Rebecca, and I hosted our first annual Easter egg hunt, I took pictures of Will and Hallie in a nearby bluebonnet patch, and the kids and I dyed hard-boiled eggs. (More on the egg hunt and bluebonnet pics to come!) On Sunday we celebrated Easter, intentionally clearing our schedules and slowing our pace so we could spend quality time together, just the four of us. 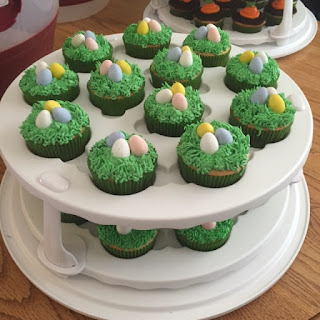 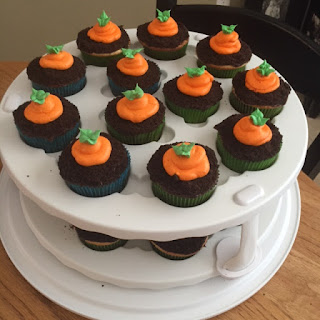 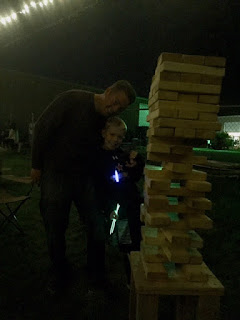 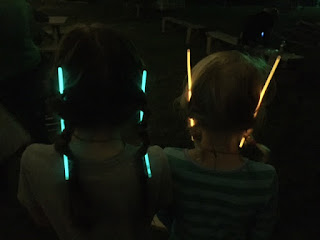 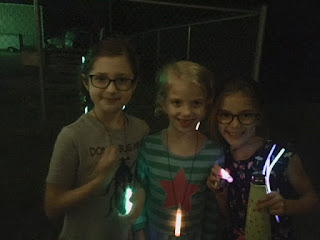 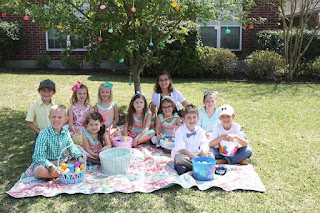 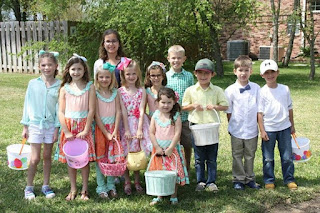 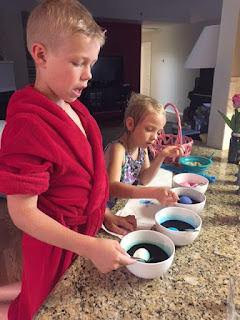 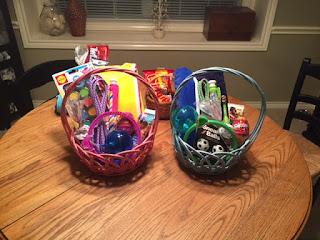 3. A short clip from "The Kitchen" popped up in my Facebook feed on Saturday afternoon, and even though I rarely watch the videos Facebook suggests for me, this time I clicked play. The host enthusiastically claimed that eggs could be "hard boiled" in the oven. I love egg salad and had plans to later make a batch with the eggs the kids had dyed, so I decided to give this woman's method a try. I put an egg in each space of a muffin tin, baked them for 30 minutes at 325 degrees, and then shocked them in a bowl of ice cold water. When I pulled the eggs out of the water 10 minutes later they were PERFECTLY "hard boiled".

Making hard boiled eggs on the stove with boiling water isn't all that difficult, but somehow this method seemed much easier and less messy. I'm sold!

4. On Easter, of all days, I discovered buds on my nectarine tree. Overjoyed didn't even come close to describing how I felt when I realized my beloved tree had survived my brown thumb to grow another season. 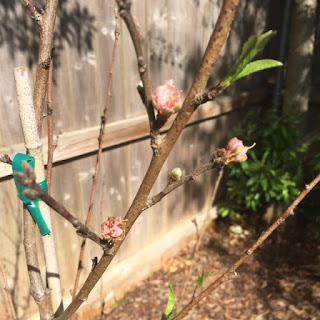 My lemon tree, on the other hand, does not seem to have followed in the nectarine tree's footsteps. I still have hope, but I have also prepared myself for the lemon tree's funeral.