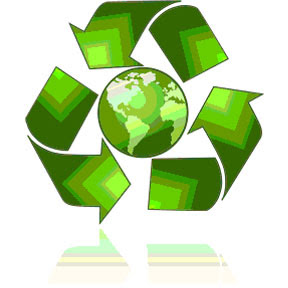 In the three Midwestern cities where I’ve lived for extended periods of time – Madison, Wisconsin; Iowa City, Iowa; and Ann Arbor, Michigan (I also lived in Cedar Rapids, Iowa for two years; Brant Lake, New York for one summer; and traveling the country for one summer) – everyone and everything was green.

And by green, I mean eco- and environmentally-friendly, though now that I think about it, all three cities are probably pretty green in color right now too, what with all the rain they’ve had this spring.

My family (as in my parents, sister, and me) has been recycling for as long as I can remember. My mom insisted on it, despite the fact that it didn’t used to be easy to recycle. We collected aluminum cans, as well as cardboard and paper, in large paper bags in the house, and when the paper bags were full we carried them out to the garage. When the garage was full of recyclables we loaded the bags into the trunk of the car and drove them across town to the recycling center. At the recycling center we sorted all of the cardboard and paper according to weight and distributed it to the correct dumpster. Then we emptied all of the aluminum cans into large garbage cans, waited in line to have them weighed, and waited in line again for our deposit money. (Usually my mom let my sister and me split the deposit money – all $0.45 of it.) Talk about a pain in the butt. But we did it anyway, at first because my mom said we had to, but eventually because we’d learned what recycling actually meant, and believed – as my mom did – that it was the right thing to do for our planet.

Over the years, recycling has become, in least in the three Midwestern cities I’ve called home, quite a bit easier. About a year before we left Michigan, Ann Arbor made the transition to single-stream recycling, which meant that nearly everything (all paper, all glass, all tin and aluminum, and all except #3 plastics) could be recycled and all recyclables could be combined in one large recycling can. On garbage day our recycling can was always full and our garbage can was never more than 1/3 full.

It was also extremely easy to recycle when we were out and about. The universities in these three cities make recycling a priority; there are recycling bins next to nearly every garbage can on campus, as well as in nearly every lecture hall, classroom, library, cafeteria, and office. There were also recycling bins at the mall, in city buildings, and next to the garbage cans at the park.

I was surprised and frustrated to discover that recycling doesn’t seem to be a top priority here in College Station. We can only recycle paper, clear and brown glass, cans, and #1 and #2 plastic, and everything has to be sorted and bagged separately. (At least the city picks up our recycling – I’ll give them that.) On garbage day, at least 50% of the garbage cans on my street are overflowing with trash AND RECYCLABLES, no doubt because recycling here is time consuming and people would rather just throw their recyclables in with their trash then take the time to sort and bag them every week. I’m considering a ninja-ish intervention in which I sneak out on garbage-day-eve and on the doors of houses that don’t recycle place notes that read “Did you know that cereal box you’re throwing away could be recycled?” I’m still working out the details – mainly those surrounding finding a sweet ninja costume – but will keep you updated on how this plan plays out.

In my husband’s office building at TAMU there is only one recycling bin. It’s a four story, fairly large building, which means that in order to recycle, most students, faculty, and staff have to trek to a different floor and end of the building to recycle. Do you think they do that? When they’re running late to class? When they’re swamped with work? Probably not. Tom often ends up bringing his recyclables home with him – which means carrying them from his office to his car a couple of blocks away – because it’s easier than taking them to the one recycling location in the building. I realize that setting up strong recycling programs at large universities is complicated and expensive, but I also feel like its money well spent. Money well-spent on making sure our planet is livable for our children and grandchildren.

I’m not a perfect recycler by any means. But I can say without a bit of reservation that, at least in my home and with my family, I’m doing the best I can and I’m teaching my kids to do the best they can as well. I’d like to do SOMETHING to start improve recycling throughout College Station though, but with the exception of my ninja plan, I’m not sure where to begin. Any suggestions?
Posted by Chasing Roots at 8:37 PM

Email ThisBlogThis!Share to TwitterShare to FacebookShare to Pinterest
Labels: Down South, Family, Green, Life, Up North