Back in January I wrote about the tradition of the 12th Man at Texas A&M University.

If you recall, after an injury-laden first half that left the TAMU football team close to forfeit, the 12th Man - E. King Gill - came down from the stands, dressed, and joined his team on the sidelines. Though Gill never went into the game, his spirit of readiness for service, desire to support, and enthusiasm helped kindle a flame of devotion among all TAMU students.

Ever since that game in 1922, the entire TAMU student body has been collectively considered the 12th Man, standing - at the ready to help their team - for the entirety of football games.

The tradition of the 12th Man is recognized on and off campus in a variety of ways, one of which is on TAMU fan jerseys, all of which bear the number 12 on the back. 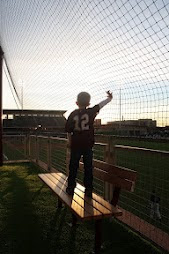 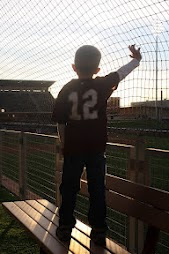 This jersey suits my boy.  He is always standing - ready to serve, eager to support, and enthusiastic about his life and the people in it. He may be little, but he will do big things.
Posted by Chasing Roots at 6:00 AM