...it keep parents off the streets."
~Yogi Berra

I love helping Will dress up in his adorable uniforms (if there's anything cuter than a little boy's butt in baseball pants I've not yet found it); taking him to practice; cheering him on from the stands; and watching him improve his skills, learn more about the game, become a member of a team, take pride in his personal and the team's successes, and learn to graciously accept defeat.

I've been very impressed with the organized sports available here in College Station. There have a been a few snafus along the way (like, you know, having to become a soccer coach on approximately 12 minutes notice), but overall we have had great experiences with soccer, basketball, and now baseball.

Baseball is a great sport for Will for a few reasons:

1. Baseballs are small, so he's considerably less afraid of them than he was of basketballs.

2. Baseball doesn't necessarily favor athletes who are tall or generally large. Will - once again the smallest child on his team - can hold his own against kids who are a year older, six inches taller, and 15 pounds heavier with no trouble at all.

3. Will seems to have fairly decent hand-eye coordination (a gift from Tom - there's a reason the only sports I was ever any good at were soccer and swimming) and upper body coordination, which makes swinging a bat and hitting a ball seem like second nature for him.

4. Will really LIKES baseball, which means he likes to watch it, ask questions about it, and practice on his own. This translates to him really understanding the game and what he's supposed to do when he's on the field more so than most five-year-olds. This was not the case when he played basketball.

5. Will has a couple of new baseball idols in Ms. Andrea's (Hallie's preschool teacher) sons, Zachary and Brandon. At 11-years-old they're both VERY good at baseball, so I took Will to one of their games for him to see what bigger kids' games looked like. Ever since that day (and ever since they high-fived Will after the first inning) he talks about Zachary and Brandon all the time: "Mom, do you think Brandon likes playing 3rd base? Mom, do you think Zachary has ever hit a home run?". As if I have the answers to these questions. I'm just going to give Will their phone number so he can start directing his questions to the source.

At the beginning of baseball season the league held an official, Olympic-like Opening Ceremonies on Olson Field at Blue Bell Park (where the Aggies play). Will loved every minute, from walking the field with his team, waving to the cheering crowd, and posing for pictures. 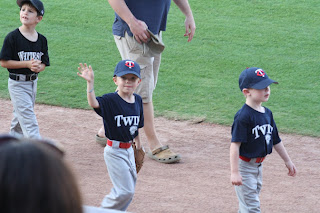 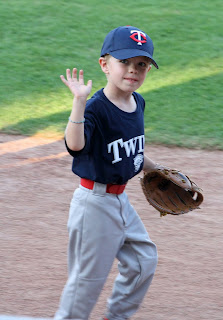 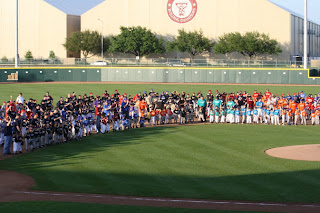 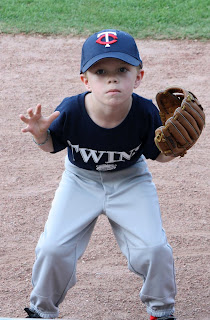 Aunt Sara and family were in town for the Opening Ceremonies, and perhaps Will's biggest fan that night was his cousin Lily. This is how she reacted when Will walked by and waved.
My heart is melting.

And then the season got underway - twice-a-week practices for three weeks, and now twice-a-week games for eight weeks. It's a lot to fit in at the same time as spring soccer, but I honestly love every minute of it and judging from these videos and photos, I think Will does too.

The first video is of Will hitting off the tee at his first practice, and the second is of him batting - no tee - in his first game.  (Kids are given three tries to hit the ball when a coach throws it to them, and if they miss three times they hit off the tee.)