One year ago, when we'd only lived in Texas and Tom had only worked as a professor at TAMU for a few months, our family attended Tom's department's (ISEN) spring picnic. Well, let me rephrase that... Tom attended the spring picnic, joined in a faculty vs. student basketball game, and in an attempt to impress his new coworkers and students, saved a going-out-of-bounds ball, slammed into a cement park bench, and broke his collarbone. (If you recall, 2011 was the year of the broken collarbone in the Ferris household.) The kids, my mom, and I attended the spring picnic just long enough for my mom and me to take one look at Tom and then put him in my car, bound for Urgent Care.

The whole ordeal - both the broken bone and Tom's ability to continue to perform at his job in the days and weeks following the accident really put Tom on the map in the ISEN Department at TAMU, if not as an A+ basketball player, than as a hard-working, dedicated team-player.

A couple of weeks ago the ISEN spring picnic rolled around again, and as one might expect, Tom was dreading the annual faculty vs. student basketball game. He wasn't about to let that damn bench (still there, no worse the wear from its run-in with Tom a year prior) get the best of him though, so he suited up and took the court with his fellow faculty members. 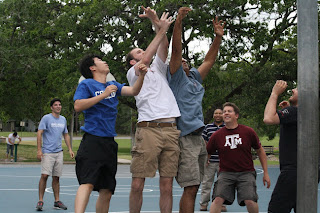 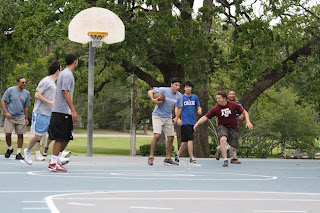 With basketball skills not quite on par with their intellectual skills, the faculty team lost their first game quickly. As they were replaced on the court by another student team I could see a look of relief wash over Tom's face...he'd survived. 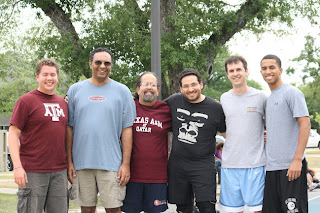 Luckily for Tom, Will had a baseball game that evening and he was able to duck out of the picnic before the faculty team was called back onto the basketball court, collarbone intact. At least for the time being...the 2013 ISEN picnic is only about 345 days away.
Posted by Chasing Roots at 6:00 AM