I heard this question quite a few times after I made public my decision to attend the University of Iowa in Iowa City, IA.

"Why would you move to Iowa?! There's absolutely NOTHING in Iowa except corn!"

No, Iowa is home to a heck of a lot more than corn. (Though the corn in Iowa IS amazing.) Museums, wineries, breweries, racetracks, amusement parks, casinos, theaters, college athletics - I was never bored during my five years in Iowa City and two years in Cedar Rapids.

"Why wouldn't you attend the University of Wisconsin? UW is a better school and is closer to home and will be less expensive because you're in-state and has better ice cream."

Yes, UW is closer to home. It's so close to home, in fact, that at 18 years old I felt like I'd already been a student at UW for years. I'd been to football games, basketball games, and music and theater performances. I'd hung out at the Union and on the Terrace, and shopped on State Street. When I was in elementary school I'd even gone to class with my mom. At age 10 I took two complete lectures' worth of notes in Bio Chemistry. I was super cool.

Yes, UW would have been less expensive. I'm sorry and thank you, Mom and Dad.

"Want to hear a joke? What the best thing to come out of Iowa? Interstate 80!"

I never planned on becoming a Hawkeye, in fact I always thought I'd become a Badger. Despite doing fairly well in school and always knowing as I was a child that I would eventually attend and graduate from college, when the time came to fill out applications and write essays I completely shut down. My poor mom...she signed me up for the SAT and ACT when I wouldn't do it myself. Every afternoon she handed me the college and university brochures that had arrived in the mail that day and begged asked me to look through them. She dragged me to at least four school visits/tours. She stood over me while I filled out my applications and then mailed them for me. I imagine those few months were very trying for her...

I applied to Iowa because it was a Big 10 school in a college town (which felt familiar to me, since UW is also a Big 10 school in a college town), and because it was close - but not too close - to home. And because the pictures in the brochure were pretty. And because my mom told me she was going to freak out if I didn't get my butt in gear and start taking the college application process seriously. After I applied but before I was accepted my mom and I visited the campus to attend an official campus tour and check out dorm living. I was anything but excited about the trip.

Our tour took place on a terribly cold day in January. There were at least six inches of snow on the ground, which troubled many parents and students on our tour. (Don't visit the Midwest in the winter if you can't handle snow, people.) My mom and I just took it in stride, however, layering our clothes and our winter wear in a way that allowed us to withstand at least a couple of hours outside. I think it's important - or at least interesting/funny - to note that I was wearing tapered mom jeans, a white turtleneck, a denim button-down shirt over the turtleneck, and a sweater that looked something like the photo below over the denim shirt. It was the 90's, people - I thought my layering was awesome. 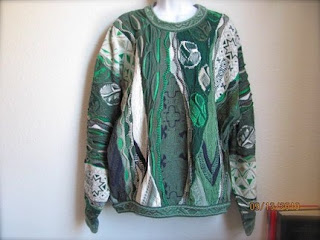 Despite the bitter cold, it was a beautiful day and I found myself starting to relax and even enjoy the tour as it went on. Toward the end of the tour our guide, whose name was Amanda, led us to the Old Capitol (Iowa City used to be the capital of Iowa) in the center of campus. From the steps of Old Capitol I could see out across more than half of campus and down to the river that peacefully divides Iowa City into East and West. As we stood on those cold, cement steps I just knew...knew that the University of Iowa was the school I was supposed to attend. From that day on I didn't apply to or visit any more schools; I simply waited for my acceptance letter from and sent in my commitment to Iowa. It was one of the best decisions I ever made.


The view from the Old Capitol steps, though this picture was taken in September
and not in January, when the barren trees allow for a view of the river. 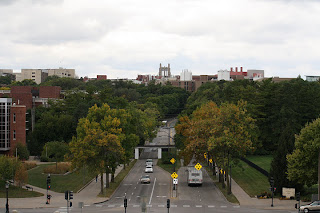 I found myself on those same steps many times throughout my five years in Iowa City.  Those cold, cement steps were always there for me - when I needed to think through complicated choices or have tough conversations with friends or just cry it out - and they never once led me astray.  So when people ask me, "why Iowa?!", I honestly answer, "the steps" and smile.
Posted by Chasing Roots at 6:00 AM