We're always on the lookout for free/cheap, family fun here in our "new" city. Note: at some point I promise to stop calling College Station our new home and just start calling it our home. When I read in the newspaper that a children's choir from Africa would be performing a free concert at a church in Bryan, we cleared our Friday night (who am I kidding - our Friday night was already clear) and made plans to attend.

We arrived 20 minutes before the concert was scheduled to begin and found the parking lot PACKED. When we finally made it inside the church we of course found it to be PACKED as well - as it turns out, the African Children's Choir had visited this church twice previously and therefore had a strong following with the church community - and we nearly left because we knew we couldn't stand in the back with Wiggly Willie and Hell-Raisin' Hallie for an entire concert. Just as we were about to do so, a kind man ushered us to the front of the church and sat us in the very first row, which had been reserved for families with children. I was really excited, as I figured the our kids would do much better if they could actually SEE the kids in the children's choir. Shows how little I know about my own children.

Two minutes into the concert Hallie decided she was starving. STARVING. Like IF-YOU-DO-NOT-FEED-ME-THIS-INSTANT-I-WILL-WASTE-AWAY-INTO-NOTHINGNESS starving, and she let everyone around her know it with crocodile tears and a dramatic collapse across Tom's lap. The snacks in my purse held out for approximately seven minutes, after which Hallie took to ripping the concert program into 1,714 pieces. Operation Program Destruction took another six or so minutes, at which point Tom removed her from the church. She then had the best night of her life playing the church nursery, and cried when we made her leave to go home.

Will quietly watched the concert the entire time Hallie acted like a crazy person, but once Tom removed Hallie, it was as if a switch flipped in Will and he realized that his time to "shine" (read: behave poorly and embarrass his mother) had come. Will started begging for snacks, asking to play Angry Birds or watch videos on my phone, and trying to lay down underneath the pews - all while we were sitting in the very front row and the cute little children from Africa were singing and dancing and drumming. Luckily Will understands and responds to my there-are-daggers-coming-out-of-my-eyes look, and we made it through the entire 75-minute concert without getting escorted out.

On to the concert...  The African Children's Choir "travels the world, acting as the ambassador for Africa's most vulnerable children.  Their goal is to raise awareness and show that despite the desolate circumstances they come from, they have beauty, dignity, hope, and unlimited potential". 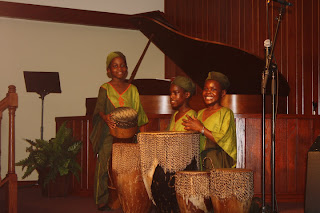 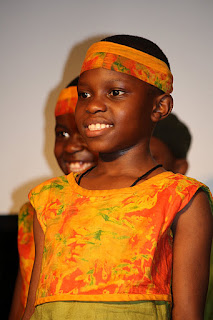 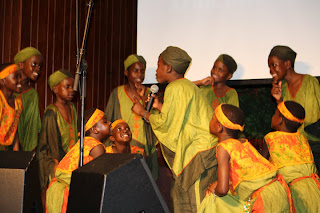 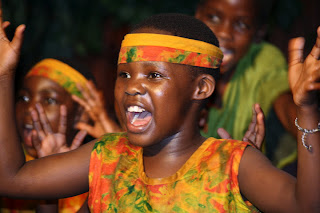 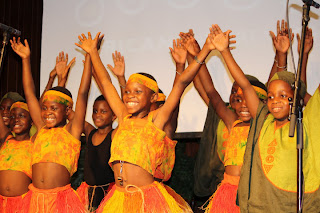 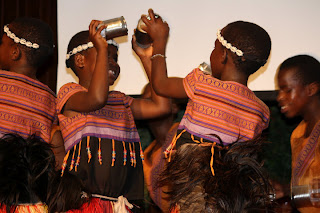 I hope, should the African Children's Choir return to the Bryan/College Station area, that I'll be able to see them in concert again.  I also hope that by then my children will have had a chance to brush up on their "concert etiquette".
Posted by Chasing Roots at 9:00 AM