Unfortunately Will was sick on Backwards Day. I felt particularly bad for him because he'd been sick on Pajama Day as well, so I let him wear his pajamas backwards and for the entire day (at home) to make up for having to miss both special attire days (at school). 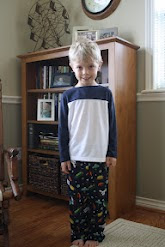 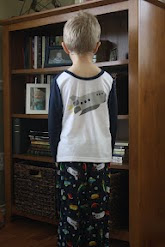 I learned about halfway through the day that Will had gone all-out with regard to wearing his clothes backwards... 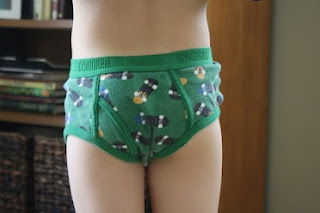 Hallie, on the other hand, was perfectly healthy on Backwards Day. I was a little worried about her agreeing to participate (she's a wee bit particular about her clothing), so I started hyping Backwards Day a week in advance. When the actual day rolled around she was completely psyched and wore both her shirt and skirt backwards. 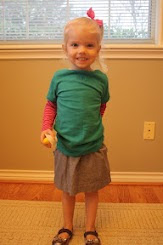 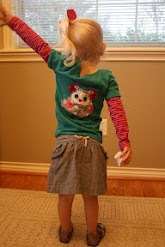 As it turns out, both of Hallie's teachers - Miss Hah-wee (Holly) and Miss Andwea (Andrea) - forgot about Backwards Day. Additionally, none of the other kids in Hallie's class wore their clothes backwards. So, when Tom dropped Hallie off that morning, Holly and Andrea took note of Hallie's outfit, looked at each other with quizzical looks, smiled sweetly at Tom, and told him how cute Hallie looked that day. Tom took their comments to mean they liked her backwards attire, when in reality, they were just being polite...they thought Tom had been responsible for getting Hallie dressed (a circumstance that our family avoids if at all possible) and had somehow missed the fact that her entire outfit was on backwards.

A little later that morning, when the class headed out into the hallway of the school, Holly and Andrea noticed that other children were also wearing their clothes backwards and realized that Tom had not in fact mis-dressed Hallie. They had a good laugh, and we all three had a good laugh when I picked Hallie up at the end of the school day.  I also filled them in on how they were probably right to have assumed Tom was responsible for the fashion faux pas...

When we lived in Michigan and I worked for the Red Cross, Tom was responsible for getting the kids up, dressed, fed, and out the door to "school" on the mornings I went in to the office. Of course I laid out the kids' clothes and shoes, selected hair bows/barrettes for Hallie, laid out appropriate outerwear, and made lunches the night before, but he was still responsible for putting it all together and dropping them off on time.

When I would arrive to pick the kids up Hallie usually looked a bit disheveled, especially in the hair department. I could tell Tom tried, but doing hair just isn't one of his many talents. But one day I arrived and found her hair in perfect pigtails. The following day I arrived and found her hair parted neatly on the side and a barrette holding her wild bangs out of her face. I was impressed. About three weeks went by before I finally mentioned something to the teachers about what a nice job Tom was doing with Hallie's hair - "he's really got the hang of it now, doesn't he?" I bragged. It was then the teachers finally confessed that Tom had just started bringing Hallie to school hair unbrushed and with hair supplies in hand. He'd pass Hallie and the hair supplies over, and they would brush and style her hair once he left for work.

TWICE I was heading home with the kids when I realized Hallie was wearing only one shoe. We went back to her classroom, where I asked the teachers if they'd found the other shoe or if perhaps she'd taken it off and lost it during the day. "Oh, Erin", they replied. "She only had one shoe on when Tom dropped her off this morning."

So it wasn't too far off for Ms. Holly and Ms. Andrea to assume that Tom had put Hallie's clothes on backwards. The difference now is that, when you compare Tom and Hallie, Hallie is the clear fashion expert. There is absolutely no way she'd let them leave the house in the morning with only one shoe on, her hair unbrushed, or her clothes on backwards - unless of course that's what was supposed to happen that day.
Posted by Chasing Roots at 9:00 AM