From Soccer Mom to Soccer Coach

Considering Will's only five years old, his soccer playing "career" has been an eventful one. 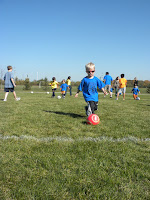 Will played his first season in the fall of 2010, while still in Michigan, on a three-year-old team. He had - to put it gently - a difficult time adjusting. (Read all about that first season here and here.  It was not pretty...Will threw the most epic tantrum of his entire life throughout the entirety of his first practice/game.)

I think it was the right decision to start Will on a sports team when he was three though, because he was able to sort through a lot of his sports team-related issues and work his early-four-year-old meltdowns out of his system that year. When we arrived in Texas and Will switched schools, joined a new soccer team, and was frequently dropped off at new gym and church childcare centers, he adjusted remarkably well, all things considered.

My rockstar dad started coaching my soccer team when I was six years old, and continued as my coach until I was 13. I learned a great deal about coaching from him, enough so that when I was in high school and my little sister was in middle school I was able to step in and coach her team - of which my dad was the coach - whenever my dad couldn't make it to one of her games because of a work conflict or game of his own.

I figured I'd wait until the kids were a little older to start coaching (like after they'd learned the basics of team sports and how to listen to a coach), and in the meantime I'd enjoy steaming hot cups of coffee while sitting on the sidelines in my lawn chair and let someone else keep my children interested, focused, and from melting down.

Last fall Will's soccer coach was a TAMU college student named *Marie. Marie had supposedly coached young children in the past, and while this appeared to be the case as far as the actual child-interaction piece of coaching was concerned, when it came to working with parents - a big part of coaching children - Marie was pretty clueless. She wasn't great at returning emails and phone calls, and for nearly three weeks in the middle of the season she basically dropped off the face of the earth and left us parents to fend for ourselves. During this three week stretch, myself and two other parents - a couple named Suzanne and Paul (Paul is actually the Strength & Conditioning Coach for the TAMU Women's Soccer Team) - stepped in to fill the gap. Paul took the lead, seeing as he's a collegiate soccer coach and all, but Suzanne and I filled in whenever he was traveling with the TAMU women.

Fast forward to the week before this spring season was scheduled to begin. We learned Marie would be coaching the team once again when she emailed us a few days before the first game. Her email indicated that while she didn't yet know the time of our game that Saturday, she'd be in touch as soon as the schedule was released. We waited, and waited, and waited...and never heard from Marie. At 8pm on Friday night, Suzanne finally tracked down our game time - by contacting another coach who looked up our game time for us - and emailed the rest of us parents.

On Saturday morning I arrived at the field dressed in my "drinking a hot cup of coffee while sitting on the sidelines in my lawn chair" clothes. When I approached Suzanne I could see from the look on her face that she had "news". As it turned out, Marie had quit at some point between her Wednesday night email and that Saturday morning...and hadn't told anyone. And the new head coaches, as of that morning? Paul, Suzanne, and Yours Truly. Paul was out of town that day, so Suzanne wrangled the kids on the sideline and I coached on the field. I had no whistle and no watch, so Tom kept time on his phone from the sideline while simultaneously entertaining Hallie with videos on my phone. Behind the scenes we adults were a bit haphazard, but on the field the kids were rockstars - they won the game, convincingly. (Even though we're not supposed to keep score. Which drives me crazy.)

In between keeping time on his phone, Tom took a few phone photos and videos.  They serve no other purpose than to remind me that I should never, ever wear those jeans again.


And here are a couple of fun videos - that's Will scoring in the first one!


So now I'm a youth soccer coach. And you know what? I like it. Especially right now, while most of the kids on Will's team are returning players who have worked together before and have a decent idea about what to do on the field (at least more so than the players on the two teams we've played so far). I also really like coaching with Paul and Suzanne - it's nice that we can back each other up and we each bring something different to the table in terms of our skills and abilities.

I can't say for certain how long I'll continue coaching, but I can tell you for certain that I'll be checking out of the game - and checking in on the sidelines as a spectator - the minute parents start yelling at coaches. I watched my dad, and then my high school and club team coaches, deal with a lot of awful parents and I know I couldn't handle that kind of face-to-face conflict and ridicule. (I played very competitive soccer in late middle and high school, and at that level, when both kids and parents have a lot riding on playing time, personal statistics, and tallies in the win column, some people get downright nasty. I've seen parents punch coaches and referees in the face, yell at kids {their own and others}, and get escorted out of stadiums by police officers. It's not pretty.) I often let my emotions get the best of me when faced with conflict, and no one - especially Will - want to see Coach Erin crying on the sideline. :)

So here's to a fun-filled season of U5 Bumble Dog soccer. I'm going to enjoy every minute my son lets me lead his team, and I'll worry about drinking a hot cup of coffee while sitting on the sidelines in my lawn chair in a few years.

*Marie is obviously not the coach's real name.
Posted by Chasing Roots at 6:00 AM