We were back at the allergist last Friday morning, assessing our progress after six months of participating in the cooked milk muffin trial. And I can use the words “we” and “our” because while Will actually ate the muffins, the trial impacted the day-to-day lives of everyone in our family.

From baking the muffins every few days (me), to encouraging/bribing/pleading with Will to eat his muffin every day (Tom and me), to listening to Will’s first complaints and then cries about how awful the muffins tasted (Hallie, Tom, and me), this eating extravaganza was no picnic.

For the record, the muffins tasted like cupcakes, but the fact that Will HAD to eat one every day made them less-than-desirable to his taste buds.

Our allergist was incredibly impressed that we only missed two days – Will’s birthday and one day when he was sick with a stomach bug – throughout the entire six months…apparently it’s pretty common for participants to skip muffins on a regular basis. (I’m not sure what part of “eat one muffin every day for six months” wouldn’t be clear, but that’s just me.)

The initial skin test showed a dramatic decrease in Will’s dairy allergy, and I beamed when the allergist attributed the change to us “doing the work”.

We moved on to the milk challenge, starting with a full teaspoon instead of with a ¼ teaspoon like we did last time. The challenge process is slow and tedious and a bit stressful – as I’ve mentioned previously, there’s nothing quite like watching your child eat/drink something dangerous to them and then just waiting to see what happens, Epi-pen at the ready – but regardless of the results (positive or negative), at least challenges provide information.

Will passed the teaspoon, or “level 1” (think Super Mario Bros. levels), as he called it, and only gagged once. While he likes the taste of chocolate milk, Will doesn’t like the way milk feels on the lining of his throat – this is pretty common with people who first drink milk as a child or adult instead of as an infant or toddler – and gags after he’s had a drink.

Will also passed the tablespoon and the ounce by “chasing” his milk with fruit punch. A lot of fruit punch. Three boxes of fruit punch. We went to the bathroom quite a few times during the four and a half hours we were in the allergist’s office.

Finally we moved on to the open, which meant Will drank as much milk as he wanted. It was at this point, when we’d actually almost made it to the end without a positive (positive = bad) reaction, that Will and I tentatively started to talk about cheeseburgers.

When I brought up the possibility of him getting to have a cheeseburger, he looked at me sadly and said, “Mama, I can’t have cheeseburgers. I’m allergic to dairy.”

Oh. I’m sorry. I didn’t realize you were allergic to dairy. I wonder why we’ve been going to allergists for years and why we’ve been eating muffins for months and why we’re sitting in the allergist’s office right now shoving measureable and increasing quantities of milk down your throat? It’s like he’s never listened to anything I’ve ever said. (Insert apology for never listening to my mom here.)

With a chuckle I replied, “I know, Will, that’s why we’re here. If you pass this final level, it means you’re no longer allergic to dairy. It means the muffins worked.”

The switch flipped in his super huge brain and he excitedly told me that he was going to try his absolute hardest to pass this level so he could have a cheeseburger.

We all have dreams for our children – happiness, health, success, love. I of course want these things for my children as well, but that day, as I sat there in the allergist’s office, my only dream was for Will to get to eat a cheeseburger.

Will passed the open, and was declared “cured” of his dairy allergy. The news literally took my breath away, and as I thought back on the five and a half years that we have dealt with this particular allergy, it was all I could do not to break down in tears right there in the allergist’s office.

We’ve spent the last few days exposing Will to as many dairy products as possible. He enjoyed his cheeseburger and cheddar goldfish crackers, but was less-than-enthusiastic about macaroni and cheese, slices of Swiss and cheddar cheese, and ice cream. (Who doesn’t like macaroni and cheese and ice cream?! ) Pizza, yogurt, and bagels with cream cheese are next. I’ll probably gain a few pounds in the next week… 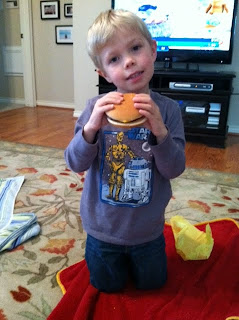 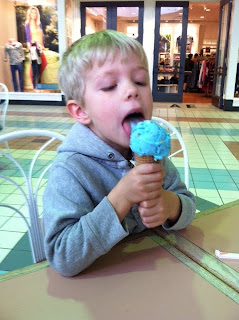 I would usually consider a post like this one more appropriate for our family blog. I’ve decided to post it here, however, because if we had not moved to Texas I doubt I would have ever been able to write this post in the first place.

Will is a testament to the fact that the team at our College Station allergy clinic cares about more than simply diagnosing allergies and sending patients out the door with prescriptions for Epi-pens. They care about their patients’ – and their patients’ families’ – quality of life, and their mission is to improve it. Congratulations, Paull Allergy and Asthma Clinic…Mission Accomplished.

Posted by Chasing Roots at 9:00 AM