Most of the teachers at Will and Hallie's school spend January and February teaching their children about winter. The kids play dress-up in bulky coats, snow pants, boots, hats, scarves, and mittens (yes, winter wear is basically dress-up clothing here); color and paint pictures of snowmen; and learn about animals who live in cold climates (Hallie's teacher: "Hallie, where do polar bears live? Hallie: "IN A BARN!") and/or hibernate during the winter.

Will's class, along with the other four-year-old classes, received a special winter treat at the end of January...they got to go ice skating.

But not on ice, and not with skates.

The teachers set up a HUGE tarp, duct taped the edges of the tarp to the floor, and then covered the tarp with shaving cream. The kids rolled up their pant legs and skated in a circle - just like they would have done on an actual ice rink - but were allowed to periodically skate into the middle to do "tricks".


Midway into a wipeout. 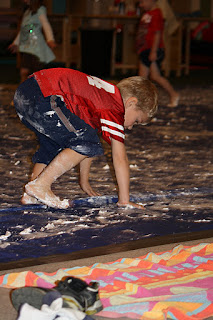 "Skating" in a circle. 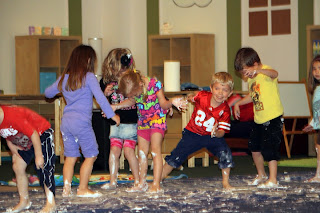 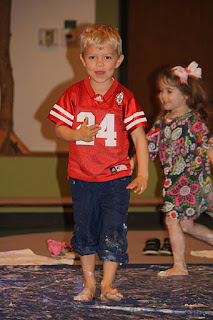 Cleaning up.  (Those kids wiped that tarp until it was
cleaner than it had every been.  I was impressed.) 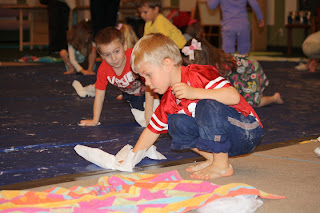 The kids had an absolute blast, and Hallie and I had a pretty good time watching them as well.  I'm a little worried, however, that Will might think that what they did at school that afternoon was ACTUALLY ice skating...I may need to call on Grandpa Paul (my dad, who happens to be a pretty good ice skater and hockey player, and who taught both of his daughters to play hockey) to set our little boy straight the next time we head north.
Posted by Chasing Roots at 9:00 AM