Tom and I met at the University of Iowa, on the first day of his freshman year, at choir practice. Despite the fact that I'd already been a member of the Newman Singers - a contemporary liturgical and concert choir based out of the Newman Catholic Student Center on campus - for a little over a year when Tom joined and I was two years ahead of him in school, we became fast friends as a result of this shared musical experience.

While the Newman Singers led worship and performed regularly at the Newman Center in Iowa City, the group also traveled the country doing the same during winter, spring, and summer breaks. Throughout my four years as a Newman Singer I estimate that we toured the Midwest 25 times; toured the country seven times, visiting 29 of the 50 states; recorded music for multiple CDs; and participated in two photo/publicity shoots.

One of these photo shoots resulted in this poster:


You may not immediately recognize me (upper right and lower left, wearing a
black sleeveless dress) because there is something terribly wrong with both the
color and style of my hair. I take responsibility for the blinding, brassy blond,
but a professional hair dresser at the photo shoot is responsible for the hideous style. 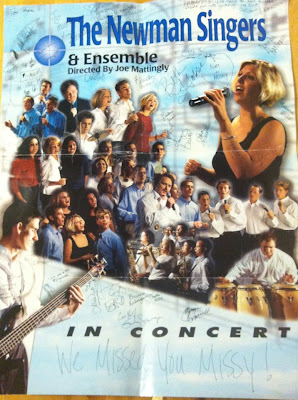 As my friend Dave wrote on Facebook when this picture was posted a couple of weeks ago, "This reminds me of how tiresome it was being a rockstar. So many photo shoots, so many autographs, so much paparazzi. Wasn't this the cover of US Weekly?"

In all seriousness, we were never actually famous. We were, however, among the who's who in the Catholic Music Circle, and were treated very well wherever we traveled. We posed for photos with families, signed autographs for little kids, and played a couple of gigs in impressive locations, like The Luxor Hotel in Las Vegas.

Both Tom and I miss music/singing/performing quite a bit. Since our Newman Singer days, we - along with our musically-talented friends, siblings, and parents - have coordinated the music for weddings of friends and family, and we were both members of the music worship team at our church in Ann Arbor. (I also perform Disney, Raffi, and Glee numbers - complete with dancing when appropriate - for my children. When they'll tolerate me.)

But while weddings and church services and impromptu kitchen showcases are rewarding and special, they're not the same as actual performances on stages with audiences that have come solely to see you make music. I know I'll never become a professional singer (though when my sis-in-law does, I fully expect she'll let me sing back-up for her at least once), and I'm completely alright with that - as Dave said, it was so tiresome being a rockstar.

I also know, however, that I'll always remember and appreciate and hang on to - in the form of a 10-year-old poster - my 15 minutes of fame.
Posted by Chasing Roots at 9:00 AM

Email ThisBlogThis!Share to TwitterShare to FacebookShare to Pinterest
Labels: Life