When we first decided to move to Texas we had every intention of selling our house in Michigan lickity-split, traveling to College Station before the move to purchase a house, and then moving directly into our already-owned, permanent residence when we arrived in College Station in December/January.

But selling our house in Michigan, the state with the worst economy in the country right now, was easier said than done. Despite the blood, sweat, and tears we put into the house and the nearly pristine final product (I’m not just saying that because I loved the house – nearly every realtor who came through provided us with that feedback), the sour economy plus the split-level floor plan kept our house on the market from mid-April through mid-December.

Since we weren’t prepared to own two houses – sounds like fun, doesn’t it?! – we decided to rent for a few months. I hated this idea, mostly because the thought of moving twice made me want to stick a pen in my eye, but also because after owning a home, “regressing” to renting (no painting or hanging pictures on the walls, having to ask permission to tighten a screw on the leaky sink, paying ridiculously high rent but also having to pay for “extras” like air filters, lawn maintenance, lawn watering, etc.) felt like a slap in the face. To add insult to injury, the laws in Texas STRONGLY favor landlords over tenants, which meant we nearly had to sign our lives away to finalize our seven-month rental contract. I’m still a little unclear about whether or not we’ll be allowed to take Hallie with us when we move from the rental next month.

After about six weeks of renting we knew we’d be getting the heck out of dodge the minute our contract expired. Hallie and I started neighborhood shopping (taking into account school districts and walking distance to schools, parks, swimming pools, shopping, and restaurants) while Will was at preschool, and after I’d narrowed down the neighborhoods, Hallie and I started house shopping. I looked at close to 100 houses online, walked through six, and picked one. Tom came to see the one I picked and loved it, and we made an offer that afternoon. (Coincidentally, that’s how Tom and I shop for nearly everything – I do the research, I visit the stores, I narrow to a few choices, and I pick the one I think would be best. Tom confirms that yes, he likes the one I picked, and yes, he likes the price, and then we buy it. Except for with electronics, that is – then the responsibilities are reversed.)

Let’s start with basements. Did you know there are actually people in Texas (most likely people who have not lived outside of Texas) who don’t know what basements are?! I don’t mean that condescendingly – it’s just shocking to me that someone could have not heard of a part of a house I’ve lived with my entire life. Because the soil in our region of Texas is primarily clay (which shrinks when dry and expands when wet, creating tremendous pressure on buried structures like basement walls and floors), basements are expensive and potentially dangerous. I was VERY disappointed to learn this, as #1 on my things-I-want-in-my-new-house-when-we-move list was BASEMENT.

Moving on to second stories. The house I grew up in has four livable stories, so I was again surprised to learn that most houses here are built on a single story – because of the extreme heat (and because heat rises), second stories are VERY expensive to cool. Can you guess what was #2 on my things-I-want-in-my-new-house-when-we-move list?

I also learned that while a pool would be nice to have on days like today (record high temperature of 105 degrees), I’m not willing to take on the maintenance or the liability.

And lastly, I learned that mowing thick, St. Augustine grass growing in clay soil is as difficult, if not more so, than say pushing a football tackling sled.

I’ll leave you with a few in-progress pictures of our house. We’ve owned it for about three weeks now, and though we’ve already put A LOT of hours of work into both the house and the move, we still have a little ways to go. 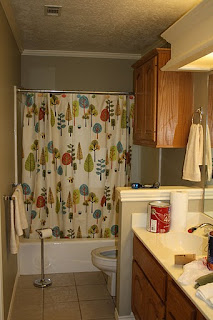 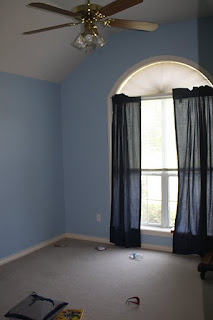 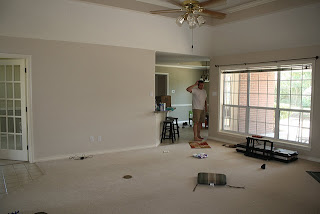 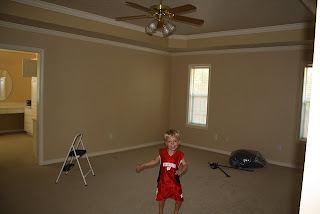 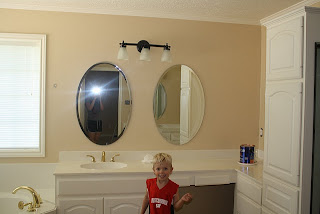 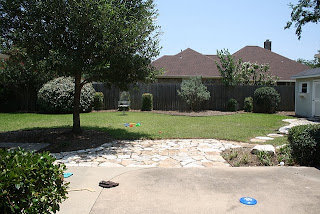 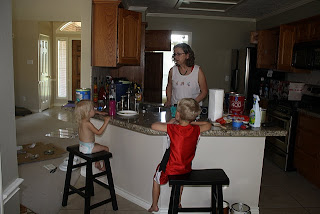 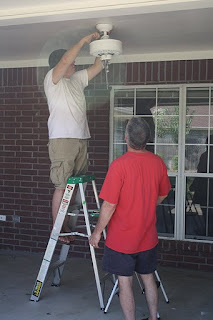