For all the sports I love, there are a few I can’t stand.

I’ve never liked watching ice hockey. My dislike for watching the sport on television has no basis and is odd, considering I enjoyed playing as a child (my dad, sister, and I loved playing – with miniature hockey sticks and in pink pompom-adorned white figure skates) and I grew up in one of two regions of the country that produce incredible hockey talent. While my high school (2,000+ students) football team was TERRIBLE, our ice hockey team qualified for the State Tournament nearly every year and we were released from school to attend tournament games. In Wisconsin, ice hockey is a big deal.

I’ve also never enjoyed watching professional basketball. But unlike with ice hockey, my dislike for professional basketball has plenty of basis: SO many of the players are jerks (I root against Kobe and the Lakers, regardless of who they’re playing), the season drags on and on and on, and I have this weird issue with all those big men on such a little court. I just don’t think the game is as exciting (compared to college basketball, or peewee basketball, for that matter) when the players can basically reach up and touch the rim or run from one baseline to the other in six or seven steps.

So now that you know how I feel about professional basketball, I’m sure you can imagine my lack-of-enthusiasm with regard to the Dallas Mavericks playoff qualification. I wasn’t about to miss episodes of The Event, Grey’s Anatomy, or Chelsea Lately to watch the big Mavs play against other big basketball players on little courts around the country.

But then the Mavs started winning. Against Kobe. And suddenly I was hooked. Not so much on professional basketball in general – I’m still really troubled by the big-men-on-a-little-court thing – but on the Mavericks. On a team made of up “good guys”. On a team without a traditional superstar (think LaBron), a pompous a$% (think Kobe), or a cocky, foul-mouthed coach (think Bobby Knight).

I have always chosen and continue to choose my sports team affiliations with three factors in mind:
- Where I’ve lived (Wisconsin Badgers, Michigan Wolverines, Nebraska Cornhuskers, Green Bay Packers, Detroit Tigers)
- Where I’ve attended school (Iowa Hawkeyes)
- The type of people the players and coaches are OFF the field

The first two factors help me choose teams to root FOR, and the third factor helps me choose teams to root AGAINST. For example, in addition to rooting against Kobe and the Lakers, I also root against the Yankees, Ohio State, Warren Sapp, Terrell Owens, and sadly, Brett Favre, because I don’t support what they (the teams) collectively stand for (or don’t take a stand against, for that matter) or how they (the individuals) behave off the field. My kids love sports, so I’m trying to direct them toward athletes who are positive role models.

I stumbled upon this article the night before game five of the NBA National Championship Series, and after reading Rick Reilly’s take on why we should all “Pull for Big D”, I was fully on board. The Mavericks represent what sports – even professional sports, where the players are paid more money to shoot a single basket than I’ll probably make in a lifetime working for nonprofit organizations – should be about: commitment, hard work, and a love of the game.

Congratulations, Dallas Mavericks, on your NBA National Championship. This time the good guys came out on top. 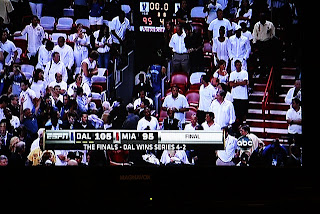 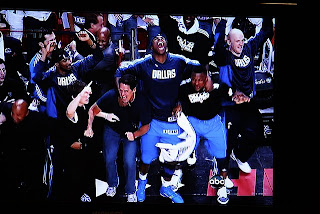 Oh, and you gotta love the guy wearing the cowboy hat at the trophy presentation. 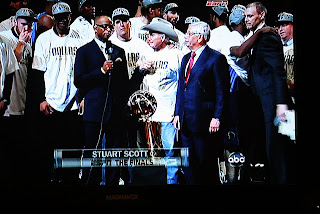 Posted by Chasing Roots at 6:09 PM

Email ThisBlogThis!Share to TwitterShare to FacebookShare to Pinterest
Labels: Down South, Family, Up North