Baseball...Has Been Very, Very Good to Me

Growing up I hated baseball. Watching it on television, watching it live, playing it. I suppose these feelings stemmed from a few negative childhood experiences (twice I nearly knocked people – my dad and my cousin – out when my wildly inaccurate throws hit them in the head, and I was the worst player on my team the one summer I played co-ed baseball), and since my parents and friends weren’t really interested in baseball there was no reason for me to change my opinion of the sport. Tom, on the other hand, loved baseball and was very good at it. Still is, actually – what a stud.

When Tom and I moved to Michigan he convinced me to start watching Detroit Tigers games with him, and before I knew it, we both became Tigers fans (despite the fact that they were pretty bad for nearly all of the six years we called Ann Arbor home). We watched games on television, bought t-shirts and hats for all four of us, and even drove to Detroit for quite a few games. I still don’t like to play baseball, because I’m TERRIBLE – I have the hand-eye coordination of a drunken grizzly bear (Tom’s analogy) – and I’m afraid of the ball, but I’ve become a huge fan of watching the game on television and in person.

We’d heard good things about the TAMU men’s baseball games, and since everyone in our family now enjoys the sport (or at least the food and the singing and the mascots), we decided to check out one of their preseason games (you know, before the regular season started and the rowdy college students decide it might be fun to see if one of my kids would bounce as easily through the student section as a beach ball would). The crowd was, at least based on my experience, HUGE for a preseason college baseball game – it seems the team has a lot of regular community fans, and hundreds of college students attend the games as well. We arrived in time to snag great seats in the general admission section and stock up on hot dogs, popcorn, and the sweetest pink lemonade I’ve ever tasted (not sweet in a good way, but sweet in a heavens-no-my-teeth-are-rotting-right-here-in-my-mouth kind of way), the sugar content of which kept the kids up late enough that we made it through six whole innings.

Cheering on the Aggies to victory. 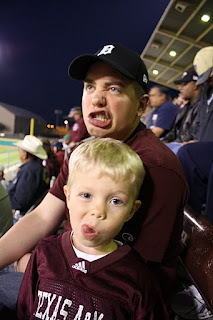 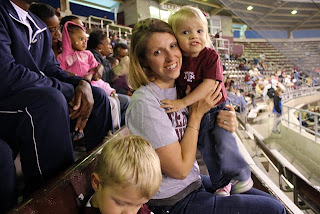 If you follow college baseball you’re probably already aware that the TAMU baseball team qualified for the College World Series, played every late spring/early summer in Omaha, Nebraska. We didn’t make it to any more Aggie preseason or regular season games, but thanks to ESPN and ESPN 2 (as well as one restaurant, one bar, and DVR) we were able to watch a few of their qualifying and World Series games.

Unfortunately TAMU lost its first and only two World Series games and was eliminated early on in the tournament. But the fact that the team made it as far as they did – they were the only unranked team in the tournament – was a big deal, to us as new TAMU fans, and to the TAMU and College Station communities. Next year, when the team makes it to the tournament again (fingers crossed!), we’ll pack up the family and head north to Omaha, which is coincidentally less than an hour from where Tom’s parents live in Lincoln, to watch the Aggies bring home the trophy. (Is it a trophy? I have no idea.)

It’s been a good few months for our “local” teams: National Champion TAMU Women’s Basketball, NBA Champion Dallas Mavericks, and World Series-qualifying TAMU Men’s Baseball. Not a bad year to be a Texas sports fan!
Posted by Chasing Roots at 8:20 AM