The last few months have been a whirlwind; here are a few highlights:

In December we made the move from Ann Arbor to College Station.

In January Tom started his new job at TAMU.

In March I became an official resident of Texas.

And today, after five months of renting (ugh), we became homeowners for the second time.

The house has been vacant for nearly a year, so it needs a little TLC both inside and out. The lease on our rental runs through the end of July though, so we have a few weeks during which we can work on the new house while still living in the rental. Starting tomorrow we’ll be, among other things, painting walls, ripping up carpet and replacing flooring, lining up folks to service the air conditioner (the most important appliance for a house in Texas) and fix a couple of electrical problems, replacing a leaky shower surround, and landscaping the heck out of the yard. Oh, and shopping for new throw pillows, my favorite home accessory.

I don’t love home projects (I love the finished product, but not the tedious steps required to get there), but I’m looking forward to putting in a little work and turning this house into our next home. 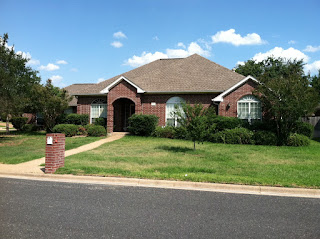 Posted by Chasing Roots at 3:41 PM