It was bound to happen sooner or later, though I’d hoped for later. Much, much later.

Last weekend, just four months after moving to Texas, a lizard found his way into my house.

I’m terrified of more animals than I’d like to admit, but because I’m going for honesty in blogging here, I feel compelled to share with you my embarrassingly long list: snakes, spiders, worms, slugs, centipedes, frogs, toads, lizards, fish, mice, rats, bats, squirrels (ground and flying), birds, ducks, and opossums scare the crap out of me. We’re talking crying, hyperventilating, cowering in the corner. It’s not pretty, and I’m not proud of it.

Last spring Tom and I came down to start looking at houses, and while in town we had dinner with two faculty members who had lived in College Station for a few years but were not native Texans. As we enjoyed the main course, one of our dinner companions informed me that I’d need to learn how to kill. A snake. With a hoe. Just thinking about it made/makes my skin crawl. I politely informed her that I would do no such thing, and then pleaded with Tom – using only my eyes and telepathy super powers – to reconsider taking the TAMU job.

So I knew ahead of time that there were snakes and lizards and fire ants here. And until today, my exposure to them had been minimal – just a couple of fire ant bites on my ankle and a lizard on the outside of the house.

I nearly had a panic attack just taking this picture from many feet away with my zoom lens. 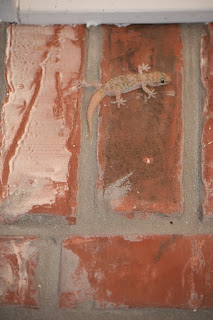 Last Saturday night we were out until a little after the kids’ bedtime, and by the time we arrived home they were both exhausted and on the verge of losing it. The plan was for Tom to run out and grab our take-out food for dinner while I bathed the kids and put them to bed; then we’d “meet up” for dinner and a movie. Unfortunately the kids completely fell apart when I put them in the bath, and both cried for 20 minutes straight while I washed them, dressed them in their pajamas, brushed their teeth, etc. When they were FINALLY in bed I breathed a sigh of relief and staggered out into the living room, ready to drop. I noticed as I walked past the front door that the outside light wasn’t on, and thought turning it on would be helpful for Tom who’d be coming home in the dark. As I reached out to flip the switch I saw him. Right there, on the wall, between the light switch and the door at eye level. The noise that came out of my mouth was something between a scream, a yelp, and a gasp, and was loud enough to lure Will from his bed to the bedroom door. I stumbled backward and fell/jumped into the chair in the living room (because it’s safer to have your feet off the ground in situations like this, just in case the wild animals attack), and called Tom on his cell phone. The conversation sounded something like this:

Erin: “COME HOME NOW! ONE OF THOSE ANIMALS IS INSIDE OUR HOUSE!” (I couldn’t remember that lizards were called lizards in my panicked state.)
Will: (from the door of his bedroom) “What’s going on out there? Who are you talking to?”
Erin: “STAY IN YOUR ROOM, WILL!"
Tom: (from the parking lot of the restaurant) “Do you want me to leave the food?”
Erin: “YES! LEAVE THE FOOD!”
Hallie: (from her crib) “Sutter! Sutter!” (Translation: Someone bring me my pacifier before I really start screaming.)
Erin: “I’M COMING HALLIE!”
Will: (from the door of his bedroom) “Mama! Who are you talking to?!”
Erin: “TO DADDY! STAY IN YOUR ROOM!"
Tom: “Ok, I’ll be home in a minute.”
Erin: “PLEASE HURRY!”

When Tom arrived home an hour (or maybe it was just a couple of minutes – I can’t be sure) later I was curled up in the living room chair with one eye on the lizard. (As much as it made me sick to my stomach to look at him, it was important for me to know his exact whereabouts. Knowing he was in the house but not knowing exactly where would have been WAY worse than knowing he was on the wall.) I hadn’t put Will back to bed or gotten Hallie her sucker so both kids were crying. It was a mess.

That speedy little lizard darted away from Tom on his first attempt at capture, which prompted another scream/yelp/gasp from me. Tom kindly instructed me to leave the room, so I did, and I hid in the shower until the whole ordeal was over with. Oh, and Tom asked me to share that the lizard was not harmed during Operation Catch and Release, and is now back in his natural habitat. (Natural habitat = outside my front door, where he watches, and waits.)

So we survived – just barely – our first up-close-and-personal encounter with a lizard. It pains me to acknowledge, however, that today’s encounter surely won’t be my last – those little critters have my number.
Posted by Chasing Roots at 2:19 PM