When Tom and I moved to Michigan we had every intention of taking full advantage of all – parks, campgrounds, historic landmarks, big cities, small towns, the Great Lakes, the coastal beaches and sand dunes – the state has to offer. But Tom was busy working. And I was busy working. And we didn’t have much money. And we were working on our house. And then we had a baby. And then we had another baby. And before we knew it, the time had come for us to leave Michigan, and we did so with only a few trips to Detroit and a drive through the Upper Peninsula under our belts. We’ve decided not to let this happen here in Texas, so while we haven’t seen much outside of Bryan and College Station yet, WE WILL. And we’ll do our very best to take advantage of what our city has to offer as well. And what does our city have to offer, you ask? The rodeo.

Our trip to the rodeo coincided nicely with Rodeo Week and Cowboy Day at Will’s preschool, so Will was, thanks to the real-life cowboys who demonstrated their roping skills for the kids, pretty pumped to see more cowboys in action. Hallie was also excited, but mainly because she really likes “ho-sees” and “MOOOOOOOOOO cows” and not because she had any idea what a cowboy or a rodeo actually is. Oh, and Hallie throws her support behind any event to which one should wear boots. 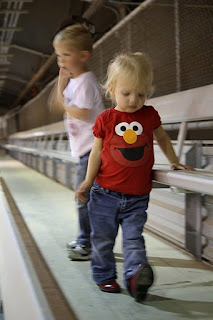 The rodeo announcer – who seemed to be part emcee and part commentator – was extremely knowledgeable about all of the rodeo events and competitors but was only moderately entertaining. I would have given him a C+ for his “performance”, except that he was on horseback the entire time; in my book, doing anything other than clinging tightly to the reins and praying for dear life while atop a horse earns enough extra credit to boost a C+ up to an A-. 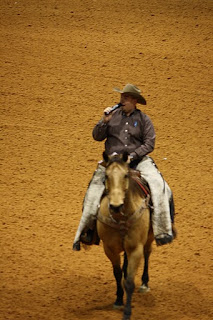 The evening began with quite a bit of pomp and circumstance. The Color Guard presented the colors; cowboys and cowgirls on horseback raced around the arena carrying American, Texas, and TAMU flags; the rodeo announcer led the crowd in a prayer; and local musicians performed both the National Anthem and America the Beautiful. The presentation was lovely, but also a bit much. I consider myself a fairly patriotic person, to the point that tears often sting my eyes during the National Anthem, but I believe that too much of a good thing can apply to displays of patriotism just as it can apply to consumption of brownies. In my opinion, less is more – or at least less is more engaging and powerful – when it comes to honoring our great nation. 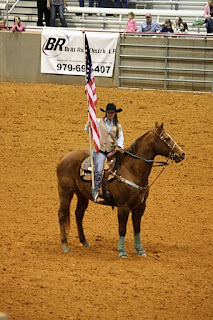 After the patriotic kick-off, the rodeo officially began with bronc riding. The first two riders were both injured, but that didn’t stop Will from begging, “Mama, can I get a horse?! Can I be a cowboy?!” and led me to answer him with a big, fat resounding “ABSOLUTELY NOT”. As the events – calf roping, break-away roping, barrel racing, goat tying, steer wrestling – went on, my kids grew less and less interested in the cowboys, cowgirls, horses, and goats and more and more interested in the arena’s metal bleachers. Tom and I, however, found ourselves completely and unexpectedly mesmerized. I had no idea the technique, strength, and general athleticism required to compete in this sport.

This series of photographs will give you a brief glimpse into the sport that is calf-roping.

As the horse and cowboy race past the starting line the calf is released (or perhaps shot out of? I'm not sure how they get the calves to run so fast) from the shoot. 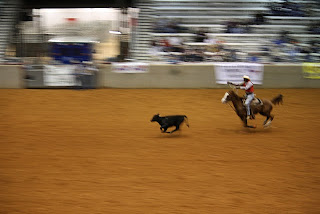 The cowboy lassos the calf, and at that exact moment the freakishly-well-trained horse stops on a dime to keep the calf from continuing to run (the end of the lasso rope not connected to the calf is connected to the horse). Before the horse comes to a complete stop the cowboy dismounts. 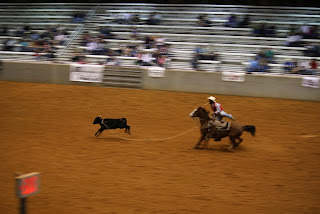 The cowboy runs down the rope to the calf... 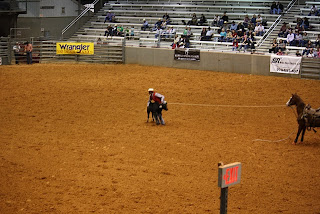 ...and whips (for lack of a better word) the calf onto its side with what appears to be super-human strength. 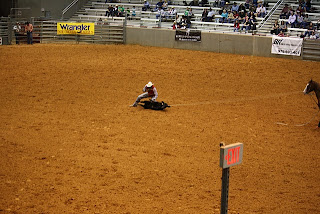 And finally, the cowboy ties up three of the calf's legs and raises his hands into the hair to signal that he's finished. 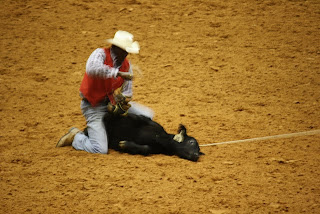 It’s important to note that the cowboy, from beginning to end, took only about 14 seconds to rope the calf. Holy cow. It’s alright to laugh at that pun – I did.

I wasn’t expecting to enjoy the rodeo – going that evening was more about experiencing something “Texas” and helping Will understand what he’d been learning about in school. But let me tell you, it was AWESOME. We are definitely going back, without the kids so that we can really focus on the competition, and hopefully wearing real-deal cowboy boots.
Posted by Chasing Roots at 4:43 PM

Email ThisBlogThis!Share to TwitterShare to FacebookShare to Pinterest
Labels: Down South, Family, Life, Up North