I started playing soccer when I was six years old. I played city league until the seventh grade, when I tried out for and made our area's competitive club team for my age group. It was around this time, when I was becoming more invested in the sport, that I started paying attention to and eventually closely following the college players in my area and the professional players we would oh-so-rarely see on television.

At one point, members of my club team and I had the opportunity to see the United States Women's National Team play. If memory serves me correctly, the game took place on the outskirts of Milwaukee, on a plain old grass field at a plain old park, and we watched without tickets and without assigned seats from plain old metal bleachers. The viewing environment was so unremarkable that I barely remember it...I do, however, remember how incredible it felt to watch those amazing athletes take the field.

Will started playing soccer when he was three years old. He played city league soccer until the third grade, when he tried out for and made our area's competitive club team for his age group. It was around this time, when he was becoming more invested in the sport, that he started paying attention to following closely the college players in our area and the professional players we would more frequently and regularly see on television.

Over the years, soccer has become one of the ties that binds Will and me together. We share a love for the game as players, but also as fans. We share a mutual respect and admiration for the USWNT in particular; they exemplify hard work and perseverance, support their teammates on and off the field, and play the game with both their heads and their hearts. They also stand - both publicly and proudly - for equality and inclusion, and are unapologetically authentic. From what I can tell, Will has only ever thought of these women as athletes and competitors...to him, and to many others, they are not nor have they ever been "female athletes" or "female competitors". They are representatives of their country on the world's stage, and role models to every young soccer player who eagerly and excitedly watches them take the field.

For years I have wanted to take Will to a USWNT game, and a couple of weeks ago I was finally able to make it happen.

The game was held in Houston, at BBVA Stadium. We arrived early (earlier than Will would have liked), but I didn't want to miss a minute of the team's warm up or the opening ceremonies. As the players emerged from the locker room and entered the field for the first time, I was suddenly struck by how significantly this USWNT experience differed from my first USWNT experience 30 years ago. This time these athletes would play not on the outskirts of a moderately-sized city, but in a major metropolitan area. This time these athletes would play not on a plain old grass field at a plain old park, but on grass genetically engineered specifically for professional soccer on a field in a world-class stadium. This time these athletes would play not with a handful of spectators watching from metal bleachers, but with thousands of fans screaming their names and wearing their jerseys from purchased seats. I couldn't help but tear up (for the first time - I cried two more times before the night was over) thinking about how unbelievably far these women have come. 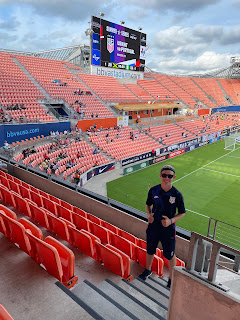 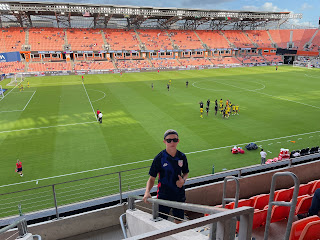 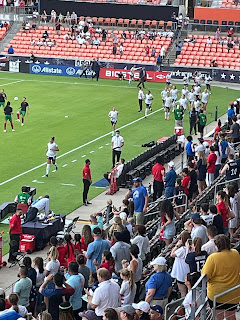 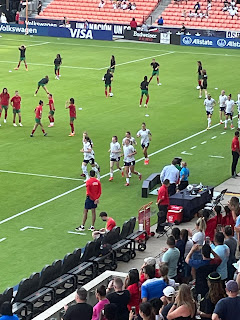 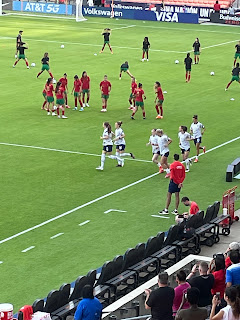 The team warmed up to a great playlist, one that included quite a few female empowerment songs. At one point, This One's For the Girls by Martina McBride started playing. I hadn't heard this girl power anthem in probably 15 years, but when it came blaring through the speakers I immediately remembered every word. 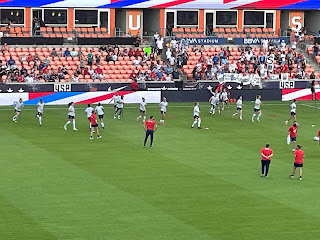 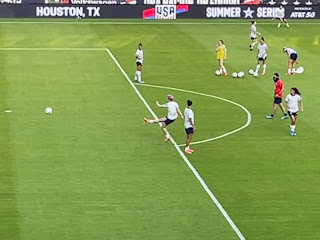 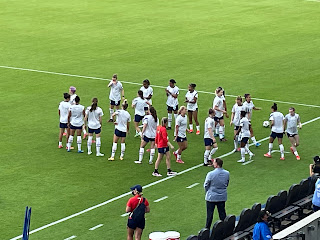 Just before the game began, the teams lined up for their National Anthems. As I listened to the first few bars, I took in my surroundings. I saw an incredibly diverse group of fans gathered to cheer for their country's national team as they prepared for the upcoming Olympic Games. I saw thousands of little girls looking up to their soccer idols and dreaming about what their own soccer futures could look like. I saw "Black Lives Matter" on the front of the team's travel jerseys and rainbow numbers on the backs of their game jerseys. I felt proud - more so than I'd felt in a long time - of my country, and of these players and those who came before them to build the foundation and grow the program. In case you hadn't figured it out yet, this is when I cried for the third time. (Will didn't really understand these tears either.) 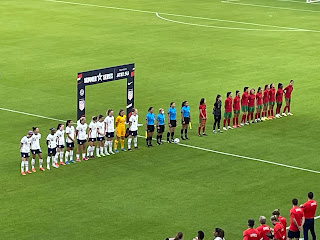 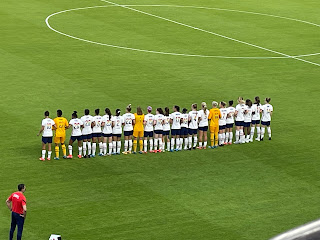 After ALL that, the game finally started. 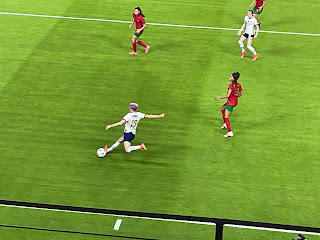 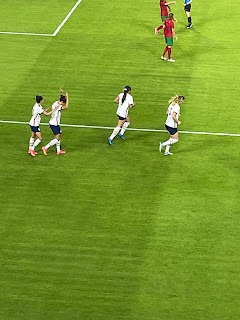 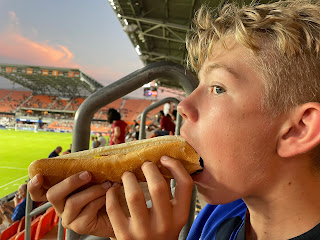 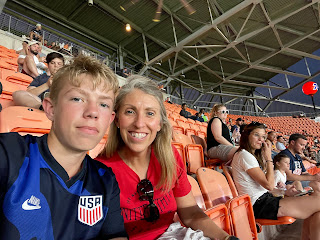 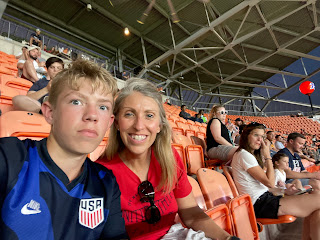 Will and I commentated all 90 minutes, as we both regularly do. To someone listening in, we probably sound like a combination of enthusiastic assistant coach and bantering sports broadcaster, me a little more on the enthusiastic assistant coach side and him more on the bantering sports broadcaster side. We also assessed the referees' decisions (as a new ref and an old ref respectively, he and I have a lot to say about referees, their calls, how they're treated, and the rules in general), and cheered loudly when "our" girls scored. At the end of the night, the USWNT walked away with the win but I too felt victorious. It was the game - the night - I wanted and needed it to be. One I'll always remember. 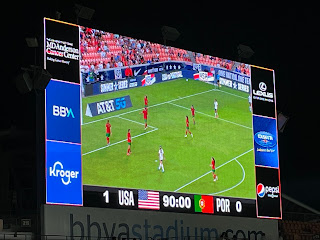 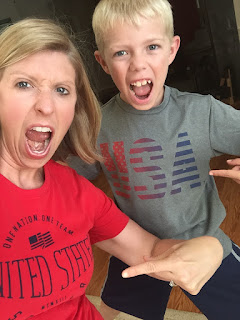 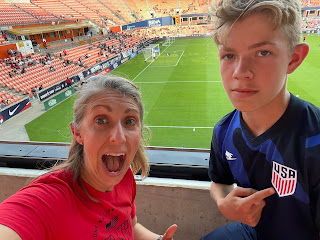 Note: it was 95+ degrees and 762% humidity outside that night. I'd like to think that the dramatic difference between the picture Will and I took six years ago and the picture we took a couple of weeks ago is due to the fact that I had sweated off any make up I'd had on that morning and my hair had taken on a humidified life of its own, but... At least my shirt still fit. 😂
Posted by Chasing Roots at 5:00 AM