Allow me to introduce you to our most interesting litter of kittens yet: Hallie's Hairstyle babies.

These three were rescued without their mama at around four weeks old. We knew they were eventually coming to us - our previous fosters had recently left, and my magic number for kittens is between two and four (much to Will and Hallie's dismay, I just can't bring myself to take on five or six) - so Six Kittens Rescue let Hallie name them. After multiple hours of brainstorming and texting back and forth with our SKR friends, Hallie decided on Mohawk, Mullet, and Bob...Hallie's Hairstyle Babies. Mohawk and Mullet are boys, and Bob - like the cute, girly haircut - is a girl.
Because they were still so young, they needed supplemental formula. But since none of them took to the bottle, they became "mush babies", which basically means they drink their formula poured over wet food in/from a low, wide bowl. Personally, I think a better name for this kind of dining plan should be "mess babies", because never in my life have I seen anyone or anything make bigger messes at mealtime.

The babies arrived at our house post-bath, so they were clean and soft and fluffy. That evening, we prepared their dinner, placed the dish on the floor of the bathroom*, closed the door, and headed out to dance and soccer. When we returned home a couple of hours later, the bathroom looked like a crime scene, or at the very least, the site of an epic battle between the kittens and their dinner. Food was EVERYWHERE. Poop was EVERYWHERE. All over the floor. On the side of the bathtub. On the cabinets, the closet door, and the walls. And there they were, three tiny precious balls curled into one slightly larger but still tiny ball, on their bedtime blanket that was...you guessed it...also covered with food and poop. Hallie and I stood in the doorway to the bathroom with our jaws on the floor. Finally she spoke, "Ms. Mallori was right, Mom. They are REALLY messy." No joke, kiddo.

* The kittens lived initially in our guest/kids bathroom because they weren't developmentally ready for a bigger space. We went in frequently to care for and play with them - Will occasionally did his homework sitting on the closed toilet seat, while Hallie and I would watch Netflix sitting on the bathroom floor. The pictures below are from the kittens' first night at our house, when we all hung out together in the bathroom and watched episodes of Jessie.

When the three tiny precious balls uncurled from one another, we discovered that they too were covered with food (and a little poop). The entire undersides of their bodies - feet, legs, stomachs - were wet or matted from wetness that had dried, and they had food in their ears, on their backs, and in the crevices of their necks. Our most frequently asked question quickly became, "how did you get food THERE?!" 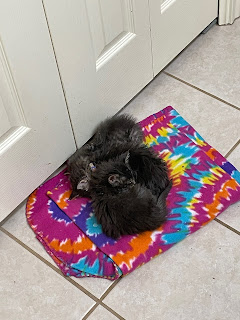 Out of curiosity, we watched them eat their next meal and our question was answered. Turns out food got "there" because the babies climbed directly into the bowl/dish to eat. We're talking entire bodies standing in - and then slipping and sliding around in - the wet food topped with formula. I'd never seen a form of eating quite so extreme.

And so then we learned how to bathe kittens, which despite having cats since I was five years old, I had never done. It takes at least two people, but three or four sets of hands on deck are even better. We also landed on bath time as our favorite time of day, because after the babies are washed and dried, they're once again clean and soft and fluffy and OH SO CUDDLY. After their evening baths we spend as much time as they want snuggling on the couch before they get tucked in for dinner and bed. 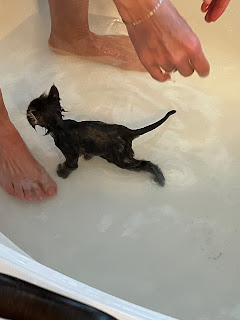 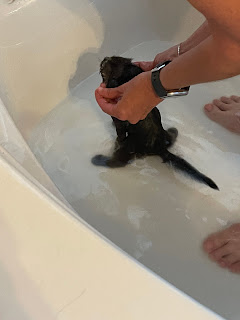 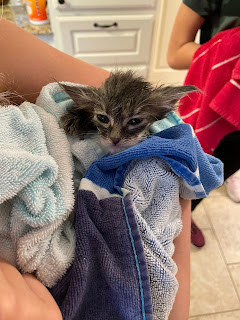 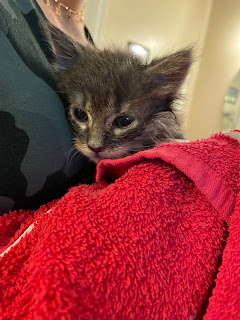 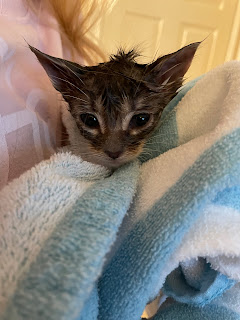 All three babies are working - and we're working - tremendously hard on eating wet food so their world can open up a little. Will's favorite part about kittens is having them as "study buddies", and they just can't join them in his room and on his desk and bed until they're not completely covered in goop of various kinds.