Reading
Recently I've learned - or maybe just come to accept - that I can only read books that start off strong. If a story takes more than 25 pages to ramp up, I'm outta there faster than Nike can climb up my leg when she hears her food cans being cracked open.
At the beginning of the month I tried to read Catherine House, but after realizing that every time I picked it up I'd forgotten what had happened previously, I finally set it aside and picked up Emma in the Night by Wendy Walker instead. I loved this book, and highly recommend it for anyone who likes psychological thrillers that twist and turn from start to finish. 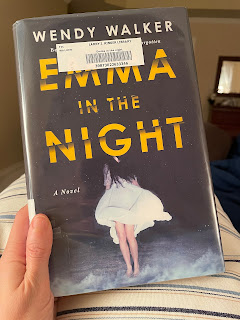 Watching
We didn't have a lot of time to watch new television programs or movies this month. We were busy with work, school, and extracurriculars, and then when we actually had a week off, we didn't have power or internet. Hallie and I did manage to fit in a couple of short and sweet movies though... First up, Disney's Secret Society of Second-Born Royals (on Disney +), which is about exactly what the title describes. These second-borns, who are unlikely to ever inherit the throne behind their older siblings, discover they have special super powers and that others like them have for years been (secretly) protecting their kingdoms as members of an elite crime-fighting and peace-keeping force. This movie isn't a Disney blockbuster - it was clearly designed for and works better on a smaller screen - but Hallie LOVED it and I thoroughly enjoyed it myself. Second, Pixar and Disney's Soul (also on Disney +), about a middle school music teacher's journey to reunite his body and soul after they're accidentally separated just before his dream of becoming a jazz musician becomes a reality. Hallie and I adored this film - it was heartwarming and tender, with beautiful characters and a fun soundtrack, and I suspect it could bring in a few awards in the coming months.
Listening To
Did you know Dateline has a podcast?! I have always enjoyed watching Dateline on television, but the show comes on at weird times and isn't necessarily the kind of program I want to record and watch at a later date. The Dateline podcast, however, is perfect for me, as it covers current and classic episodes featuring true-crime, documentaries, and deep dive investigations. Not to mention Lester Holt's sweet soothing voice, easing me through my day with tales of murder and mayhem...

Following
Wearing
Here's the thing... In preparation for round two of Snowpocalyse 2021, my mom bought me a new winter coat and a package of hand/foot warmers and then put them in the mail with a couple of extra pairs of nice mittens she had but wasn't currently using. (Really good winter coats are hard to come by in Texas but easy to find in Wisconsin. Yes, I could shop for a coat online, but I have much better results when my mom - graciously - shops for me in person and then mails me what she finds.) But as bad luck would have it, round two of Snowpocalypse 2021 delayed and then completely shut down our mail for nearly a week, so the package didn't arrive until the temperature outside had climbed back into the 70s. My coat is PERFECT though, so I'll probably crank up the air conditioning and wear it around the house.
Trying/Using
I bought the game What Do You Meme? Family Edition for my people for Valentine's Day, and we all loved it. I lost track of how many times Hallie exclaimed, "this game is so fun!" during our first round of play, and the game has come out multiple times since that first night. I'll probably add the original version to our game stash within the next couple of years, as I think they'll be ready for it by the time Hallie is Will's age. 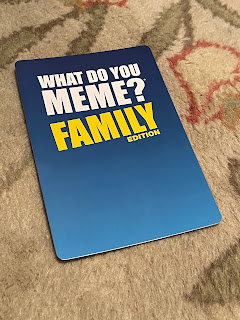 Eating/Drinking
I don't have much to show for myself in the Eating/Drinking category this month... We lost a week to snow/no power/ordering out, and most of the new recipes I tried were decidedly average at best. I'm hoping to spend a bit more time in the kitchen - and have a few recipes to show for it - in March!
The one solid recipe we tried was this Lemon Artichoke Fettuccini. I used 12 ounces instead of eight ounces of gluten-free fettuccini (I don't like the idea of putting four ounces of pasta back in the cabinet because it's not enough to use in a future recipe) and dried instead of fresh spices, but otherwise I followed the recipe exactly. Don't skip the optional toasted pine nuts - they were a delicious addition to the dish!

Feeling Good About
On to March, friends. May the odds be ever in our favor.
Posted by Chasing Roots at 5:00 AM