When Tom and I registered for gifts prior to our wedding, we chose everyday dishes that fell into what I would consider the middle range with regard to price. Family members and friends generously gifted us about half of the pieces we wanted/needed, and while we wanted to complete the set ourselves, we ended up unable to do so on our American Red Cross financial development associate and University of Michigan graduate student salaries. Instead, we returned the pieces we had received and used that money to purchase a couch, chair, and ottoman for our living room. That furniture is now 17 years old, and while it desperately needs to be replaced (we actually went furniture shopping - but weren't quite ready to make a decision - the weekend before the world shut down last March), it has treated us well and we still love it.

Shortly after we were married we adopted two kittens: Duke and Clementine. A woman I worked with at the ARC came in one morning and wondered aloud at our staff meeting if perhaps her cat might be pregnant. She ran home at lunch to grab something and discovered that yes, her cat was pregnant...as evidenced by the five newborn kittens who were now sleeping peacefully on the floor of her closet. Tom and I decided this was a sign, and six weeks later we brought Duke and Clementine home.
While he started out as a normally sized kitten, Duke eventually grew into a gigantic cat, weighing in at nearly 20 pounds. He loved sleeping on the couch, specifically on the back of the couch on one specific cushion. Over time, his weight caused the cushion to compress, to the point that even when Duke wasn't sleeping on the couch, the indentation was VERY obvious. I tried for quite a while to get Duke to sleep somewhere else, if even just a different cushion so that the three cushions would indent evenly, but he would have none of it. After Duke moved in with my parents (we were trying to sell our house, so my parents volunteered to keep the cats during that process), I tried to return the pillow to its original shape, but I was never successful.
A couple of years after Duke passed away (he was hit by a car), I had to give the couch a good scrubbing, thanks to a topless runaway Hallie - "I won away fwom you!" - and her topless hot pink marker. As I was cleaning the couch, I glanced up and noticed for the first time that all three back cushions looked exactly the same. Duke's indentation was gone. And I cried.
~
Almost all of the kittens we've fostered have gravitated toward the same three pieces of furniture: our upholstered antique rocking chair, my fabric desk chair, and the couch. But not just the couch...the cushions on the back of the couch. And not just the cushions on the back of the couch...Duke's cushion on the back of the couch.
I didn't see it, or at least make the connection, at first, perhaps because Tux never paid much attention to the couch. It wasn't until our third - I think - batch of kittens that I started to notice how every single one of them had eventually found their way and become attached to that particular couch cushion. The cushion has returned to its original shape, yet they know it's been worn in. Duke hasn't rested his head on the cushion in more than 10 years, yet they know it's a safe place for them to rest their own heads.
I didn't realize how uplifting it would be to bring kittens into our home, and I certainly didn't realize how healing it would be to see them resting in Duke's favorite spot. 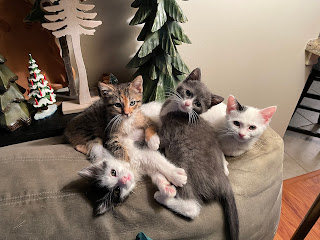 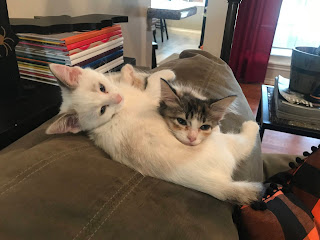 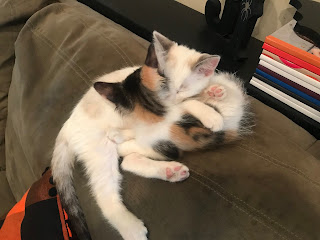 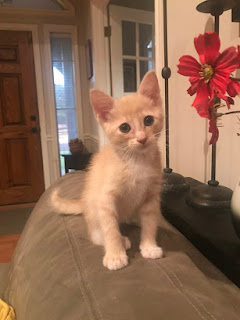 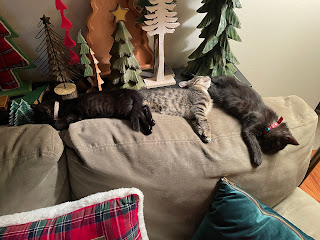 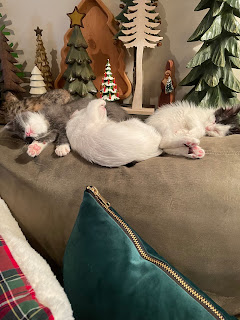 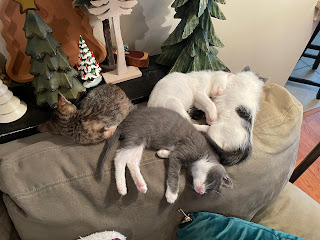 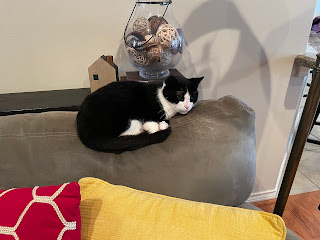 RIP, big buddy. We remember you often and fondly.
Posted by Chasing Roots at 5:00 AM