Reading
Earlier this month I devoured The Lies That Bind by Emily Giffin. I used to read her novels as soon as they became available at our public library, but in recent years I'd drifted away from her style of writing. This particular novel of Giffin's, however, had a twist I hadn't seen from her before, so I decided to give it a try. In the end, I'd call this book a winner: engaging and intriguing from the first page to the last, with a satisfying ending. 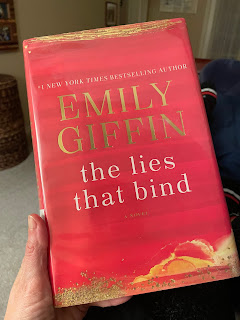 On the occasional early evening at home, I have been reading The One and Only Ivan by Katherine Applegate to Hallie. I'm a little ashamed to admit...I have never liked reading chapter books to my kids. I enjoy reading picture books to them, but when it comes to reading chapter books, I prefer to skim, as that's how I read to myself. I cruise past "he said" and "she explained" and sometimes even unnecessarily (to me) long descriptions, and not being able to do this when I read out loud is incredibly frustrating. That said, I LOVED reading this book to Hallie and she LOVED listening to it. I think my shift in mindset had to do with how the book is written - the text is clean and easy, the story is simple and straightforward without any "fluff", and there are fewer than average words on most pages - but whatever the case, I'm grateful Hallie and I found a chapter book we could share and enjoy together. And now we're on to the movie! 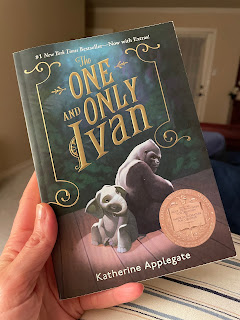 Watching
On New Year's Eve we watched and loved Disney's live action Mulan. (Note: when the movie first came out you had to purchase it for $29.99 through a Disney+ subscription, but that is no longer the case.) The film was visually beautiful with bright, vibrant colors; full of well-crafted and -executed action sequences; and perhaps most importantly, a powerful story about female-led heroism and bravery. Definitely a win for all four Ferri!
As Hallie and I searched for our next sitcom, I remembered one I'd started years ago and of which I'd only made it through only a couple of episodes. We started One Day at a Time, a sitcom (apparently based on a sitcom of the same from the from the 1970s) about a Cuban-American family living in Los Angeles, and were quickly reeled in; we finished the three seasons on Netflix in record time, and eventually were able to watch the fourth and final season (all but episode #1) on CBS online. This program dealt with a lot of heavy topics - mental illness, homophobia, racism, and mental illness - in a way that felt age-appropriate for a nearly 12yo and prompted a number of important conversations between Hallie and me. I desperately wish this show would have been renewed for additional seasons...
After Will and I finished The Mentalist, we needed a new show to watch together. I remembered one (apparently remembering television shows I watched ages ago was this month's theme) Tom and I watched when it first came out called Lie to Me. I can't consciously recall the specifics of any plot lines or endings, so it hasn't felt like rewatching a show; instead, it feels like watching a new show that I somehow manage to "call" the ending of more frequently that I should. I think Will's impressed. (Parents of teenagers will know that I am OF COURSE kidding when I say that Will's impressed with anything I have ever done, am currently doing, or will ever do.)
Tom and I are in search of a new "grown up" show. We tried the old Twin Peaks, but it put me to sleep twice, and we're also trying out The Mayor with Ted Danson. I'll keep you posted on that one!
Listening To
At this point, most of you have probably heard this song (a cover of Memories by Maroon 5) by One Voice Children's Choir. Hallie and I adore it (I only cry about half the time when I listen to it/watch the video), which let to us traveling FAR down the rabbit hole that is the group's YouTube channel. This group makes me miss singing in a choir, and excites Hallie about *hopefully* being in a choir next year.
Some of our other favorites include Better When I'm Dancing, True Colors, See You Again, Believer, and This is Me.
Following
Wearing
Every once in a while we have chilly or even cold mornings here in Texas. And because I head out for my daily walk between 6:30am and 7am, when it's chilly or cold outside I have to dress in light layers so I'll feel moderately comfortable both at the beginning of my walk, when my body is cold and stiff after not moving all night, and also at the end of my walk, when I've been exercising for nearly an hour. My problems related to topic are twofold. First, I no longer own light layers. I sold or donated many of them shortly after moving here, and those I kept wore out and were never replaced. Second, I'm really picky about this kind of clothing. I need these pieces to be warm but also moisture-wicking, and I want them to be fitted; interestingly, fitted long-sleeved workout tops are difficult to come by these days, as fitted is apparently out of style.
After listening to me talk about my problems for a few days straight back in December, my mom ordered me two of her favorite light layering shirts from the company Cuddl Duds. After just one wear, I raved about them to my mom...so she sent me four more...and then she bought me two more. So in the span of a month I went from zero good light layers to eight good light layers. And now that I've tried Cuddl Duds, I'll never go back to anything else - these shirts are amazing, and I highly recommend them for outdoor exercise, extra warmth while sitting at soccer tournaments or outdoor dance performances, and even every day wear.
You can find these Cuddl Duds shirts on the Cuddl Duds website, but they're almost always cheaper on Amazon, at Kohl's, and on Zulily from time to time as well.
I strongly dislike selfies, so I'm not posting a picture of me in one of these shirts. And since they don't look very good when photographed spread out on the floor, I'm just sharing links. First, here's the link to my favorite of the Cuddl Duds shirts - the Software Crewneck Top - on the Kohl's website. I have it in black, gray, ivory, pale pink, black and gray cheetah print, and black and red buffalo print. I also have the Climatesmart Crewneck Top in a dark blueish green and maroon.
Trying/Using
An influencer I follow recently talked about a new kind of hair elastic, but the brand she liked cost more than I was willing to pay for something of which we lose, on average, one a day. This version costs considerably less but still does an amazing job of keeping my hair pulled back but not damaging or breaking any of the strands. I also think these elastics create less of a crease, so if I pull my hair back to workout and then don't want to wash and dry post-workout, I can more easily and quickly revitalize my hair for the day. 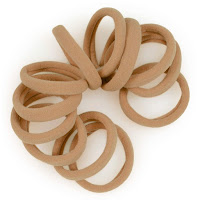 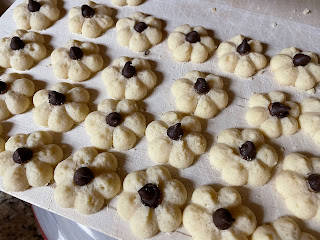 Feeling Good About
On to February, friends!
Posted by Chasing Roots at 5:00 AM