Reading
The Ballad of Songbirds and Snakes - Suzanne Collins' prequel to The Hunger Games, for which I waited eagerly for months - did not disappoint. The story begins 64 years prior to our introduction to Katniss, as preparations are being made for the 10th Hunger Games. The protagonist is Coriolanus Snow, who as a high school student in the Capitol is suddenly thrust into the figurative and literal spotlight as he attempts to navigate his new role as mentor for the girl tribute from District 12. This particular Hunger Games becomes a turning point in the trajectory of this horrific tradition, but also in the life of one-day President Snow. If you enjoyed the original series, I highly recommend giving Songbirds and Snakes a read! 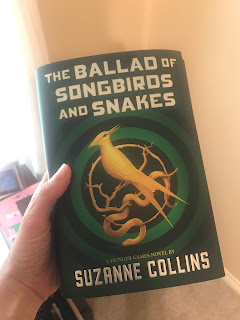 I'd love it if Collins wrote about Haymitch's Hunger Games next...

Watching
The second half of the final season of Alexa and Katie came out on Netflix midway through the month, so Hallie and I binged it last weekend. Y'all, the series finale about did me in. I haven't cried that hard since Herb Brooks' pep talk before his USA men's hockey team took the ice against Russia during the 1980 Olympic Games. (The version seen in Miracle, of course. I have no idea what the real Brooks said before the real USA men's hockey team took the ice that spectacularly dramatic day.)

Hallie and I originally picked Alexa and Katie as a filler, to tide us over after Liv and Maddie, but it ended up becoming one of my favorite series. This style of television show may not be everyone's cup of tea, but if you're looking for something to watch with your tweenage daughter that won't make you crazy - and just might remind you of your own tweenage years spent watching Full House and Family Matters on TGIF - give Alexa and Katie a try.

In between Mentalist episodes, Will and I lost ourselves in Inferno (he recently read all of Dan Brown's books), and as a family we watched Catch Me If You Can - I was surprised at how well both went over!

Hallie and I also watched the end of the final season of Fuller House (the creators came up with a lovely ending. It was no Alexa and Katie, but we still enjoyed it) and added a few movies to our lengthy movie list:

Listening To
While catching up on a couple of podcasts on which I'd fallen behind, I listened to and was fascinated by "Wolf 10" from Criminal. Equally intriguing was its companion episode, "The Wolves", on Phoebe Judge's second podcast, This is Love. I then started working my way through the third season of This is Love, which is all about how animals show love, the love between animals, and the love between animals and humans. Not to be missed is "Roselle and Michael", about their shared experience escaping the North Tower of the World Trade Center on September 11th.

1. I sleep with this orthopedic pillow, which makes my hips hurt less than they did before.

2. I clean my grout, using this tool, which does an amazing job.

Unrelated to being an old lady, I learned this month that our library offers curbside pick-up! The kids and I were desperate for new books to read (we're not comfortable going into establishments like the library yet), and curbside pick-up turned out to be a safe and easy way for us to restock our library book supply.

Wearing
My quarantine kryptonite? T-shirts with important, interesting, fun, or clever sayings or pictures on them. Since I basically alternate between wearing jean shorts and a t-shirt and one of my three Walmart rompers, all of these shirts are getting plenty of wear!

Eating/Drinking
We tried close to 10 new recipes this month, but only a few were tasty enough to make it to the Monthly Medley.

Be well, friends.
Posted by Chasing Roots at 5:00 AM