When preparing to write a new post, I almost always do a quick search of Chasing Roots to pull up any previously written posts on the same subject. This process reminds me what I have and haven't covered in the past, helps me nail down a solid starting point, and gives me direction going forward.

When preparing to write this new post, I performed my usual quick search and was shocked to find that in more than nearly eight years and 1,500 posts, I have only mentioned the Newman Singers twice. Considering how involved and invested both Tom and I were in the group and the special place the group held - holds - in our hearts, this "statistic" surprised me. It also helped me nail down a solid starting point...the beginning.

A little over a year later and on the first day of his freshman year, Tom auditioned for and made the Newman Singers as well. We met that night, at 9:30pm, at his first Newman Singers rehearsal.

For years Tom and I, along with between 40 and 70 of our closest friends, traveled throughout the Midwest and across the country, spreading the word of God through music. California and Nevada to the West, Montana and the Dakotas to the North, New York and North Carolina to the East, and Louisiana and Florida to the South. More than once we even ventured to Texas...I still remember my first drink on the San Antonio River Walk and first cheeseburger at Whataburger, experiences that happened on a Newman Singers trip and long before we ever moved to the Lone Star State. 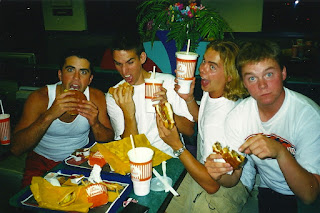 We made lifelong friends. We worshiped in some of the most beautiful churches in the country. We met, celebrated mass with, performed concerts for, and stayed with hundreds of amazing church members and host families. And in between our liturgical and performance responsibilities, we experienced what our incredible country has to offer: we watched 4th of July fireworks over the Pacific Ocean in San Diego, put on a show at The Luxor in Las Vegas, explored the Garden of the Gods in Colorado Springs, hiked through and watched Old Faithful erupt in Yellowstone National Park, celebrated Mardi Gras in New Orleans, met Mickey Mouse at Disney World, dipped our toes in the Atlantic Ocean in Virginia Beach, and paid our respects at the Lincoln Memorial in Washington D.C.

It was as members of the Newman Singers that Tom and I became friends. Our experiences brought us closer together, and eventually we started dating...the rest - they say - is history. Without the Newman Singers, Tom and I would never have met, fallen in love, gotten married, and built our family. At the risk of sounding overly dramatic, we owe the life we lead today to that group.

While on their most recent winter break, the Newman Singers went on tour to, among other states, Texas. They gave a number of concerts in the San Antonio area, and then on their way back toward Iowa, they stopped in Anderson - just 20 minutes from our house - for a final Texas hurrah. The Anderson concert happened to fall on our 15th wedding anniversary, which felt like a sign that we were meant to celebrate our "family birthday" with the Newman Singers.

18 or so years after we left the group, much of the concert remains the same: many of the same songs, most of the same jokes, slight variations on the same dances. And while masses and concerts had begun to feel monotonous by the time we moved on (hundreds of masses and hundreds of concerts over the course of four years), on our anniversary night every moment of that concert felt new and fun and full of joy once again. I was reminded of why I joined in the group in the first place, why I dedicated so much of my college years to the group's mission, and how grateful I am to have been a part of something so much bigger than myself.

I was also reminded - an added bonus and funny joke - that I am still "the star" of the Newman Singers poster... 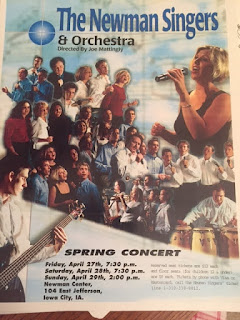