Writing
Though I didn't take on any new projects over the holidays - or through the middle of February, for that matter, thanks to the January Variety Show and February Sock Hop - I did see a few writing projects in print during those months. I had an article about the historic Stagecoach Inn in Salado in the December issue and an article about the Texas Parks and Wildlife Department's Artificial Reef Program in the January issues of Texas Living, and I have a new post up over on the Mama Bear Dares blog - check it out here! (Teaser: “Have nothing in your house that you do not know to be useful or believe to be beautiful.”)

Reading
I didn't finish any books this month, but in preparation for watching The Handmaid's Tale on television (after I sign up for a free 30-day trial of Hulu), I have been reading the book. It comes across, at least to me and thus far, more like an in-depth description of a complicated society rather than a story being told, but I expect that will change as I make my way through the second half.

I am also reading Wonder with the kids, which we're all enjoying thus far. Will watched the movie at school, and assures us we'll laugh and cry as much during the film as we're laughing and crying throughout the book.

Watching
The GREATEST Showman. I took Hallie and a friend, and the movie lived up to every single one of our expectations. The singing and dancing truly blew us away, and the movie was so well cast, from the children to "the Oddities" to the main characters. The girls found grown up Zac Efron kind of funny though (apparently they were expecting Troy from High School Musical), and didn't like it when he kissed his love interest. I, on the other hand, found grown up Zac Efron quite visually pleasing and didn't mind the kissing one bit.

We also watched as many minutes of the Olympics as we possibly could, however the time difference made it difficult and at times frustrating, especially for Will. He missed a lot of action he desperately wanted to see - the women's hockey final, for example - because the events started multiple hours past his bedtime.

Listening To
Besides the soundtrack to The Greatest Showman? Absolutely nothing. Since Valentine's Day, while in the car (including multiple drives to Houston for soccer games) we have listened to ONLY those nine songs and two reprises. Tom can't stand listening to the same music over and over, but the kids are just like me in that when we find music we love, we want to keep listening until we know every word and every note. 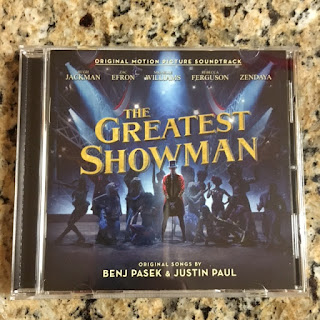 Trying/Using
I rarely lose my phone or keys for longer than five minutes, but when I'm running out the door in a hurry, those five minutes feel like an eternity. Designed to help remedy this problem, Tile Mate is a bluetooth tracker that attaches to a key ring (or pretty much anything else) and connects to an app on a cell phone. Open the app and activate the search function on the phone to find the keys; press the button on the bluetooth device on the keys to find the phone. 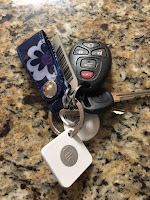 Tom bought me one for my birthday, but we didn't set it up until last month...and it's AWESOME. And yes, the ringer that alerts you to the phone's location STILL WORKS if your phone is on silent.

I have no skin in the Tile Mate game other than as a happy customer who appreciates having the ability to 1) find the phone her son left on his desk and 2) the car keys her daughter put in the wrong kitchen drawer. Hallelujah!

Wearing
February felt like true winter (rather than Texas winter) here in College Station, so I found plenty of opportunities to wear this cozy trench vest from Talbots. I'll admit, Talbots is not my favorite place to shop. But after my mom showed me a couple of cute pieces she'd picked up on clearance, we decided to visit our local store. Most of their clothing doesn't fit me - both size-wise and style-wise - but on occasion I come out feeling like I won the shopping game! 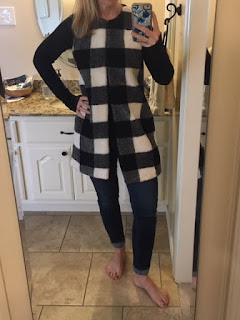 I mentioned last month that I sent a number of clothing items, pairs of shoes, and accessories to ThreadUp and that I hoped to have enough information by this month to let you know my thoughts on the service...so here we are!

So, in a nutshell, would I recommend ThreadUp? Yes. The process is a quick and easy way to clear out clothing, shoes, and accessories that are in good condition but that you no longer wear. The payout system and amounts aren't as solid as I think they should be, but I would still do it again!

Want to give ThreadUp a try? Use this link to get started and you'll get $10 to spend!

Eating/Drinking
I made quite a few duds - from main courses to desserts to a breakfast coffee cake - this month. All were edible, but they just didn't make my mouth water nor did they lead to requests for seconds from the other three Ferri. The exceptions, however, are below - enjoy! 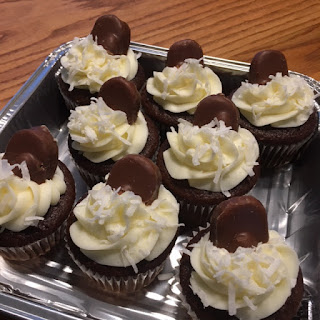 Feeling Good About
A few today... One about a dog, one about a cat, and then two about comic strips - one about "being a force for good in an often dark world" and one about "finding love in the little moments".