1. This week Hallie attended Drama Camp through our new, local chapter of an international drama program. Though her summer has included lots of fun activities, for a yet-to-be-determined reason summer has also caused Hallie a great deal of stress and anxiety. But Drama Camp has been, simply put, a good thing. A bright spot. Hallie even used the words, "I love it" (she rarely uses those words), and described Drama Camp as both the best part of one day and what she looked forward to the next day. 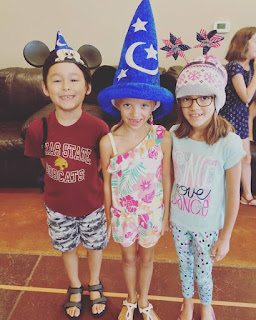 She and I both REALLY needed that bright spot.

2. While Hallie stretched her creative muscles, Will attended a Robotics Camp at FUNgineering. It was like the mother ship calling him home. 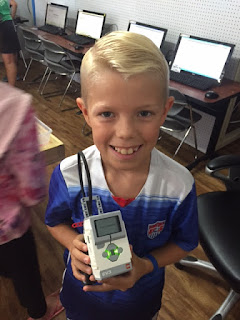 We may live in a small(ish...though rapidly growing) town, but when it comes to summer activities and camps, our community - the city, the schools, and privately-owned local businesses - does a bang-up job of making sure our kids have a wide variety of opportunities available to them.

3. While working on his soccer skills - specifically his shot and tricks - Will has been single-handedly (footedly?) damaging our bushes, weakening our fence, and destroying our sprinkler heads.

In an attempt to save what remains of our landscaping, fence, and sprinkler system, I bought Will a 12' x 6' x 4' soccer goal. Tom and Will assembled it one evening, and now Will spends quite a bit of time every afternoon making sure he'll be ready when his soccer season kicks off on August 8th. 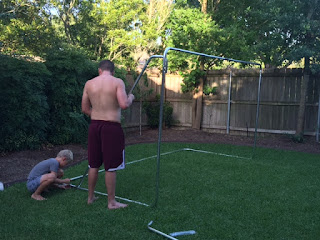 Minutes after the goal had been assembled, Will shot the ball just wide of the goal and into our (almost dead) lemon tree with so much force that the tree pulled up out of the ground, roots and all. We might need a bigger goal...

4. This is neither here nor there, but I truly enjoyed watching this performance of "Bring Me Little Water, Sylvie" by the United States Navy Band's Sea Chanters chorus. These women have tremendous talent, and I found both their stage presence and their acapella harmonies mesmerizing.

5. Last but not least, tomorrow I'll be here: 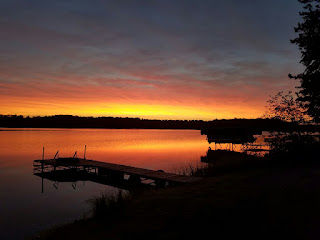