Thank you to everyone who has already visited, "liked", and/or shared the new Chasing Roots Facebook page! I am truly grateful for your support.

If you haven't yet had a chance to check out the page you can do so by clicking here!

Shortly after we moved to Texas the Green Bay Packers won the 2011 Super Bowl.
Because I fully expected Aaron Rodgers to lead my team back to the big game in 2012, midway through the regular season I purchased matching Packers shirts for the kids and an adorable "cheesehead" hair bow for Hallie. I may or may not have jinxed my boys, but whatever the case, they fell apart during their first round playoff game against the New York Giants. Because our Green Bay attire and accessories had received far less use than anticipated that season, on Super Bowl Sunday I brought everything out for one more wear.

As he pulled his Packer shirt over his head, Will asked excitedly if this meant Green Bay had made it to the Super Bowl. When I explained that no, the Packers weren't playing that day, Will gave me this face:
And thus began the tradition of Super Bowl Sunday Protest Pictures.

In 2013 the Packers won their Wild Card game but lost the following week to the San Francisco 49ers. On Super Bowl Sunday the kids and I dressed in our Packer shirts - and Hallie wore her cheesehead bow - so we could once again capture our feelings in a photo. The kids looked a little more frustrated in 2013 than they looked in 2012...
In 2014 the Packers lost their Wild Card game, once again knocked out of the tournament by the San Francisco 49ers. The tradition continued with the kids donning green and gold for their angriest picture yet.
Which brings us to 2015…the year the Packers quite literally gave away to the Seattle Seahawks both the NFC Championship title and a ticket to the Super Bowl. According to tradition, Will and Hallie dressed in their matching tees - which barely fit them now - and growled for the camera. 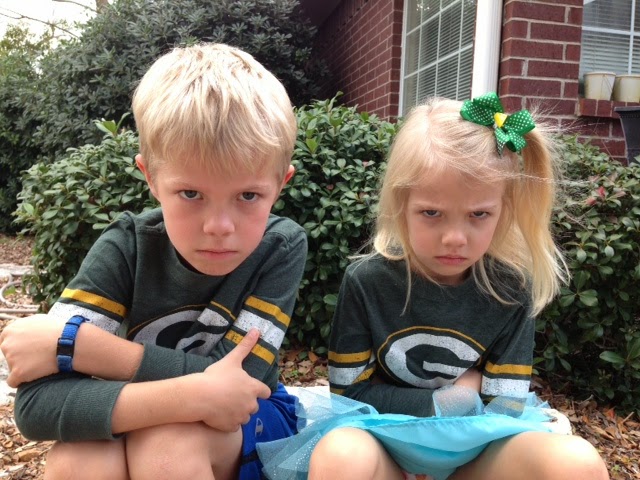 Super Bowl Sunday marks the end of the NFL season, so as of Monday morning these shirts are neatly folded and tucked away in the kids' drawers…waiting for victory in 2016.

We decided not to replace these shirts - Will's is a size 5 and Hallie's is a 2T - until the Packers make it back to the Super Bowl. I think Will is secretly hoping this doesn't happen for a long time so that someday he can "hulk" out of his current tee.
Posted by Chasing Roots at 4:00 AM