Three years ago we decided to try growing our own food. We planted seeds - tomato, pepper, onion, lettuce, and spinach - in pots and tended to them until they were ready for transplant into the garden bed we built with our own eight hands. Everything grew rapidly at first, but by midway through the summer only our peppers, of which we had enough to feed roughly half of College Station, and a handful of spinach grew to the point of edibility.

Two years ago we tried again, planting three of the same vegetables but relocating our garden bed to a sunnier spot in the yard. This time around the tomatoes survived, thrived, and overtook our lives and the peppers and onions produced respectably. To say we felt good about our gardening skills would have been the understatement of summer 2013.

But then last year….last year Mother Nature humbled us. We followed the exact same step-by-step process as the summer before, and felt so confident in our green thumbs that we branched out and planted blueberries and strawberries alongside our tomatoes, peppers, and onions. To show for our hard work we ended up with fewer than 10 grape tomatoes and absolutely nothing else. Master Gardeners we're clearly not.

Those of you who've successfully grown food are probably thinking that Tom and I would do better at this gardening thing if we actually read something - other than the backs of the seed packages - about cultivating produce. You would be correct. And yet we probably won't change our laissez-faire style. Ridiculous, I know.

After last summer we had no where to go but up, so we spent most of our Valentine's Day (hello, 75 degrees on February 14th!) working in the yard. In the garden bed Will and I planted red romaine and butter leaf lettuce, broccoli, and red and yellow onions. In two oversized pots Hallie and I planted cherry tomatoes. And then, in a corner of the yard that had previously been home to two dying evergreen bushes, Tom, the kids, and I planted the one thing I've always wanted in my backyard (besides a splash pad). We planted a nectarine tree.

Ok, so I really wanted an orange tree, but the nursery's spring shipment of citrus trees had yet to arrive as of Saturday afternoon. None of us wanted to postpone our Valentine's Day tree planting though, so we picked out a nectarine tree to start with and cleared a spot to add an orange tree once the citrus trees have been delivered.

Valentine's Day fell, calender-wise, perfectly this year. School and classroom celebrations took place earlier in the week, which freed up the holiday itself for the activities we love. Tom played disc golf, I went to Zumba, the kids played outside, we ate Spoon's frozen yogurt for lunch, Tux discovered an infatuation with leaves and introduced himself to a lizard, and we spent time together getting dirty, working hard, and loving on the earth. 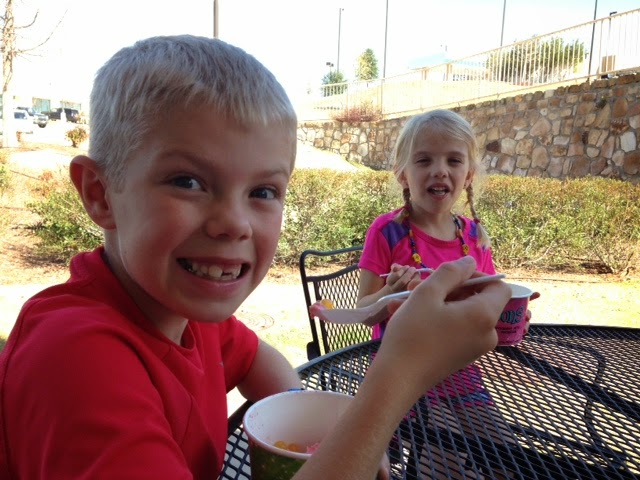 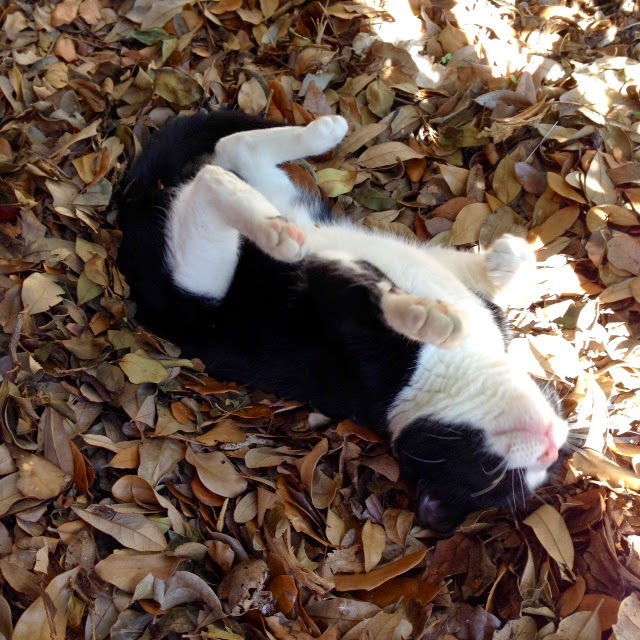 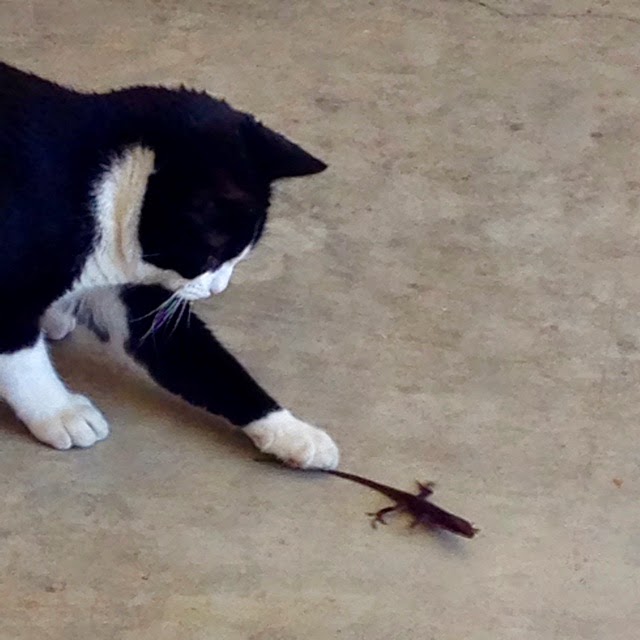 I've told myself that the extra Valentine's Day affection we put into digging and watering and fertilizing will lead to extraordinary results this year. I'm only just plain ole' crossing my fingers that the fourth time's a charm. 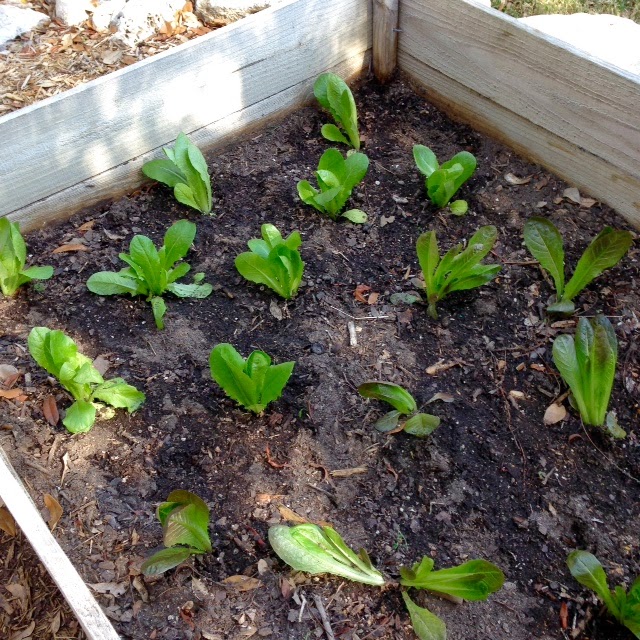 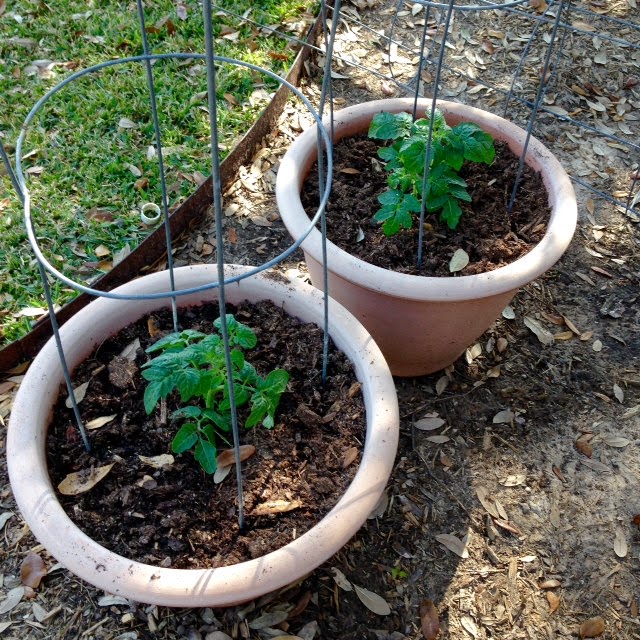 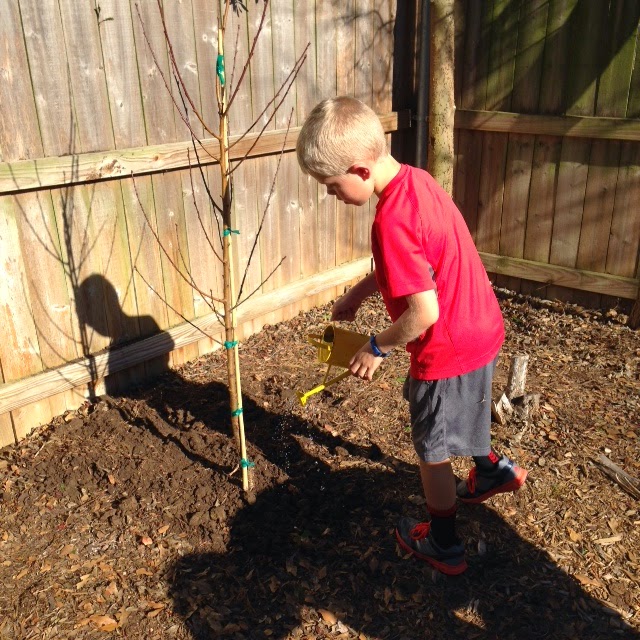 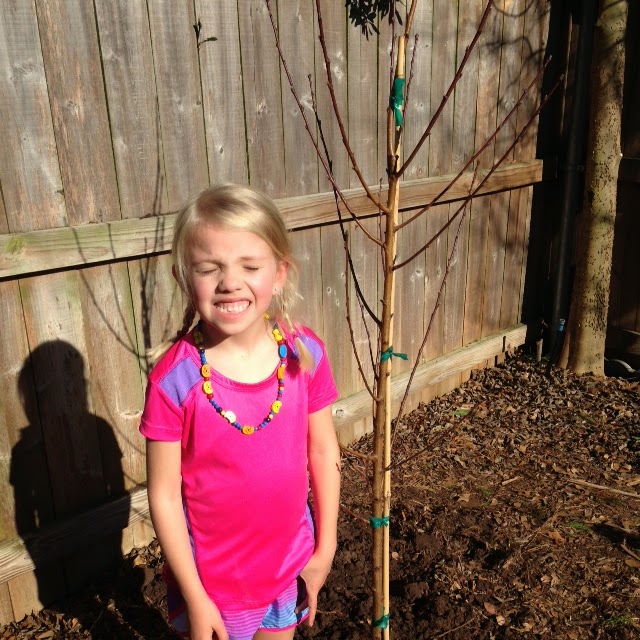 Thank you to everyone who has already visited, "liked", and/or shared the new Chasing Roots Facebook page. If you haven't yet had a chance to check out the page, click here!
Posted by Chasing Roots at 5:00 AM