Not My BEST Midterm Report Card...

I wrote my 2014 New Year's Resolutions on December 31st, edited them on January 1st, and posted them here on Chasing Roots on January 3rd. And then I didn't look at them again until today - June 27th - when I pulled them up as a reference for writing this post.

I expected to find that I hadn't accomplished much of anything, but instead discovered that I made progress on many - though not all - of my 2014 resolutions. Here's my midterm report card!

Eat cleaner. Specifically, I'd like to bake my own bread and granola bars. (B-)
We've cut back on the (non-whole wheat) bread, processed granola bars, and potato chips that, while never staples in our diets, probably appeared a little too often. I found a granola bar recipe that both Tom and I enjoy, but because the kids could take 'em or leave 'em, I only make them periodically and in small batches. (Click here for the granola bars. I cut the brown sugar in half and left out the wheat germ because, well, because wheat germ weirds me out.) I tried quite a few bread machine recipes, and while many tasted perfectly fine, none resulted in bread that worked for sandwiches because the outsides were too crusty and the insides were too soft. If you have one, please share your sandwich bread recipe!

She stands like this - on a chair with her face pressed as closely to the viewing window as possible - EVERY time we use the bread machine. 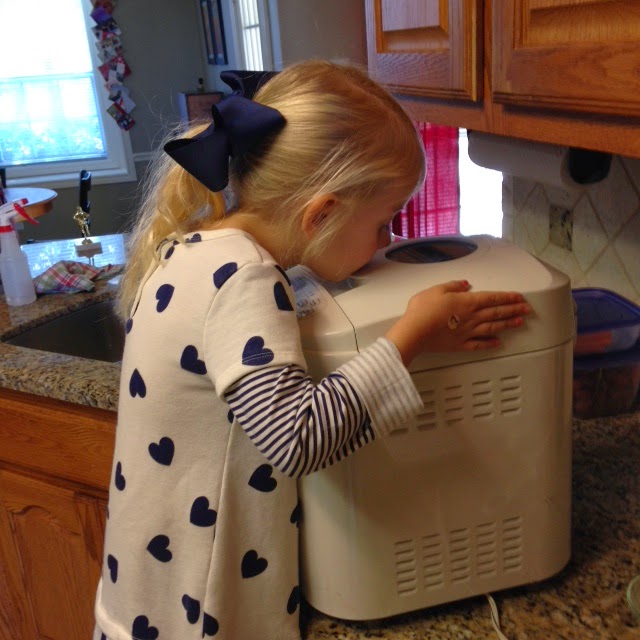 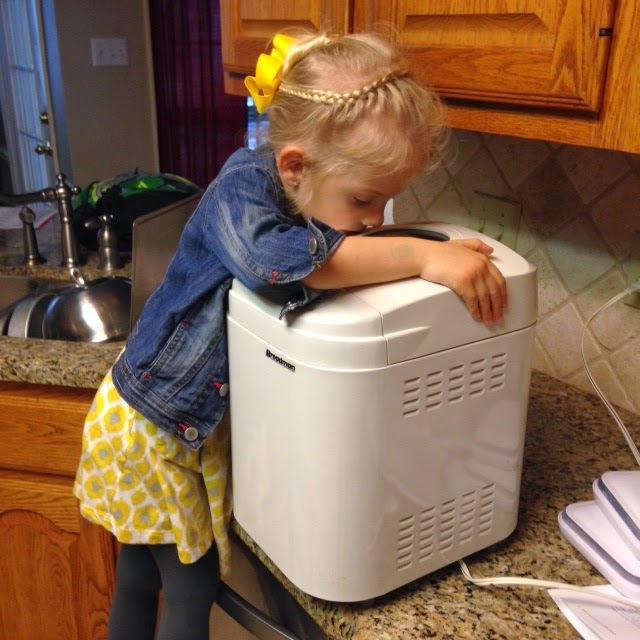 Spend less. I don't spend frivolously, but in the coming year I plan to keep better track of where our dollars go and purchase only what we really need. (C+)
During the first three months of the year I held tight to my pocketbook strings. But then April rolled around… Throughout April, May, and June, expenses associated with Hallie's birthday, Easter, end-of-the-school-year parties and gifts, summer clothes and activities, and stocking up for our month-long road trip added up and brought me down. I aim to keep spending to a minimum for the next couple of months because I know back-to-school, Will's birthday, and Christmas will be here before we know it!

Streamline my volunteer efforts. This will occur naturally come fall, when both Will and Hallie attend the same school, but I can expedite the process by simply waiting to say "yes" to volunteer requests until I've had the opportunity to evaluate whether or not the nature of and time commitment for the request make sense for me and my family. (B-)
Yes, the kids will attend the same school this fall, which means I can dedicate my school-related volunteer efforts to just one academic institution instead of two, but … at that one academic institution I just joined the Board as the Secretary for the 2014-2015 school year. This new commitment is a big one, but I'll be working alongside a wonderful group of Board members and PTO parents with the shared goal of supporting teachers at and strengthening all aspects of my kiddos' elementary school. I can't wait!

Date my husband. Traditional weekend evening dates don't always work for us, both because of our vastly different schedules and because paying for good childcare makes child-free activities cost twice as much, so our plan is to trend toward lunch dates, coffee shop "work" dates, and at-home-after-the-kids-fall-asleep dates. (F)
The spring semester nearly crushed Tom, so after a date in late December, we didn't go on another date - not dinner, not lunch, not coffee - until May 30th. No, I take that back - we went on a two-hour date to Sam's Club in April. We MUST do better come fall.

Stop feeling guilty. About eating a brownie two brownies for dessert, drinking a Blue Moon on a Tuesday evening, reading a book instead of writing or researching while the kids are at school, and focusing my energy on people who build me up (instead of on those who weigh me down, which I admit to doing in the not-so-distant past). (C)
Um, I'm working on it.

Finalize our will. Though we've made arrangements for our children should something unfortunate happen to us, Tom and I MUST finalize this document before the end of 2014. (F)
I didn't intentionally put this resolution off because it requires facing/discussing a difficult topic, but with Tom's spring semester schedule barely allowing him time to sleep…I guess I just felt like this wasn't a project I could tackle without at least some input from him. Now that he's around a bit more we should be able to cross this one off the list. 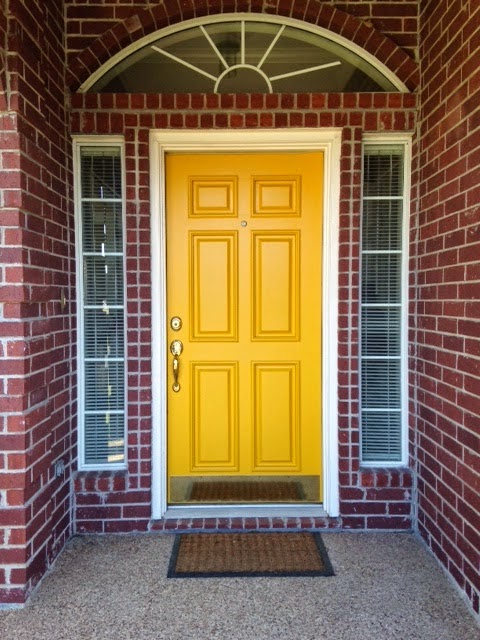 Learn American history. I recently realized how little I know about American history. My fifth grade teacher spent 30 minutes a day covering the Revolutionary War through the Civil War, but after I graduated from Mrs. Nowakowski's class I never saw another American history text book. Not in middle school, high school, or college. As an educated adult and the parent of a school-aged child who will soon embark on his own journey to learn about the history of our country, I find this gaping hole in my education appalling, so much so that I'd like to begin filling the gap. To be clear, my goal isn't to become a history buff. My goal is to understand a bit more about who we are and where we came from…and to be able to hold my own should I ever appear on the game show "Are you Smarter than a 5th Grader?". (D-)
After I posted this resolution, my mom sent me The Complete Idiot's Guide to American History, 5th Edition and my father-in-law sent me the "History of the United States, Volume 2" DVD collection. I cracked open the first chapter of Idiot's right away, and despite reading slowly and carefully and studying the "key points to remember" at the end of the chapter (which was only a few pages long, mind you), by the following night it was as if I'd never even opened the book. On the second night I reread the first chapter and read the second chapter for the first time. Once again, by the following night all of that information had been erased from my memory. I can remember what I wore on my sixth birthday, but I can't remember a single historical date other than the day of JFK's assassination. (And that's only because November 22nd is also my birthday.) I plan to start the DVD series on vacation though, so perhaps I'll retain more information via that method of learning.

Learn Texas history. What better time to learn about the history of my current home state than while I'm already learning about the history of my home country? I hope these history "lessons" turn out to be educational, yes, but also fun and something Will (and maybe Hallie, in some cases) and I can enjoy together. (F)
I actually forgot about this resolution, and therefore made absolutely no progress toward its completion. I found a fun, educational website - www.apples4theteacher.com - though, one that offers a variety of activities that I think both kids can enjoy (trivia for Will, coloring pages and craft projects for Hallie, and puzzles for both), that I plan to visit with the kids during our downtime in August.

Read books and watch movies. It seems silly to include reading and movie watching on a New Year's Resolution list, but because I have trouble finding the time to do both, onto the list they go. (A)
Here are a few of my favorite books and movies from the first half of the year, along with what's next on my reading and viewing lists.

Next up are Don't Kill the Birthday Girl, In the Garden of Beasts, If I Stay, Sharp Objects, Accused, All Fall Down, and The Fever. Oh, and I plan to reread all three books in the Hunger Games series in preparation for the Mockingjay, Part 1 movie release in November…

Yet to see are The Impossible, Ender's Game, The Monuments Men, Draft Day, Noah, and Maleficent. Coming soon are Tammy, Earth to Echo, The Maze Runner, The Box Trolls, Serena, If I Stay, Gone Girl, Annie, Into the Woods, and of course…Mockingjay, Part 1.

So how are your New Year's Resolutions coming along? July is the perfect month during which to revisit - and maybe revise a few - of them!

For fun, I calculated my GPA based on the letter grades I gave myself above. With a 2.07, I'm not exactly acing my resolutions but I'm not failing either!
Posted by Chasing Roots at 4:00 AM