1. The summer before kindergarten, I bought Will a pair of brightly colored, "super fast", lace-up athletic shoes and explained that once he learned to tie them, he could wear them. After I showed him what to do, Will spent a few days practicing next to me and a week or so practicing on his own before he finally mastered this new skill. And then he spent half of each kindergarten recess tying other kids' shoes.

Last weekend Hallie tried on a pair of beautifully pink, "super fast", lace-up athletic shoes. I agreed to buy the shoes for her, but only under the same conditions I'd given Will two summer prior: once she learned to tie them, she could wear them. You guys, she freaked out. Right there in Academy. She was NEVER EVER EVER going to learn to tie so if I didn't buy her a pair of velcro shoes I might as well resign myself to her going barefoot for the rest of her life. Drama queen.

At this point I kind of lost Will - he'd gone to the bathroom and gotten distracted on his way back to the shoe department - and after searching for him and finding him and reprimanding him and hugging him, I couldn't find the mental strength to do anything except buy the darn velcro shoes for Hallie.

Two days after causing a scene in the Academy shoe department, Hallie came to me and told me she wanted to learn to tie. So like her. Using an old pair of Will's shoes, we started the process. She melted down and we took a break. 10 minutes later we tried again. She melted down again and we took another break. 10 minutes later we tried a third time. She nailed it.


And now I have to buy her a pair of beautifully pink, "super fast", lace-up athletic shoes that aren't three sizes too large for her feet.

2. And while I'm on the subject of Hallie, she deserves a second high five for making true progress toward learning how to swim. It took three years of swimming lessons and regular exposure to the water for her to willingly set foot in a swimming pool or lake, and then last year she finally agreed to put her face in the water. This year she's finally less timid, and though she requires very specific assistance ("hold your hands like this, now take one teeny tiny step closer") when swimming or jumping off the side of the pool, she's swimming and jumping off the side of the pool.

3. Our first look at Mockingjay, Part 1 was released this week! This teaser (not a full trailer) plays like a PSA in which President Snow - with a brainwashed Peeta by his side - subtly threatens the people of Panem to follow blindly…or else. I can't wait for November 21st!

4. Today we hit the road for our fourth annual summer pilgrimage to Wisconsin. Just like in years past, we plan to first spend time with my in-laws at the Lincoln Lodge outside of Minocqua, Wisconsin, and then travel (ever so slightly) south to my hometown of Madison, Wisconsin to spend time with my parents and my sister's family. Unlike in years past, this year we're driving all the way there and all the way home. (Last year we drove to Nebraska and then to Wisconsin a week later, but at the end of our trip we flew home.)

And though it may be hard to believe, all four of us are looking forward to kicking off our vacation with a three-day road trip. For the first time in … forever? … (sorry, I couldn't help myself) … we plan to take it slow. We plan to brake for small towns and fruit stands and ice cream shops and parks and scenic overlooks. We plan to enjoy the journey.
Lest you think I just told the Internet that our house will be abandoned for the next four weeks, I will also share with the Internet that a friend will be staying in our house the first week we're on the road, and then after that, Tom will return home.

5. Happiness Highlights
And last but not least, they insisted on getting the mail for me during the downpour instead of waiting for the rain to let up. What great helpers! 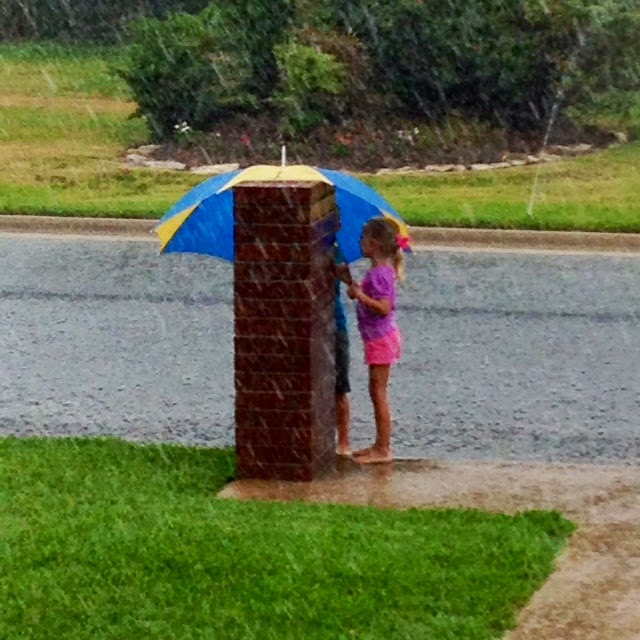 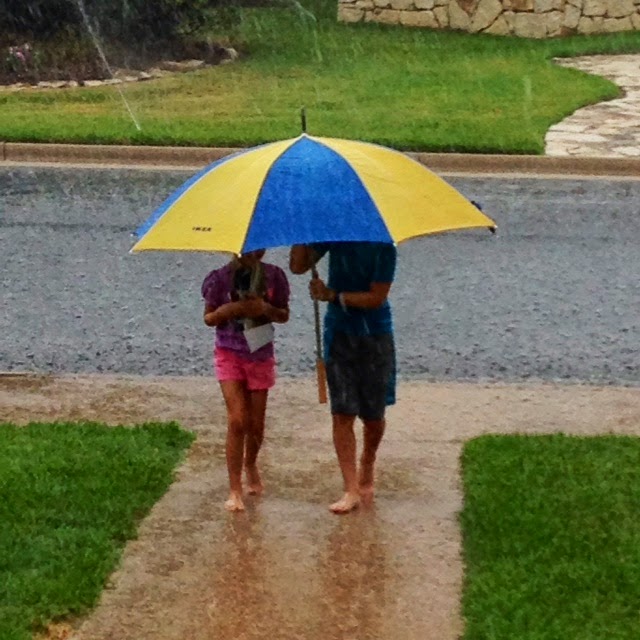