If Patience Was a Super Power, These Two Would Wear Capes

One night back in January, while sitting outside on the patio with beers in hand, Tom and I, along with our friends, Stacey and Aaron, began discussing the upcoming tee-ball season. On that evening and perhaps after one beer too many, we came up with what, at the time, seemed like our best idea to-date: Tom and Aaron should co-coach Will and Logan's tee-ball team. Our families would get to hang out together more often, and Will and Logan would be guaranteed placement on the same team. 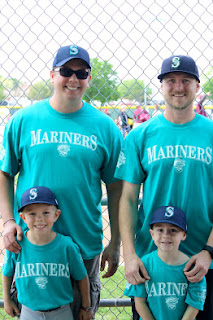 The following morning the idea seemed slightly less great, but rockstar dads that they are, Tom and Aaron both agreed to follow through with the plan. (I REALLY wanted Tom and Aaron to coach - I knew they'd be just awesome - so I made a deal with them. If they handled all of the baseball, I'd handle everything else: communication with the team, communication with the league, uniforms, snacks, trophies, etc.) None of us knew what we were getting ourselves into.

Coaching youth soccer was physically and mentally challenging, but tee-ball? Tee-ball is an entirely different ball game. Soccer teams (at least when the kids are in preschool/kindergarten) have six or seven players. Tee-ball teams have 11 players. Soccer games generally "work" as long as kids kick the ball and run in the right direction. Tee-ball requires kids to throw and catch and swing a slender bat, that in some cases weighs as much as they do, in hopes of making contact a teeny, tiny ball. (Whoever thought it would be a good idea to give METAL STICKS to preschool and kindergarten boys clearly never parented or coached preschool or kindergarten boys.) Tee-ball requires kids to run in four different directions and at specified times. I mean, at our first practice, when Tom and Aaron introduced the bases and asked the kids to "run home", one kid took off toward his car so that he could go HOME.

But Tom and Aaron, and a another dad who stepped up to help out, have been - as I knew they'd be - just awesome.  I'm so proud of them, not only because they totally keep their cool out there (one parent actually asked me what Tom and Aaron "take" in order to survive/smile through the hour-long games), but because they're making a difference in the lives of these little boys. Yes, they're teaching baseball skills. But they're also promoting physical fitness, exemplifying good sportsmanship, and making baseball FUN.

And in the eyes of these two, they're also superheroes. 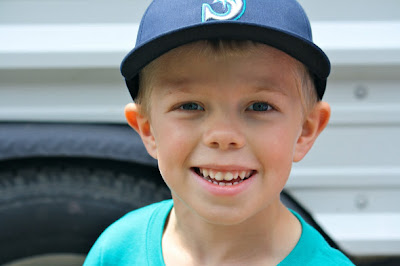 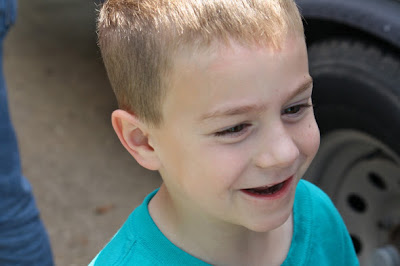