One of my New Year's resolutions was to "make at least one new vegetarian meal each month and share my family's favorite recipes here on the blog".

Since the beginning of January I've made and three of the four Ferri have willingly tried (Hallie doesn't try anything willingly) close to 10 new vegetarian recipes. Out of these 10 or so main dishes, a few were delicious, a couple were barely edible, and the remainder "would have been better with chicken", according to Tom.

Here are the five recipes I enjoyed enough to pass on: 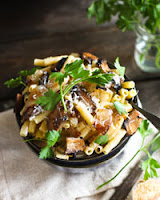 1. Ziti with Portobello Mushrooms, Caramelized Onions, and Goat Cheese
Adaptations: I cut the amount of olive oil from 4 T. to 2 T. (1 T. to brown the onions and 1 T. to cook the mushrooms), replaced the goat cheese with feta cheese, and used closer to 5 T. of Parmesan cheese.
Comments: I enjoyed this rich and savory pasta on its own, but Tom thought it wasn't quite substantial enough to stand alone as a main course at dinner. I'll definitely make this recipe again (using my adaptations), but next time I may prepare the dish in the morning and then package up individual servings for lunches.

2. Cheesy Black Bean and Pepper Enchiladas
Adaptations: I skipped both the jalapenos (for me) and the cilantro (for Tom), but other than those slight adaptations I followed the recipe exactly.
Comments: Quite a few... First, I made the mistake of using peppers I'd cut and frozen the week prior and then thawed that afternoon. Going this route saved me time that day, but resulted in softer-than-ideal peppers and extra liquid in the sauce. Second, when I make this dish again I'll leave out the spinach. I really like spinach, and I regularly sneak it into pasta dishes and smoothies, but I just didn't think it made sense in this recipe. And third, while the flavors in this dish were excellent, this time around I agreed with Tom that the recipe "would have been better with chicken". In summary: use freshly-cut peppers, leave out the spinach, and add chicken. So it's not really a vegetarian dish anymore...

3. Creamy Tomato Tortellini Soup
Adaptations: I cut the amount of olive oil from 2 T. to 1 T., used three cans of condensed tomato soup, omitted the sun-dried tomatoes (because I don't like them), used fat-free half-and-half, and because I didn't have any Italian seasoning, I added close to a tablespoon each of oregano and basil and about a teaspoon each of rosemary and thyme.
Comments: This soup was outstanding and will definitely be included in our late fall/winter soup rotation next year.

4. Spinach Artichoke Pasta
Adaptations: Instead of 8 oz. of reduced fat cream cheese, I used 4 oz. of reduced fat cream cheese and 4 oz. of plain, nonfat yogurt because that's what I had on hand.
Comments: You know how spinach artichoke dip is addicting? Well, this spinach artichoke pasta is just as addicting. Three bites into the dish I claimed the leftovers. Four bites into the dish I realized that there probably wouldn't be any leftovers. Make this. Tonight.

5. Tortellini Italiano
Adaptations: I found a very basic version of this recipe in a magazine about a year ago, but throughout the last few months I've experimented with it and ultimately changed it quite a bit. So much so, in fact, that at this point it's easier for me to type out my recipe (below) rather than to hunt down the original and then list all of my adaptations.
Comments: I absolutely love this dish, both the first time around and as leftovers. If I owned a bigger skillet (the recipe requires a pretty good sized skillet as it is), I'd double it every time. If you're not up for Spinach Artichoke Pasta tonight, make this instead.

Cook the tortellini according to package directions. Drain, rinse with cool water (so they won't stick to one another), and set aside.

While the tortellini are cooking, saute the red pepper, green pepper, and onion in olive oil in a very large skillet for approximately five minutes. Add the green peas (and minced garlic) and continue cooking for two more minutes.

Add the tortellini to the vegetables/sauce mixture and serve immediately.

I'm always looking for new vegetarian recipes, as well as interesting "themes" for my seasonal Kitchen Challenges, so if you have any great vegetarian go-to recipes or ideas about which kind of food I should challenge myself with next, please share!
Posted by Chasing Roots at 6:00 AM