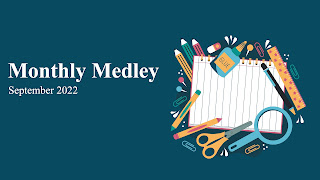 A little late this month, thanks to Will's birthday post last week...

SO.MUCH.WRITING. And I have a weirdly cramped finger to show for it.

I have two articles in the October issue of Insite Brazos Valley. The first features Aggie Replant, a TAMU environmental service volunteer organization. The second (which I think may have taken me more hours than any other article I've ever written) highlights 10 of the best outdoor patio spaces in the Brazos Valley.

I also have two articles in the September/October issue of Texas Living Magazine. The first is about Marion Koogler McNay, whose legacy as a collector and cultivator of the arts includes the McNay Art Museum in San Antonio. The second is about the increasingly popular Berdoll Pecan Candy & Gift Co. in Cedar Creek. Both were fun and interesting to write, and I hope they come across in the same way for readers. 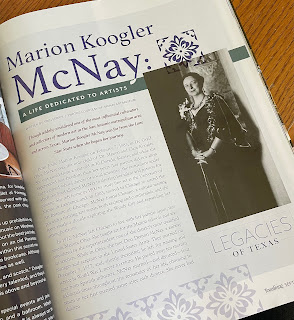 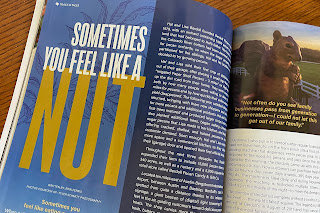 I've been cranking out content like crazy since the middle of July, and while most of what I've signed on to write will be submitted by the end of this week, I still have a bit more to do before I take a step back for Thanksgiving, Nutcracker, Christmas, and New Years.

This last month brought about a first - at least as a writer - for me: I turned down a job. Up until this point, I've never said "no" to an offer. I haven't felt accomplished or established enough, nor have I felt confident enough in the quality of my work, to not take every opportunity given to me. There were a lot of factors that contributed to my decision to walk away: the topic was too vague, the expectations were mildly uncomfortable, the compensation was too low, and the deadline was too close to - as in ON - Will's 16th birthday. I weighed all of these factors independently and could have handled one or two, but when they all piled on top of one another...at the end of the day I finally did what was best for me and my family, even if it made someone else upset with me. (I hate it when people are upset with me...) I'm so grateful for the opportunity to write professionally. I just have to figure out how to make this job "work" with, within, and for each stage of my life.

This month I picked up The Party, by Robyn Harding, on kind of a whim. It wasn't exactly what I expected, but it was interesting - and scary - to read this cautionary tale told, in large part, from the vantage point of a few high school students. A strangely suspenseful lesson in what not to do as the parent of teenagers.. 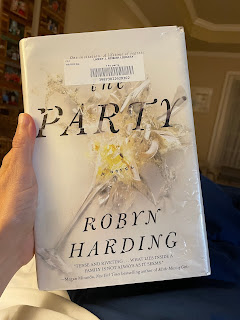 Tom and I watched The Old Man, starring Jeff Bridges, Amy Brenneman, and John Lithgow, on Hulu. We both really enjoyed this suspenseful drama and were excited to learn that the series has been renewed for a second season.

Hallie and I started an adorably sweet and clever comedy called Maggie, about a psychic woman who accidentally catches a glimpse of her own future in a vision about someone else. We're only about halfway through season one (so far there's only one season), and hoping the series is renewed because watching it makes us feel happy, as silly as that sounds.

On my own, I finished season two of Sweet Magnolias and then started The Lincoln Lawyer (the series on Netflix, not the movie). So far I'm a fan I desperately want to sink my teeth into season two of Only Murders in the Building, but since I want to binge this series, I need to wait until I have a little bit of free time so I can really sink my teeth into this mystery. So...Christmas break?

I started and then quickly cruised through (almost) two full seasons of the In the Dark podcast. Season one delved into the 1989 abduction of 11-year-old Minnesotan Jacob Wetterling, and season two investigated the accusations against Curtis Flowers, who has been tried six times - maintaining his innocence throughout - for a quadruple murder in a small-town Mississippi furniture store. I haven't quite finished season two, but I've seen on Facebook little snippets of what has unfolded for Flowers throughout the last three years and I can't wait to keep listening. 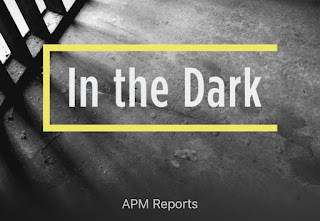 If you're close to my age (early-but-nearing-mid-40s), you'll probably appreciate and enjoy Thirty AF (@iamthirtyaf) on Instagram. I'm writing this post from my McOffice, and as I swiped through the page looking for a few images to share, I started laughing at the different quotes, memes, and videos. Like actually laughing. And then laughing so hard I started crying. By myself, in McDonald's. I'm not sure they're going to let me come back to my McOffice...

I've returned more things to Amazon this month than I have in the past six months combined: dance shoes that didn't fit, three different cat toys that broke within less than an hour of use, notebooks that weren't perforated correctly, and readers (yes, I'm close to needing reading glasses) that I didn't need after splitting a pack with a friend. I did, however, find a couple of cute cat toys that I'd recommend, so I've included those links below. Hoping for a little more shopping success in October!

I've become a HUGE fan of Fubo. We've been able to watch all of our sporting events, the morning news, and the nightly news live, and last week I discovered (just in time for season premieres) that IT RECORDS! Fubo offers everything we needed (and more, probably - we've yet to investigate all of its features), for considerably less money than we were paying the cable company.

I didn't bring home anything new this month, but my babies got new "outfits" ahead of the holiday season! 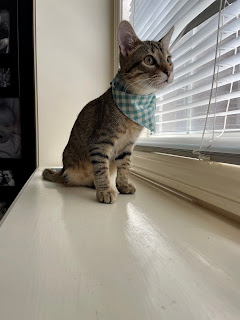 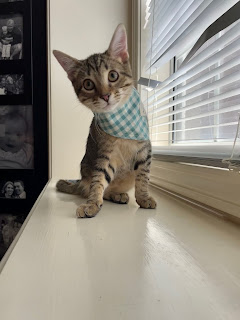 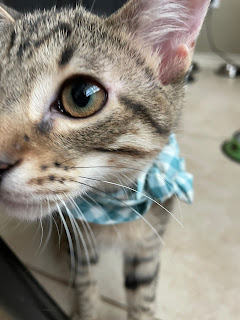 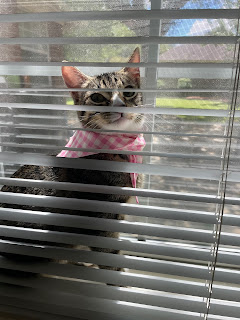 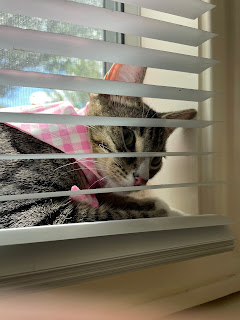 Popeye loved his bandana and wore it willingly all day. Plié hated her bandana and aggressively fought it until it was removed. Plié even tried to take Popeye's bandana off of him - clearly she thought he shouldn't be wearing one either. 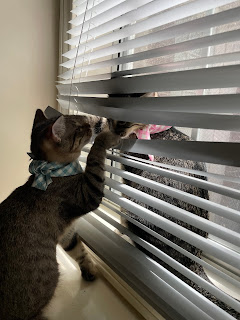 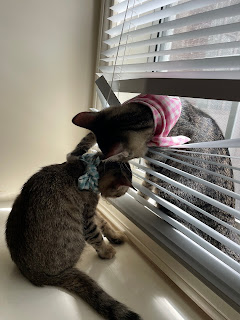 These Buffalo Chicken Lettuce Wraps were delicious, and SO easy. I made a smaller batch because I wasn't sure how well it would go over, but we ate every last bite.

(This month this category should instead be titled "Laughing About".)

Signing off for September, friends!