The Adventures of Plié and Popeye, Episode 1

When Tux was young, I regularly wrote about him as part of his own series called "Tuesdays With Tux". I decided that Plié and Popeye should have their own series too, but since there are no days of the week or cute words/sayings related to storytelling ("chronicles", "tales", etc.) that start with the letter "p", I chose - at least temporarily, while I wait to see how I like it - "The Adventures of Plié and Popeye."

I'm still considering "The Adventures of Pleeps and Pops", since those are Tom's nicknames for them as a pair.

Plié definitely behaves like the older sister she is: she takes charge of playtime, and because she's still bigger, stronger, and slightly more able-bodied than Popeye, she usually wins their wrestling battles. She doesn't care much for actual cat toys, but she LOVES rubber bands - specifically the more expensive ones I keep in a drawer in my bathroom. Every time I go into the bathroom, she joins me. She sits on the bathroom counter, waiting patiently for me to open the drawer for something else, and then she swoops in, grabs one of her favorite rubber bands, and takes off. Her second favorite toy is a plastic mask "expander" (something you'd wear over your mouth and nose but under your mask, one of which we have but never used from the beginning of the pandemic) - she can bat it around for hours...if I'm unwilling to open the bathroom drawer for her to get a rubber band. Plié also loves cabinets and drawers. If one of the kids leaves a cabinet or drawer open, she WILL explore it; no matter how high the cabinet or drawer is off of the ground, she will find a way. One evening Hallie was in the kitchen baking with a friend, and when they opened the (rather small) drawer where we keep the ziplock and trash bags, they found Plié sound asleep inside. 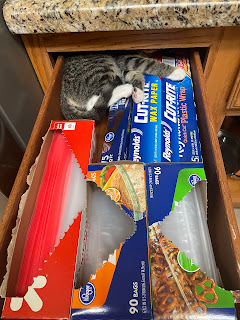 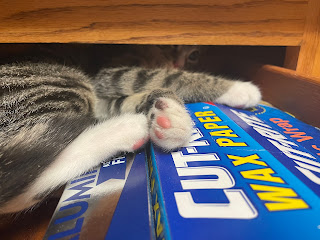 Despite my months-long efforts to keep Plié alive, Tom is her favorite person...all because of those gentle butt baths, I guess.

Popeye definitely behaves like the younger brother he is: he's full of mischief, and while he likes to rile his sister up, he usually loses their wrestling battles and then comes to cuddle with me...it feels a little like he's tattling on her. He isn't much of a jumper, given that he only has one back leg, but what he lacks in jumping ability he makes up for in climbing ability. While I frequently find Plié on the counters, I frequently find Popeye climbing his way up pieces of furniture, drapes, cat trees. Most of the time he can make it to his intended destination without help, but when he can't, he just hangs there and cries for me to come rescue him. Popeye prefers toys he can chase or bat around on the floor, and when he's tired from playing and settles in to rest, he still "scratches" his head with his phantom leg, which is adorable to us and confusing for him. Popeye's absolute favorite thing/place in the world is on someone's shoulder. He doesn't so much sit on our shoulders like a perch or lay across our necks like Tux did though - he likes the front half of his body to be hanging over our shoulders, and the back half of his body to be supported by our hands or arms. And he wants to stay like this for...well, for forever (or until his next meal)...which is actually kind of exhausting (see two of our solutions in photos below). When Popeye wants "up", he sits down next to us and nuzzles our legs, ankles, or feet with his nose. And once he is "up", he IMMEDIATELY begins to purr and snuggles in. 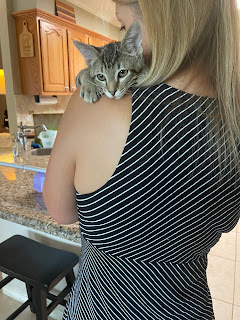 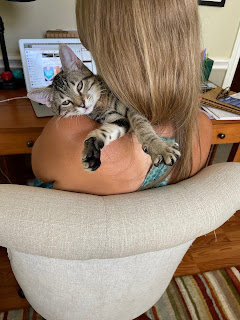 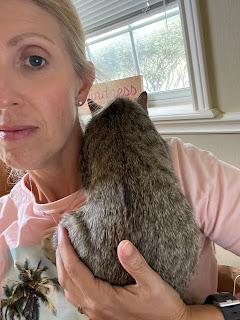 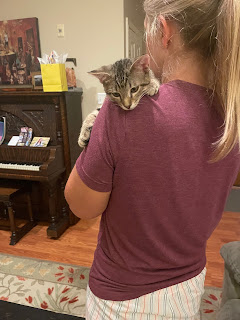 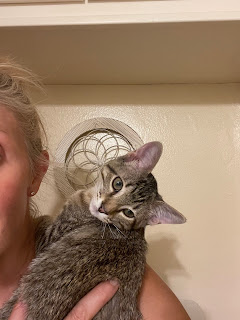 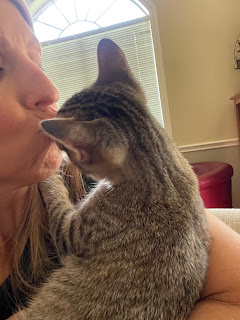 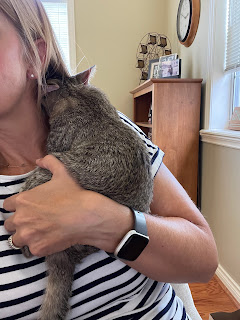 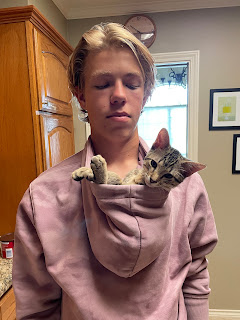 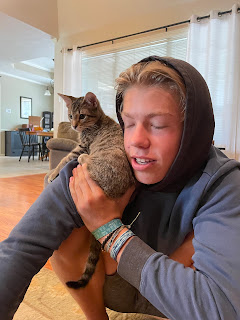 I think I'm currently Popeye's favorite, but the kids are a close second. He's not Tom's biggest fan though...I suspect he senses that Tom - as Plié's favorite - is already taken. 😂

We still miss Tux terribly, but these sweet babes have helped us transform some of our passive sadness into active love.