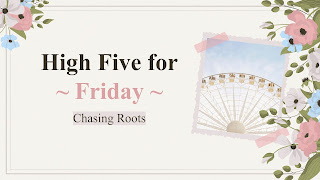 At the end of July, Hallie volunteered for the summer music/theatre camp at church. She attended as a camper (and played Noah's wife in an adapted version of Noah's Ark) last year, but because she had aged out as a camper this year, she decided to volunteer instead. She had a great time, and truly enjoyed both the freedom and responsibility that came with being on the backstage side of a production and the other side of seventh grade.

The only pictures I have from the entire week are of Hallie and Avery in the "super cool snack room where only the volunteers get to go and where they keep the really good food"...so that's what you get to see. 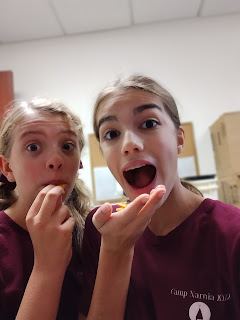 Earlier this summer, Will decided he wanted to play in a disc golf tournament. Generally he has/we have a fairly full schedule, but I agreed to let him participate if he could find a tournament that fell on a free(ish) weekend and he took care of the registration process himself. So he found a tournament that fell on a free(ish) weekend, signed himself and Tom up for PGDA memberships (which are required in order to play in the tournaments), and then signed himself and Tom up for the tournament...in the Amateur Advanced Division. Tom should have been in 40+ and Will should have been in Amateur Intermediate, but Will decided to take a chance. Their only goal going in was to NOT finish last, and they didn't! In the end, Will had a great time, Tom had a good time (Tom only participated to support Will - he wouldn't have entered a tournament on his own, as he doesn't need/want disc golf to become something he does competitively), and they tied with each other. So overall, the experience was a win!

The video below is of Will's "announcing" and his first ever PDGA throw. 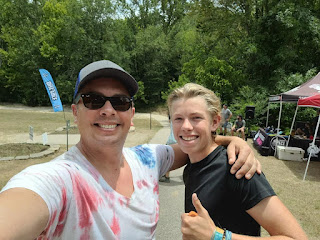 Hallie's last (and first) in-person intensive with Ashley Laracey - a soloist with the NYC Ballet and often our guest Sugar Plum Fairy for Ballet Brazos' production of The Nutcracker - was in 2019.

In 2020, Ms. Ashley taught the intensive virtually from New York while the dancers were masked and together in the studio here in Texas, and 2021, Ms. Ashley was unavailable so our annual August intensive was taught by other instructors.

But last week, after three long years away, Ms. Ashley returned and Hallie was able to spend the week learning from and dancing with her. 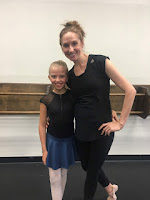 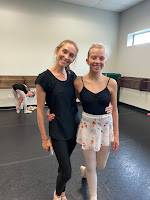 Something shifted in Hallie last year. I think finally connecting with her ballet instructors and beginning pointe work ignited the fire, but since then the flames have been fanned and the fire has grown; where there was once indifference toward ballet (and even dislike, when she was in early elementary school), there is now a slowly growing passion and a strong desire to improve. She's been working SO hard at a genre that doesn't come naturally to her, and I'm ridiculously proud.

She'd want me to tell you that she can do harder skills than those demonstrated in this video, and that her shoes were completely dead by this point in the intensive, meaning they weren't working as well for her in terms of stability. She's since gotten her second pair of shoes.

✔ Schedules and IDs have been picked up and scheduling and ID issues have been ironed out. (Bless all of the counselors out there, who are desperately trying to make every student's schedule work for them in as many ways as possible.)

✔ All of Will's medical paperwork has been filled out, signed, copied, and along with his multiple emergency medications, turned in to his school nurse. (This task - or series of tasks - takes me HOURS every summer. I'm not complaining about helping the nurse be prepared to care for Will in case of an emergency. But I regularly think about how this process could be completed more efficiently and in a way that didn't require me to print 15 pages of blank documents, fill out 15 pages of documents exactly as I'd filled them out the year prior, make two trips to the allergist, make two trips to the pediatrician, copy 15 pages of completed documents, make two trips to the pharmacy, and finally drop everything off with the nurse. I worry that the amount of legwork required keeps some parents/families/caregivers from actually doing the paperwork, which leaves their kids vulnerable and unsafe at school.)

✔ Both kids have enough clothes and shoes to get them through the first couple of months of school.

✔ Both kids have enough basic school supplies to get them through the first couple of weeks of school. (School supply lists aren't generated for older kids - once classes start the teachers let the kids know what they'll need for that specific class.)

In the last three weeks, and between me and both kids, we've fit in the following:

Thankfully - "high five" - everyone and everything is fine. I share all this 1) because everyone and everything being healthy-ish is something to high five about, and 2) to remind you, should you or someone you love need the reminder, to make and keep your regular/annual preventative and/or maintenance health-related appointments. Stay healthy, my friends.
We have other appointments throughout the year, of course, since we go to the dentist twice annually and the orthodontist every few weeks, for example. But I intentionally cram as many of our health and wellness appointments into the end of July/beginning of August so everyone knows they're coming and everything can be taken care of ahead of the school year.
Happy weekend, friends!
Posted by Chasing Roots at 5:00 AM