We made it through 46 kittens before our first foster fail. 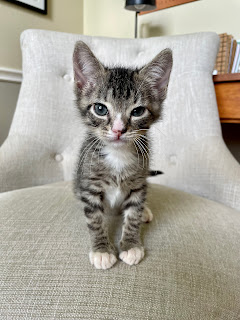 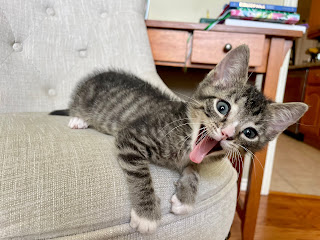 When Tux was alive, we regularly acknowledged our plans to add a second cat to our family when we found a foster we ALL - Tux included - loved. We never found a cat Tux approved of though, so he remained an only cat until his death late last December.

We knew we could never replace Tux, but we also knew that at some point we wanted another cat and that we would find that cat through fostering...we just didn't know it would happen so soon.

Plié, along with her brothers Adagio and Bourreé, came to us on March 31st at three weeks old. Adagio was the biggest at barely half of a pound, and all three were so tiny their entire bodies fit in the palm of my hand. They were terrible eaters - they couldn't figure out nor did they seem all that interested in the bottle, any kind of food out of a dish, or water - and didn't yet understand how to use the litter box. I fed (attempted to feed?) them every four hours around the clock, with varying levels of success, and after a week of struggling to get them to gain weight and choppy nighttime sleep, I was exhausted. For a period of time I had to "rake" wet food into their mouths (putting the food on my finger, and then raking my finger across the roof of their mouths so the food would catch on their tiny teeth and they would *sort of* eat it) and all of my fingers were cut up and raw from the process. At various points they all had diarrhea and coccidia and were on medications for these ailments, and Plié's got so bad that her entire behind and the insides of her back legs became horribly raw and inflamed (and her legs lost most of their fur) and she needed another special medication to heal those areas. After their spay/neuter surgeries, Plié and Adagio developed an uncommon side effect to the anesthesia: they stopped eating completely. We tried EVERYTHING to get them to eat, but nothing worked, they each lost a significant amount of their body weight over a span of five days, and eventually both had to go on yet another medication to control their nausea and increase their appetites. I had never worked harder to keep kittens alive, but Plié in particular needed SO much help and intervention - and she was/is the sweetest of the bunch - and there was a point at which I just knew I couldn't give her to someone else to raise. 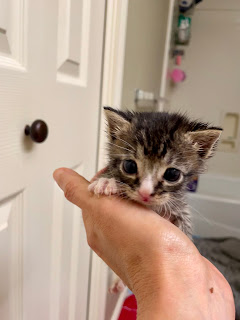 I saw a Tiktok challenge that had people post the moment they knew their foster would become a foster fail. Here was my moment: 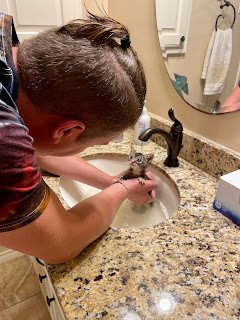 When Plié had coccidia and diarrhea and her little butt and legs were raw and inflamed, we had to regularly rinse the poop off of her back/bottom half. Tom was particularly good at this job, and she seemed to feel safest and calmest when he bathed her compared to when Hallie or I did it. On this day I was standing at the ready with the towel, and thankfully my phone was nearby so I could capture this moment - I knew right then that she wasn't leaving us.

We decided not to keep Adagio and Bourree because while they were/are delightful kittens, they didn't actually get along with Plié all that well. So because cats almost always do better in pairs, we're now "in the market" for a sibling for Plié... 😉 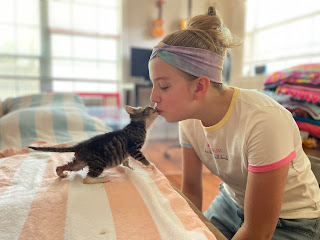 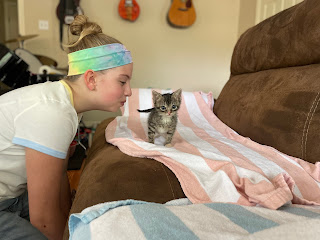 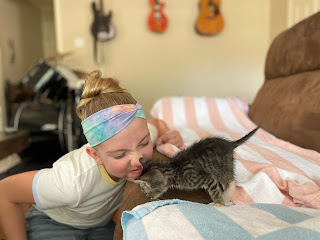 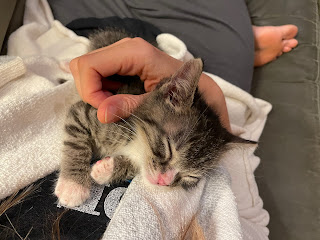 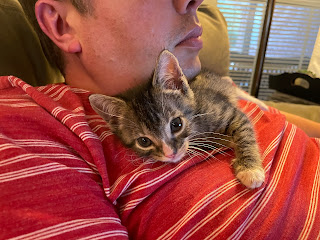 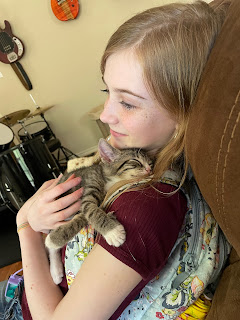 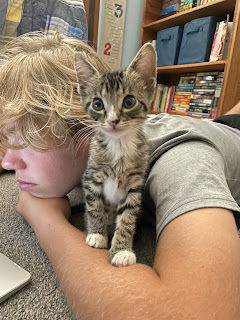