Reading
I've read and enjoyed all of Ruth Ware's books, and Turn of the Key was no exception. I wouldn't rank this one atop a list of her mysteries, but it kept me far more engaged than the many books I started and didn't finish in September. The protagonist's narration takes the unique form of letters written from prison to a defense lawyer she hopes to retain*, and I appreciated the occasional grounding in real time - checking in at the beginning and end of each letter - this storytelling tactic allowed. 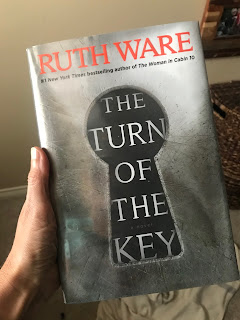 * This isn't a spoiler. If you decide to read Turn of the Key, you'll learn of the protagonist's status as a convicted criminal almost immediately.
Watching
Rather than typing out the list of movies Hallie and I have and haven't watched every month, I added all of the titles to a Google doc affectionately titled, "Corona RomComs". Next up and just for fun, Hallie and I plan to analyze each movie in order to award it an agreed upon letter grade. Feel free to follow along on our Corona RomCom journey by checking out our list here!
This month we added the Father of the Bride "trilogy" to the list. We both loved the original and liked the sequel, but we had slightly different thoughts on the made-for-YouTube third movie; I thought it was adorable and endearing, while Hallie didn't quite get it. I should also add that she "didn't get" why I cried my way through all three movies. I explained that when I watched one and two for the first time* 25 years ago, I pictured myself in the role of and could relate most closely to the daughter, Annie. But when I watched both as a 41-year-old mother of a teenager and a tweenager, I pictured myself in the role of and could relate most closely to Annie's mom...imagining my kids getting married and having babies felt entirely too real and just about broke me. 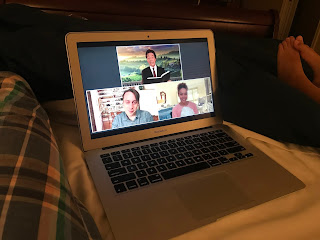 * Father of the Bride was my favorite movie for years and I used to watch it monthly...that is, until I wore out my VHS cassette tape. 25+ years later, I still have George Banks' opening monologue memorized. Hallie was legitimately IMPRESSED with my skills.
We also added My Best Friend's Wedding to the list, but it scored as low as any of the movies we've watched thus far. Hallie just wasn't all that interested, and I was surprised to discover that as an adult I found almost all of the main characters annoying in one way or another.
Listening To
A few months ago I mentioned the podcast Uncover. At the time I had only listened to season one, but I found it intriguing (exactly what I'm looking for in a podcast that keeps me company while exercising) enough to both recommend the podcast and move on to the next season. But after I started and couldn't get into seasons two and three, I took a break from the podcast until this month. Seasons four, five, and six peaked my interest the same way season one did, and I quickly cruised through all of them. The verdict is still out on season seven, which I just started...
I also just downloaded both Brainwashed (highly recommended) and Daughters of DC (basically forced upon me by the local radio station's incessant advertising); I'm looking forward to letting you know next month if these two podcasts are worth your time!
Following
Trying/Using
I bought this Haagen-Dazs Heaven Cold Brew Espresso Chip ice cream on a whim, and OH, what a whim it was. I don't usually like light ice creams, but I wouldn't have known if I hadn't seen the word "light" on the container. 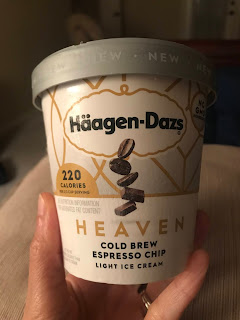 A few weeks ago I got an email from the make-up and skincare company alleyoop, promising me a $20 credit toward anything in their online store if I pledged to vote. It seemed a little fishy, but since I of course planned to vote anyway, I made the pledge and not 30 seconds later found a coupon code for $20 off in my inbox. I used it to purchase this eyeshadow (in bronze medal), which I had wanted to try and happened to cost exactly $20, and I love it!
The best part? (Well, maybe not the best part, but ONE of the best parts...) The eyeshadow arrived in packing peanuts, which initially rubbed me the wrong way. But after I'd tossed them into the trash, I saw this note in the box. 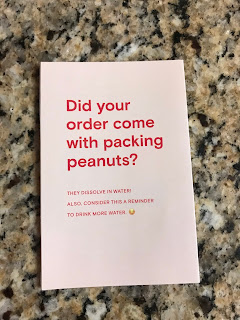 REALLY?!
I pulled every single one of those packing peanuts out of the trash and put them in a bowl of water. Sure enough, they dissolved. Way to go, alleyoop. Between your commitment to democracy, your generous coupon codes, and your commitment to the environment, you've got yourself a customer. 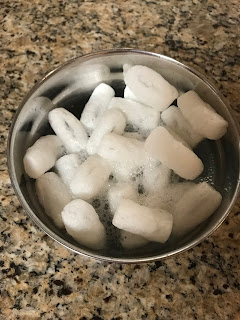 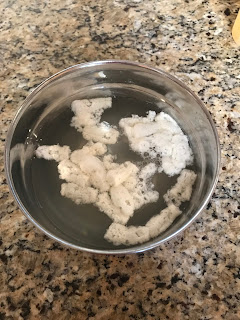 Wearing
Look at Hallie's adorable summer sandals! (Don't worry - it's basically still summer here, at least by my standards, so she'll have a lot more opportunities to wear them before the weather officially turns.) I bought her a size up so she could get a second summer out of them, but wearing them a little big hasn't been an issue. 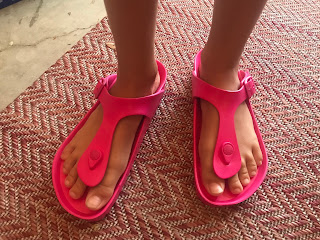 After years of dealing with plantar fasciitis and wanting to keep this condition under control as much as possible, I only wear shoes with arch supports (I make exceptions for fancy dress shoes, of course). Hallie and Will haven't developed any issues yet, but given how active and athletic and active they are and that both (will eventually) come by foot problems genetically, I try really hard to keep them in quality shoes. (My mom is the queen of foot issues, and she passed a couple of those issues on to me and the rest of them on to my sister. It's likely one or two will make it to Will and/or Hallie.) These aren't cheap as far as sandals go, but to me they're worth the price.
It wouldn't be a monthly medley if I didn't provide an update on my newest quarantine shirts and Starbucks to-go cups, now would it?
Eating/Drinking
October was - and should always be, in my opinion - a delicious month. Typical fall foods like chili, soups, anything with apples, anything with pumpkin, and warm beverages that make my house smell divine are my absolute favorite.
Feeling Good About
What's new and interesting in your world this month?
Posted by Chasing Roots at 5:00 AM